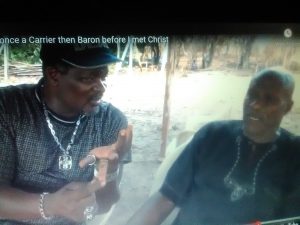 BoN during the interview with Pastor Oluremi

………I was a drug Courier  for many prominent Nigerians

…….Traveled with 400 grams day Ojulope,Ogedengbe and Owoh were killed

…….I was the only child of my mother

…….Now with a Doctorate degree and a Born-Again

Meeting  the Man of God is interesting. He is a reporter’s delight . Pastor Oluremi Peter is a very popular  and respected Man of God in Owo , Ondo State .His church is one of the most fast -growing churches with a large number of congregants. He is a prayer Warrior and has delivered many from their infirmities.Barren women have good stories to tell . Pastor Oluremi in this interview tells his story of how he met God after many years of carrying drugs.

My name is Oluremi Peter, I am 59 years old

How did you become an Evangelist

” Bearing an Evangelist is a thing of  spiritual , not an in-born thing , the time that the gift began to manifest was about 18years ago. when I went through CAC Seminary  , Ilesha for two years  then became Associate Pastor  in 1999 in Efon Alaaye .To be  an Evangelist is a gift from God .I am a Prophet /Evangelist  by call but ordained as a CAC Pastor in 1999.

I was once a Courier then Baron now Man of God

”This is a very big question . I went through life . At the tender age of 19 I had been self-employed , traveled abroad and doing all sorts of  business . I can say precisely that I am what I am today by the grace of God  as  per  what I had gone through in life.

”I used to say that anybody that  cannot relate with his past is not really a Born Again .

”Before I met Christ on the 5th of August 1996 I used to be  a traveler to the USA, and several countries. I used to be an international business man, I deal with drugs traveling  to  USA  several places , dealt with hard drugs like cocaine , I swallowed it  to the USA and would escape it.I  would sell it and come back to Nigeria.

I PASSED THROUGH MANY AIRPORTS

”There are several airports  in the world , mostly I passed through JFK Airport severally  in all the trips .God was precisely with  me   until I met God  on the 5th of August 1996. I lived in hotel room for seven years in Lagos  where I met God on that fateful day. He gave me three lashes and I woke up  and with the instruction ”STAND UP, PACK YOUR LOAD AND GO HOME”. I stood up from my sleep , sat down and was wondering what was happening  but the instruction kept on coming ”STAND UP, PACK YOUR LOAD AND GO HOME ”So I stood up packed my things and left the hotel room in Lagos , that was how I found myself in the seminary on the 5th of August in 1996 where I spent two years in training  and by His  Grace has remained steadfast  in His vineyard . 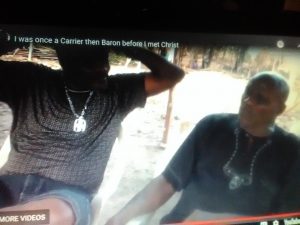 The Man of God telling his story

”I went through a lot of journey of  life .All those period I never knew God , I never had no reason to pray because there was no reason to pray  about . I had money I had influence , there were women around me and I didn’t go to church .Though I am from a very very religious  home .I am the only child of a woman who was a midwife for CAC church for 25years, very dedicated woman .I am a product of grace.

”During this period  I was married with children .I had children .Nobody was aware of what I was doing .I never  discussed my personal life with anybody , it was just between me and God. 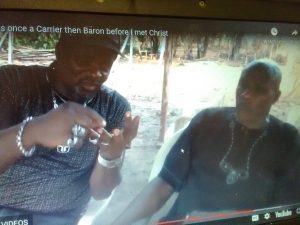 When I heard such instruction that I should pack my things and go home .I went to my mother in Owo and told her . I said this was my experience … I was later ordained as a Pastor in 1999.

” While I was ..to the things of the world …I didn’t acquire much, I made my money and I spent it on women , I lived in hotel  for seven years . I bought cars , I bought land  and enjoyed myself  my brother until the grace of God came into my life.

WHERE ARE THE PROPERTIES

”The properties?. We are talking about 18years ago ?. I lost all of them even my passport was stolen with visa to the USA , England, to Germany was stolen twice. It was dawning on me that the hands of  God was working  and finally struck.

”I didn’t go to school as such ,  but I have School Certificate which is the only visible certificate  I had before I met Christ. Later I went through a lot of schools of Theology , today I  have  doctorate degree in Theology (Phd) . I don’t have  much education .I speak good English by the grace of God.

‘Its not about being profitable , its never my dream to become a pastor but divine because I remember my mother told me she was barren for 18years and when she met a prophet who told her she would bear a son  and the child would be a servant  of God , must be given to God  Immediately I am being weaned and come of age . So, when I was six years old I was given to a Pastor where I went to secondary school, and went away from the presence of God until I finally met God in 1996. Between 1976,77 to 1996  I never went to church. 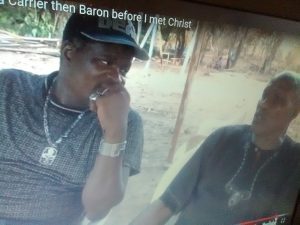 ”Yes , of course there was and is . Can you take temptation away from this work?, we are only being sustained by the grace of God  , so like you  said  when I was much younger.  I remember I was traveling from Murtala Mohammed  Airport, Lagos  to JFK  when our plane broke up, one wing of the plane broke off,. we had to wait for 18hours in Lagos  and I had about 700 grammes of cocaine in my stomach .Right there one or two women were chasing me , one was going to Texas , she had to stop in New York and went to my place in New Jersey, so the issue of women was a thing of pleasure in those days .Paul said ‘I am what I am  by the grace of God ,he said ‘ yet not I  but the grace of God’. So I want to thank God for His grace in my life.

”Whenever  I arrived at my destinations  I would go and lodge in an hotel then contact my customers.

”At a time  I was a carrier for some prominent   Nigerians then later I became a Baron  myself, doing it for myself.

”You are asking too many questions. I visited a lot of countries . I remember precisely this particular incidence , the very  day that   Idiagbon(the late Major General Tunde Idiagbon) killed Bartholomew , Ojuolape  and Bernard  Ogedengbe , I remember I  traveled that night  to deliver  400 grammes of cocaine  (In Denmark)  for I was already billed for that trip.I watched them being killed , and for the same offence these people committed  were killed for  I still traveled for the same offence  I have a special grace. Ojuolape was the only child of an 85year -old- woman . I felt so bad  about the death of the young man because the man was on bail  that time before the Decree of the ’85 came out , they now rolled it back .Ojuolape was the only child of the old woman , they asked Idiagbon to leave  her son because the boy was already on bail before the decree was enacted  and he was roped in and was killed .It was sympathetic”

WATCH THE VIDEO FOR THE REST OF THE STORY