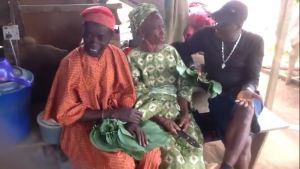 No bottled palm wine or gourd hung on the tree or displayed  on the table to advertise  her product ,  palm wine  .There was no signboard or any sign post to show the way to Mama Elemu’s place. By 10 am  on that Saturday her shop at Idashen  , Owo  had been jam packed  by   customers who wanted to eat  cornmeal (egidi) or pounded yam, bush meat  and to drink palm wine. 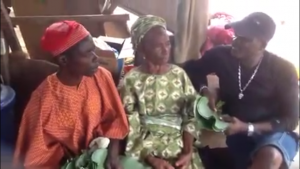 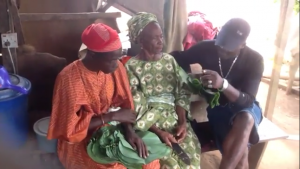 Chief Adewale, Mama Elemu and BoN during the interview

For the Owo natives who love palm wine  this place is their choice. For visitors this place is where they would enjoy their evening with full satisfaction. For Owo  natives in diaspora especially those  who   live in Chicago, Illinois, Texas, California,Las Vegas,Missouri , Carolina or Washington DC   the moment they landed in Owo ,they would all go straight to Mama Elemu’s place in Idashen. If you live in  the European countries   and come to Owo your  enjoyment is not complete if you have not been  here to  taste the undiluted palm wine called aroso. 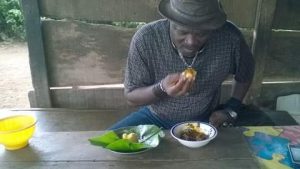 When this reporter got there he burst into  Kegites songs , singing while eating the  cornmeal (egidi) wrapped in a leaf  with local soup (obe oogun) and egunsi soup .The  fresh bush meat ( grass cutter and antelope ) were cut into pieces and tied with strings to avoid falling off. Seeing how she displayed the bush meat in a special pot  could make a customer be salivating !

She is  very neat and at her age, in her 80s   she  still possessed good retentive memory. She is jovial ,she  loves visitors and sell what you can hardly find in other places.Yes, she sells bush meat, fresh and undiluted palm wine.

As she alighted from the cab, the driver assisted her to offload two rubber kegs of palm wine , all  ‘foaming’ from the mouth. The aroma wafted in the air and immediately the customers stopped to drink the water they held in their hands  and rushed towards the octogenarian woman asking to be served .This is Mama Elemu.

She is a woman of few words , she said “My name is Bako Rachael, I am over 80years .I have been selling palm wine for the past 50 years.I am well known in OWO.I sell original palm wine .From the proceeds of the my business  I have trained my children in school and have a roof over my head” .She continued ” I sell bush meat and with local soup and use leaves to wrap my pounded yam or cornmeal and their  taste is different from the ones wrapped with a nylon and kept in a cooler.Big men come here to buy my Palm wine and food”, she said as she was cleaning the leaves to be used to wrap the cornmeal.

As she brought out the drums of palm wine  and one could see the palm wine ‘foaming’ from the mouth and the body  of the container ‘sweating ‘ too.

Ask her for a cup of palm wine, she will tell you ”My palm wine is a special one.I don’t dilute it .I also sell bush meat with native soup [obe oogun] that goes along with egidi (cornmeal). Yes, you are at home for she will not put the egidi in nylon but wrapped in a  green leaf  , as everything is local.

WHAT HAPPENED IN LAGOS

When I  got to Lagos in the evening and   brought out the five litres of  palm wine I  bought  along  with the bush meat  and I entertained my friends with it and we    started    dancing and singing . The evening gathering was turned to Tales by Moonlight as friends told  stories and the most interesting one was why  an empty palm wine  gourd should not be  placed sitting like  the full one . I  told them  the story behind it “One day Ogun was coming from the farm , and the sun was hot , very hot. Ogun was thirsty , very thirsty. Ogun  passed a palm wine joint ,passed a palm wine joint( repeat)   but was neither greeted nor invited for a drink by  these drinkards , and this was according to the instruction and rule that there should not be greetings at that Ajo Oriki Spot, and this was according to Ogun’s instruction too!.  While   Ogun moved on but suddenly  he heard them laughing hysterically. Ogun thought he was been mocked . In annoyance Ogun went back to these drinkards and beheaded all the nine .As he finished the  massacre he sat  down to drink from the ‘sitting’ palm wine gourds.But lo and behold , all were empty , but the deed has been done. Ogun lamented.He regretted his action. and since then he  instructed all palm wine drinkers to always place the empty gourd lying down”.

WHAT HAPPENED TO ME  IN BRANSON 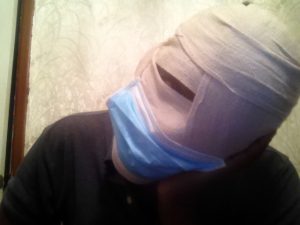 My head in bandage

As  I opened my eyes at the hospital bed  I discovered my head had been bandaged as well as my nose  and my  left eye. The surgeon said my skull had cracked .My left eye was to be replaced with artificial eye.My left hand was as heavy as lead  and  in   plaster of Paris ( POP) .Will I be able to move the hand again? Will I regain my eyes again?.I looked at the doctor and broke into tears.I am finished ,I soliloquized. I looked up and saw Intravenous Fluid (IV)  hanging loosely  .Haa! , my  right leg had been ‘decorated’ with Plaster of Paris (POP), and according to the doctor ,the right leg  has fracture  and it may  be amputated. My head is ringing like a church bell .I did not know when I said ‘Kai   my  enemies had eventually captured me’. 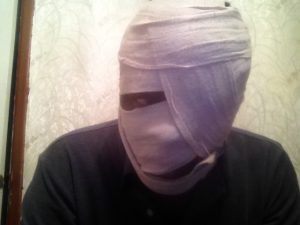 What happen? When and how did I get here?.All I could remember  was when I was in my  velvet suits and  at a gathering entertaining     my friends  who came from Texas and Chicago  to visit us   .  I  told them the   story of my Owo trip and how we ate delicious food  ; pounded yam, bush meat and egidi ;and how we all gulped it down with fresh palm wine. Then I started showering   panegyrics  on palm wine ”emu abirawarapa abito funfun lenu, Ogun Onire Oko mi, Ogun olomi nile f’eje we..” We  were dancing to the music of  Orlando Owoh’s music of Money  for hand …Ero ki yeye mi oo,E get as  E  Be …..Suddenly  a fight broke out  between two ladies .One of the ladies who was pregnant  traced her husband to the gathering , they exchanged hot words and this led to fisticuffs . The husband of the first one threw a broken bottle while the other  man drew  out  his pistol from his waist band leather  holster  .The whole place was  in  chaos. Mr. Ade brought his sword from its scabbard  while Mr. Ahmed in annoyance brought out a keg of petrol and wet the living room. Insanity took over  as everywhere became the Devil’s home! .Their eyes turned red, some were screaming , others were shouting that it was Devil’s work. A woman was seen kneeling down in a corner praying and speaking in tongue to let God take control.  Suddenly one of  the ladies  fighting  fell into labour , she was screaming as she held her waist. Before you say Jack Robinson we heard the blaring of siren from Police Cars ,  Fire service  vehicles and Ambulance .The noise of the siren buried our  noise as  the Fire fighters were trying to put out the fire as the whole building was in flame. 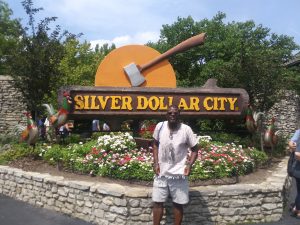 Many were arrested .It turned out to Court case. The woman who started the fracas  and    fell into labour later delivered twin babies but was fined. The man with sword was sentenced to two years imprisonment with  hard labour  while the man with gun had fled into the thin air and was never seen again.The  other man was on Watch list.

My underwear was cold  and  ‘water’ was flowing from the mattress .Then I heard my name from a  female voice calling , ”Babalawo of the Nation  , get up its time to go and  catch our flight back home, its now 11 o’clock .I  realized  this was Ronnie’s voice. I remember we came to  the tourist town called  Branson  where we  visited  Silver Dollar City ,a big amusement Park where I rode  the roller coaster and  visited   the Cave of ‘No Return’ .  I had taken some oyinbo kain kain .I now remembered that  I ate bush meat, pounded yam, cornmeal , egunsi soup, in Owo about two years ago .Then I burst into tears and started another song

When shall I see my home

When shall I see my native land