She is hilarious. No dull moment with her .Not many people know her real name as she is only known as E ku Feee. She was rescued by the late Olowo of Owo, Oba Adekola Ogunoye II when she was in trouble 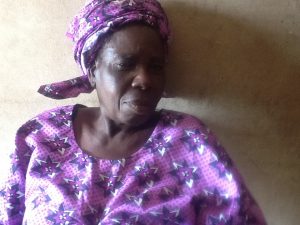 Madam Oluwafunke Samuel ( aka E ku Feee)
Looking at her she is simple, but when she opens her mouth to talk one would think she is a comedian and if care is not taken one could break his ribs as she speaks.
MY STORY
”My name is Oluwafunke Samuel. I live in Emure Uli, Owo, Ondo State . I always come to the King’s Market (Oja Oba) to sell my E ku Feee . I am in my late 60s. My story is an interesting one .I once had conflict with some market women about 30years ago when the late Oba Adekola Ogunoye II was on the throne”.
She continued ” sincerely speaking there was a rule in the market that nobody should sell powdered corn ( elekute) but due to the poverty I found myself I went ahead selling it . It was my grandmother’s business. Some years after her death I was financially down and I had nothing with me . I then decided one day to start the business , and I took her materials , set up the business and started producing and selling it.Though I lived in Emure but always go to Oja Oba ( King’s Market ) where there is market for the product ”, she said , nodding her head.

MY ARREST
However she was arrested , she said ”When the market women caught me selling the banned product they arrested me and said I flouted their rule , all my pleadings that I was trying to sustain myself felt into their deaf ears. They asked me to walk -over a local knife and that I must pay a live cock and pay some fine. I walked over the local knife but refused to pay all the fine telling them that I am a Christian and that I know Jesus and did not believe in their Tradition. My product was seized and it became a serious matter ”
OBA ADEKOLA OGUNOYE RESCUED ME
Madam E ku Fee was talking with all seriousness yet laughing. She said ”I was taken to the palace of Olowo of Owo , Oba Adekola Ogunoye II, who was a no -nonsense man . The Market leaders were all sure and certain that they would win me and get justice . I remember some high caliber of High chiefs and community royal fathers who were present including High Chief Adelanke Ajana the late Chief Priest of the town with some market leaders.
INTERROGATION
”When I was interrogated by the late Ajana and Oba Ogunoye and asked what I was selling , I said ”I am not selling powdered corn but selling E ku feee, (Aroma)”. They asked again what I was selling I kept on saying that I was not selling powdered corn but selling E ku feee, they all looked at one another . With confidence and pity I insisted that I was selling E ku feee but not powdered corn. They all burst into laughter. The Monarch then asked them to leave me alone that I was looking for what to eat .Since then they have been calling me E ku feee.That was how the late Monarch, Oba Adekola Ogunoye rescued me, and this I can never forget till my dying day.”
HAWKING
While hawking her product she said ”I would scream on top of my voice advertising my product that they should come and buy E ku feee, and they would call me to buy. I have used the proceeds from E ku feee to train my children in school in the university ,from the proceeds I have built house and still feeding from it today.
CALL ME E KU FEEE
Though E ku fee love journalism but said ” they are not well paid . I have an uncle who did it for many years but came home with nothing to show for it .Asked about her E ku feee again, she said ” when I am frying the corn its aroma wafts everywhere, when I ground the corn the aroma wafts everywhere and when I mixed it with palm oil and groundnuts its aroma wafts in the air and everybody will know its E ku feee.Asked what is her response when greeted or hailed as E ku feee, she said ”I will pray for them that A dara fun e, Aye a ye o”( It will be well with you, You will live well).
E ku feeee, E ku feeee.

2 thoughts on “‘How Oba Adekola Ogunoye saved me’”