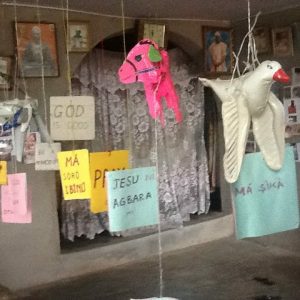 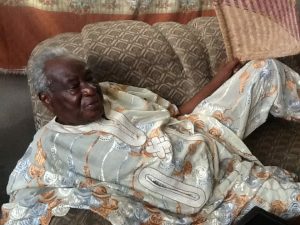 Pa   Oladejo Okediji  a Yoruba fictional writer who died some  weeks ago has since been buried. Our reporter Taiwo Abiodun went down memory lane to write on his encounter with the late Writer

It was one afternoon , an okada rider dropped me at the gate of a building    at Mabolaje Area in Oyo town. I knocked and a woman sewing clothe (who I later learnt  was Baba’s younger wife) opened the gate. As Baba  sighted me , he said ”come in ,   I have been expecting you .How are you my son? I hope it  was  not difficult for you to  locate this place?. How was your journey?”, I replied it was fine. ”Baba , your son, Professor Moyo Okediji gave me your cell phone  number’ ‘, I  said and he replied ” Yes, he called me on phone and told me you were coming for an interview , thanks”. 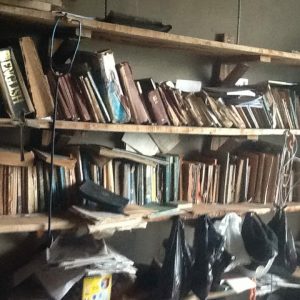 One of his bookshelves

Simple and soft spoken, loving and jovial, Baba Okediji   trusted people  and  believed in God. He  did not ask for my identification card as some would.  I have worked in the media for many years and have met  those who are not up to his caliber  and would  arrogantly demand  for one’s  identity card and even ask   whether one is a  a genuine reporter. Some would look at you with disdain then  take you to another place, or outside for interview while some with arrogance  would  show you their material wealth  and therefore would change to another expensive living room to show you how wealthy  they are but not Baba Okediji. He said ” Sit down, and let us do the interview here”, the interview was successfully conducted. 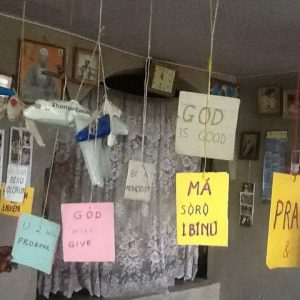 I said ” Sir , how is Lapade , Tafa Igiripa Omo Lawale?”, he laughed and asked ”Do you want to see them?” and we all laughed. I could not  imagine how a simple man could craft stories like that . I was expecting a tall and huge man. I was expecting a man with croaked voice like he described Tafa  in his books. I was expecting the spirit of Lapade, Tafa, and Sule Alayimo , but no. I was expecting his action to be like that police officer, Audu, but no,Baba was simple , he spoke  softly as  I interviewed him.

I looked at him, I was excited to see him , excited to know him and felt honoured to shake his hands.  ”So this is  the Baba  that wrote those mind-boggling , suspence  and  adventurous    crime stories?”. This  reminded  me of the late Bayo Oguntuase a Linguistic  and Columnist whom I knew in the defunct Concord Press, The Comet and The Nation newspapers correcting English  tenses . He   used to sleep ‘among’ his books. I went to his house while he was still living at Ketu, Lagos  where I found him using his room , living room as   libraries as you cannot differentiate which one was  the  library or bedroom!.

Now Baba Okediji was like the late Oguntuase ,he was  taking me round his personal room,  having confidence in me. On his bookshelves are  Yoruba and English literature , novels and Grammar books you cannot find  in any Nigerian library or bookshop.His library was rich with  books, he had books!.

When he told me that one of his children is a Professor,another a lawyer , a principal etc, I looked at him again and said ” God please give me the humility that this man possessed.  Those who didn’t have one  of these are proud and doing gra gra , making noise in public places, but not Baba Okediji!

I looked at the card boards where he wrote some Christian, philosophical, moral and soul- lifting  words that could convert  an Atheist or the Devil to Christian . I looked at him and asked whether he was a preacher and   when I remembered that he was Baba Ijo and the Baale of Apaara community , I praised him to  high heavens .

I asked ” Baba why did it take you a long time to write again for  only Agbalagba Akan, Aja Lo leru, Oga ni Bukola, Atoto Arere that are known?”, he said ” Oh I have published some other books like Ka rin ka Po which I published 30 years after  Aja lo leru , it is the third book after Aja Lo leru, and Agbalagba Akan, I have also published  Running after Riches and  they are in the market”.

”Baba you should be a millionaire by now  for your books are popular?”, I  said, Baba laughed,  blew his handwoven fan and  asked ” Taiwo or Babalawo of the Nation, are you also rich?That is the problem, Nigerian writers are not appreciated and don’t have money ”

When  asked about what he hung   in the living room he said ” when people see this they will think twice , and even when you read  and ponder over them  before you go to sleep you will repent. They are messages , there are many ways one can evangelize, all these are part of evangelizing . I don’t need to go to the street preaching”.

In my own opinion Baba was a millionaire  but chose to be  humble.  He was a millionaire but lived a modest life .How many old people were buried within three days with fanfare, honour and dignity as he was?.
Goodnight Baba.