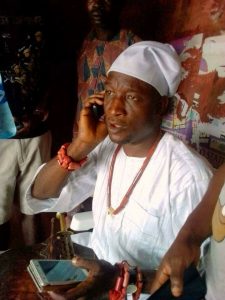 Dressed Dressed in an embroidered     immaculate white   guinea     brocade,   and  a  cap     to    match. In order to make the regalia complete   for his  status ,  he  adorned on his neck , hands and feet  with  special  royal coral beads . As he stood up  and  beckoned at his visitors to come around  him, his intimidating  stature showed he is a man of  more than six feet tall . His  dark- skin glitter. With total humility the High Chief not  minding  his height and status  bowed  and  greeted the  elders who came to felicitate with  him. To the young and the old he gives them respect and one keeps wondering  of his noble character.

He is a man of few words and well -cultured . He  speaks flawless  English  and back  it up with his  noble character  and dignified  mien. He is witty and richly  blessed with  choice of words laced with Owo proverbs, idiomatic expressions   and songs . Infact he is an encyclopaedia of the History of Elerewe and  Owo . He is humility personified. These are the reasons all the natives , His Imperial Majesty  and those who did not even get close to him love him. 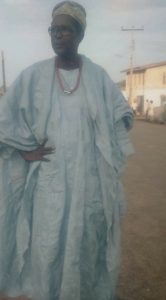 An High  Chief who does not want his name in print said :”for this man who occupies the throne of his forefathers , it is a blessing to the  Elerewe family, to Owo and  Yoruba land at large  ”.

The Olunaun of Unaun, Prince Olanrewaju Abegunde said” I am always very proud of Olowo of Owo in any decision he takes, he is a lawyer ,a traditional  ruler and a wiseacre. He is gifted with wisdom . I give him kudos for choosing a good man like Ilori who is loved by everybody. Before Kabiyesi does something he would  exercise patience and do a thorough  research very well .Above all he would pray and consult God. He is a visioner  and a prophet , whatever he says always come to pass. We all love Ilori, he is a good  listener, Ilori is a lover of  Owo people , he is very obedient and respectful”.

Another High Chief who is versatile in  the Elerewe  family history said ”Ilori’s destiny was eventually fulfilled as he assumed his ancestor’s  throne .  It  has been predicted long ago   that he would be the right man to ascend the throne before he was born. I remember it has been predicted for a long time that this boy will be on his forefather’s throne .He shied away from roughnecks, destructive criticisms and gangsterism”.

Call him Elerewe Ojo he would smile, if you like call him Elerewe  Olakunori, he will still answer you because, according to  strong  and old members of the family Ilori is gifted  with  these ancestors’  physique and he possessed multilateral combinations of  character,  talents and traces of the late Elerewes …he is peaceful and  humble, you can easily described him.

Professor emeritus, Robin Poynor, an American Professor  (who retired from the  University of Florida) who was in Owo in 1973  doing research on Owo   and knew the late Elerewe Ojo very well.  In his message to this reporter , he  wrote ”Ahh! I really liked Elerewe Ojo…. And my recent contact with Elerewe Ilori tells me that he has his father’s good traits…He is tall like his father and his grandmother ”.

To the family of Elerewe, he is the expected image builder and the bridge between the old and the young Elerewes to come and repair and put in place many things that had been destroyed and had gone wrong in the family. ” Ilori has the spirit of love, kindness and his humility is high as he respects everybody”, Babasegun said.

The Olunaun of Unaun, Prince Olanrewaju Abegunde said” I am always very proud of Olowo of Owo in any decision he takes, he is a lawyer ,a traditional  ruler and a wiseacre. He is gifted with wisdom . I give him kudos for choosing a good man like Ilori who is loved by everybody. Before Kabiyesi does something he would  exercise patience and do a through  research very well above all he would pray and consult God. He is a visioner  and a prophet , whatever he says always come to pass. We all love Ilori, he is a good  listener, Ilori is a lover of  Owo people , he is very obedient and respectful”.

Mr.   Adepoju  Peter gave a graphic description of the man ”He is the  man that can rebuild  and unite the family because of his Solomonic wisdom, sense of humour , loyalty, levelheadedness,  high quality of his social interaction, gentle-manliness, courage and integrity   he is endowed with”. 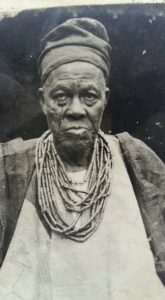 An High Chief said” Quote me , we all love this young man of peace and integrity.  Kabiyesi loves peace and the man that fears God. This Elerewe is richly endowed with wisdom, he always sat at his father’s feet and that means he has been tutored, had gone to school of Elders .If a child knows how to wash his hands he will definitely dine with the elders”

Olakoli Peter said  he did a research on the new Elerewe very well and found him to be unrivaled in character and simplicity.

The question on everybody’s mouth is whether the new Elerewe has done well, Tunde Onibode who is also the President of Tunde Onibode Foundation and Owo Ambassador of Culture  beat his chest in defence of the new Chief and declared  ” Since his installation , he has never disappointed us .His loyalty to the crown and the entire kingdom is unquestionable and he has been playing his  traditional role to the best of his ability as tradition dictates”.

The soft- spoken man is rich in history, according to Jide Tububo,  ”he is simple and peaceful.In fact he is  talented  and has the magic wand to turn things around  above all he has the fear of God in him. I remember when I met him and a  man was raining insults on him in order for him to retaliate but the High Chief did not utter a word. I respect him a lot. He is too humble , full of humility.” 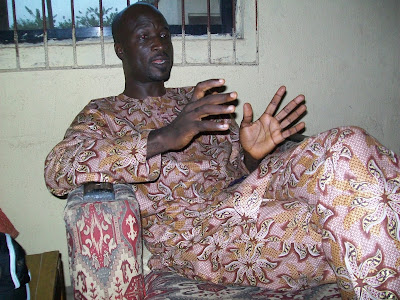 Throughout the interview with this reporter he  referred  to God several times and once told this reporter  four years ago that   ” I have no money , I have no connection but I have the Almighty God behind me .The Alpha and Omega   who knows the beginning and the end .  While I relied on God to perfect things for me”. That is the  nature and manner of the man called High Chief Ilori Tunde Elerewe who was installed as the new High Chief  two years ago.

Watch out for his  interview tomorrow