If you call it hope  and  faith you are correct.  In spite  of his old age at 73 , Pa ( Primate) Ayoola Omonigbehin  says he is still hoping in God  to be a family man. He has been living alone for the past 38 years.  taiwoabiodun.com was with him 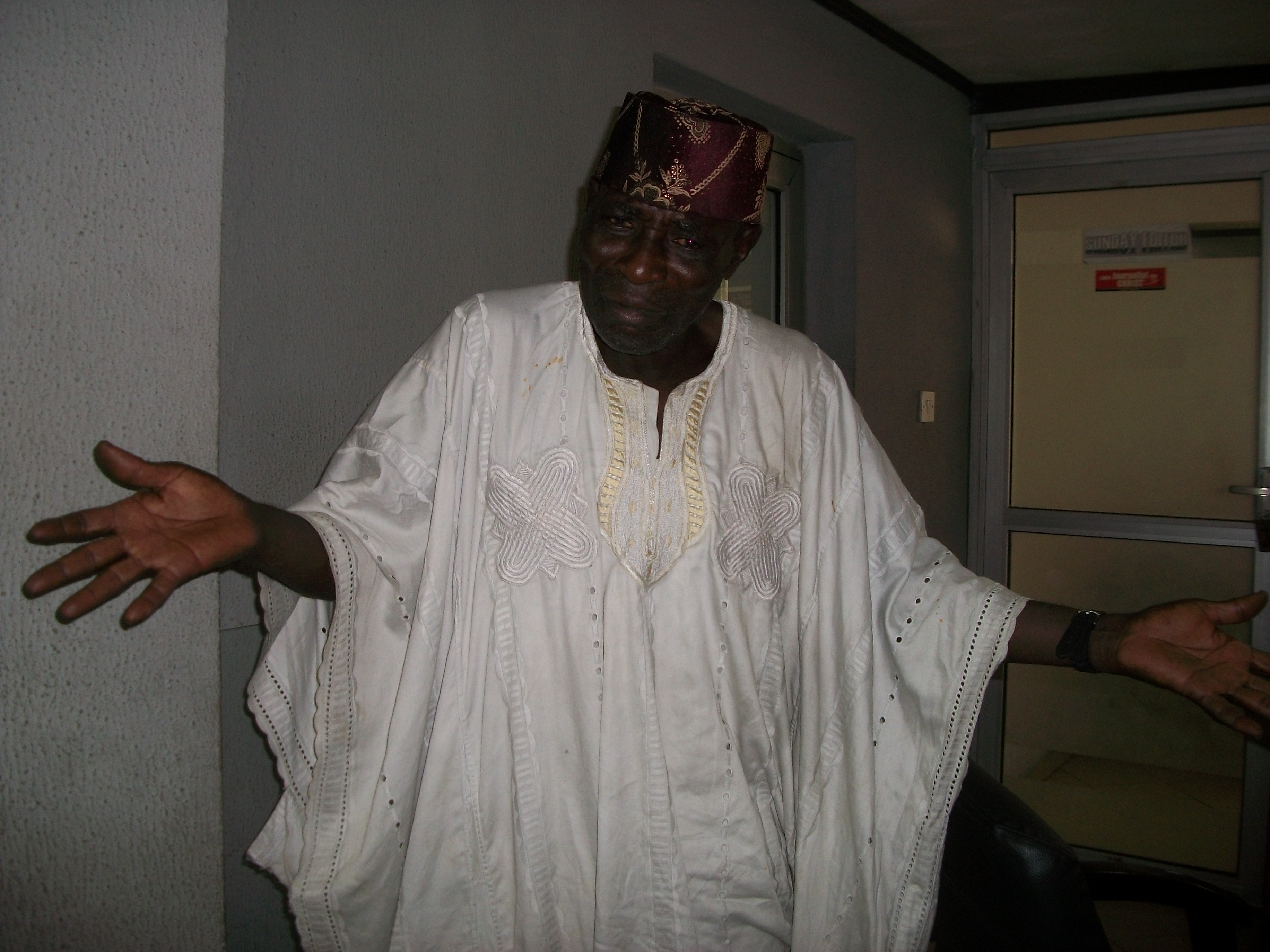 Pa Omonigbehin asking  ”what is their business?”

He is always cheerful and jovial  .The veteran journalist is always  in his Yoruba traditional  flowing gown [agbada] .He is  very  popular and known  in many Nigeria  media houses, infact  there  is no media house in Nigeria that Pa  ( Primate) Ayoola Omonigbehin   is not known for he has worked in some media houses.

The septuagenarian  worked as a reporter at the defunct Concord Press in the 80’s. According to him , he was on Business Desk and he was the brain behind   the defunct MKO Abiola Babes. He has also published a magazine which is now defunct.

A courageous missionary and a powerful  man of God  who goes about preaching  the gospel ,and calls a spade a spade.  According to him he has healed many  from their infirmities.

Asked to give an example he said ” there is a man with unsound mind who has been staying at Ladipo  Motor  Spare Parts Market, Mushin  for a long time ,  I went  there to   pray for him .Few days later I  went back there  and  I was told he has left, he has been healed” , Omonigbehin said as  he swore to high  heavens .

Evidence of his works

Armed with series of his published stories  and his newspaper cuttings ,he showed  reporters  his works ,  evidence of his works .Every  afternoon the old man   comes to  The Nation Newspaper’s  office in his flowing gown (agbada ) displaying his long handwritten stories to Editors   to be published. Although age has bent him as he  goes along with a long strand  from one office to another.There is no reporter he does not know. Infact a former Sunday Editor ( now Online Editor) confirmed it that the old man was once a senior colleague at  the defunct Concord Press Nigeria Limited, a print media owned by the late MKO Abiola.

Primate Omonigbehin who  has spent many years in Lagos confessed that  he is not a Lagosian as many thought but a native of  Ibadan , his words”I was born in the 40s and I am  from Beere area in Ibadan , Oyo State”, when asked when last he visited home , he smiled, shook his head and refused to tell taiwoabiodun.com

On how he feels when he remembers  that he lives alone and without a wife and children , he replied ‘ It is true that I have been living alone for the past 38 years , I don’t have a wife or child to be called mine but I am not hopeless .If you read the Bible you will read the story of Abraham was over 100 years before he had a child,read Genesis 14.Noah was over 600 years , and they  say  as it was in the beginning…so if you know Christ you don’t have to be afraid , what ever comes your way, it is just a matter of time. I am still hoping to have a wife and a child.”

He added that he  will have three children as he makes references to the Biblical  Abraham who has a child at  old age.

He rebuked  those speaking ill  or gossiping about him for living alone  the old man said ”what is their business about my lifestyle?Ki lo kan won nibe?”, he rhetorically asked.

On his pastoral job , he said “As a prophet of God I have prayed for  some people with infirmity and they were healed , God is my witness”, he boasted

The Primate  said he was once attacked by his neighbors who ganged up against him thus making him sleeping with one eye open for the fear  that  his life is not safe where he lives at 31,Ile -Iwe Bus stop,Ikotun.”they wanted to kill me and God has been rescuing me from the enemies”.