The 90 –year -old twins with one of their children, Alhaja

……Go to the toilet  same time

When this reporter called them on phone they were at first apprehensive especially during this time of gbomogbomo ( kidnappers) as they  felt  reluctant to answer until the children were convinced that a relation of them gave  him (reporter) the hint about the mysterious twins living with their children in Owode, Ogun State  near border.

Welcome to the world of mysterious twins whose lifestyles still baffle everybody .

They are identical in everything except their height .They go to toilet same time, get sick same time , eat from same plate , wear same dress from under wears to  head gears.

Welcome to the world of strange twins : Mariano ( Taiwo) and Hassanatu ( Kehinde). They are identical twins,their children  confessed that they hardly know who  is Taiye and who is Kehinde,  even their friends of  several  years cannot differentiate them. 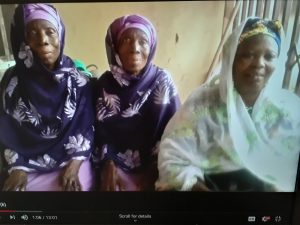 When this reporter approached them for the interview it was really amusing as they  wore same clothes and  behaved alike !

Asked about their background , the  twins ,  Taiwo and Kehinde chorused ” we didn’t go to school and have not formal education  but were into trading since our youth.We  have been doing things together since our youth. We  wear same clothes from our undies to our head gears , we have same friends and had been  doing everything together .”

”What about marriage?”,  this reporter  asked again. Surprisingly the two have everything similar , they both said ”We married same day, and our parents did Nikai for us same day and we went to our husbands’ houses same day!”

Asked whether they had same body chemistry , and doing their monthly period when young, the  twins laughed and with total confidence said ” when we were young we were doing  our mensuration same day , or either one would start a day earlier before the other and mark you up till now we wear same colour of undies”, the two chorused again.

THEY ARE STRANGE (CHILDREN TESTIFIED)

Their children testified to their strange lives , according to Alhaja Musiliat Kilani who is one of the children of the twins, ”whenever you want to give them gift , the gift must be same too, but if they are not  don’t bother to give them for they will not receive or collect them from you. When one is sick in the morning the second will fall ill in the evening”,  She gave  examples ” when Taiwo was sick in the morning and was taken to Oluwalogbon Health Centre, Ishaga -Iju, her twin sister, Kehinde  fell ill  same evening and was taken there too.The two were discharged on the following day . It is true they eat from same plate, drink from same cup, eat from same meat , that is they will cut the meat with their teeth and the second will eat the remaining half no matter the number of meat in the plate , they will cut it with their teeth” the Alhaja said .

”What would happen if they don’t do anything together?”, this reporter curiously asked but  Senior Evangelist Saliu Sanni who also refused to tell who between the two  is his biological mother said ”You don’t need to bring non identical things for them for  they will not receive them. They did everything together” . Asked to tell which one is his mother but he replied   ” the two are my mothers, I can’t describe them , they are over 100 years of age .They sleep together. They share same bed, and they don’t want anybody to separate them even their children .There is no politics in the family”.

Evangelist Sanni  went down memory lane to analyze an episode that happened 37 years ago during the twins’ pilgrimage to Mecca , he said ”when they were going for Hajj in Mecca, they caused a stir at the Murtala Mohammed Airport, Ikeja  when their names were alphabetically called and Kehinde was called to go into the aircraft first and with the alphabet order there was no way they could sit together but they  refused  and objected to the arrangement method.  Kehinde said she  must sit by her twin sister, Taiwo; after much hassles the Hajj planner/airline   bowed to their wishes. Again at the Addis Ababa Airport in Ethiopia they refused to sleep in different rooms they gave them in hotel where they were lodged as   they insisted in sleeping in the same room and on same bed. That is how they live”.

The twins , when asked what should be their prayer to be , they again chorused ”We pray our children should follow our footsteps , we have no secret and we love ourselves .We have seen our four generational children and we thank Allah”.

HOW WE WERE ROBBED

What baffled many is the way some miscreants pounced on them in the middle of the night and robbed them of their money. The twins are not happy as they claimed some robbers came to their rooms at night to rob them, Taiwo said ”it was around 3 am as we both went out to ease ourselves when we sighted two young  men who entered  our room and asked us to keep quiet .The robbers  demanded for the money in our possession, we begged them to spare our lives as we were old.They carted away  the mosque’s collection   in our possession , they also went away with huge amount of  money kept with us  .The painful one was  the daily contribution (Owo ajo) they kept with us ”.

NO , WE WERE NOT RAPED