…….I am number Two out of Seven wives 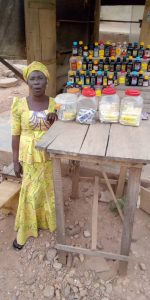 Madam Silifat Owomoyela’s home is austere .Her routines simple while her days very ordinary . She   had   dined and wined  with the  late popular   Juju High-life African Kennery  Maestro, Orlando Owoh  in her heydays. Infact she had a child for him. Silifat who  once lived in a commercial ganglion city  where there was hustling and bustling  has  now relocated  to a peaceful but less- economic buoyant town.

Now  a grandmother, she  maintains a low profile and daytime duties as she sells locally brewed  alcoholic drinks  and gins  struggling to eke a living and takes care of  the  only grandchild  her only  late child   left behind.

Yet with all these  brutal life experiences she does not allow memories of  pains and agony that traumatized her  take-over  her life as she buried her sorrow and wears smiling face all the time.

HOW I ELOPED WITH THE LATE  ORLANDO OWOMOYELA

The woman who claimed that she  was once a dancer in the  late Musician Orlando Owoh’s Band  started ”My name is Silifat Owomoyela , I am from Owo. I got married to the late Orlando  Owoh the Musician  about  52years ago. I met Orlando  in Lagos .I was born in Mushin  in Lagos”. She continued ”You see Orlando  ”stole” me  from Lagos” .She spoke in Yoruba language  ”o ji mi gbe ni o. He is Ajinigbe ( she burst into laughter ). We were together .And we both went to Ibadan , that was when Mokola Roundabout was still called Elizabeth Road.We were together in Ibadan , about  52years ago”

The woman gave a shock to  all Orlando’s fans,  she said the late Musician used to play for his late father when alive , she said ”when I met Orlando  in Lagos , he   used to entertain   my father  during the   Muslim Id El Fitri’s festival . In fact it was Orlando who stopped me from  going to school .We both  ran away from Lagos and went  to Ibadan to live.But when  I was pregnant  we parted  and that was all .     . 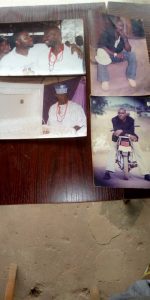 MY FATHER WAS A   WEALTHY MAN

Beating her chest and without mincing words  she boasted ”It was my late  father who  exposed Orlando to the world and made him come back to Lagos to settle  down  because he was living in Ibadan before” . Asked  the   reaction of her father when Orlando left her, she quickly responded  ”My father  did not do anything to  him when he left me”. However she spoke highly of her late  father and said her  father was popular and wealthy in his heydays ”My father was very rich then, even Emperor Pick Peter sang his praise , My father’s nickname   was  ”Is A Goal”. If a ship sinks  in the Atlantic Ocean he would find ways to clear  the goods from the ship. He was a big Merchant and   trading at Apapa Wharf then”, she told this reporter.

WHY I AM STILL SINGLE

Asked why she has not remarried since she parted with Orlando, but the woman screamed as if marriage is a taboo ,  ”Remarry? I did not remarry , and I did not marry anybody. I have chosen not to remarry .I finally parted with Orlando 40years ago”. When pressed further on the reason why they parted, she said she could not cope with a man with harem of wives , she said ” it is difficult to survive  in a polygamous family , infact it was  Mama …(names withheld) who pushed me out  of the matrimonial home”.

Asked whether she was aware of Orlando’s  habit of smoking ganja, the woman declared  ”Yes, he was smoking ganja ,  but I don’t even drink and  I didnt’ buy ganja for  him” . She described Orlando thus ” he  was a nice and popular  man but more popular as the time went by  .Fans used to pay five naira ticket fee to watch his shows, later it came to ten naira. He used to play in Mayflower- Olorunsogo ,Lagos. He also used  to  go to Ibadan  to  play   at places like  Mokola Roundabout ,Anti Rose Hotel  , and Sabo, in Ibadan” 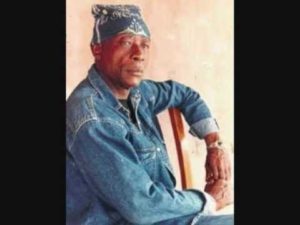 MY PARENTS RELUCTANTLY  APPROVED OUR MARRIAGE

On whether the union between her and the late Musician receive the blessing of her parents, she replied ”My mummy did not support it at initial stage  but in the end it was supported. They (my mother and the late Orlando) are  from same area in Ifon, but my paternal grandfather was from Ute , he was called Agbaminoja .My mother was  from the royal house of    Ute , but her (my mother) mother is from Ifon. My father is from Owo, and  did not support  the union , and they warned me not to go to him but  later it was approved”

I AM NUMBER TWO AMONG ORLANDO’S WIVES

The woman argued that she is number two among Orlando Owho’s seven  wives. She added that she was a dancer as she used to dance for him while on stage while dating the late Musician .In her own words she said ”I used to dance for Orlando’s band . I  was his dancer on stage in Ibadan,  he trained me . It was Orlando who  deflowered me”  .She added ” Orlando took my virginity (deflowered) . I did not know any man  before I met  him. I was at age 13 when I met him .We were together in Ibadan ,that was when he was also going out with anti Muibat, who  was older than me .It was towards the end  he married Shade. I was with Orlando at Mokola, Ibadan but anti Muibat was working at Sketch Newspaper in Ibadan. We were all in Ibadan , anti Muibat used to come to  us in Hotel in Ibadan. I was young   and innocent  then  , very young and  it was the (dis)virginity  or my first sex that I had  that  resulted to having my first and only child  (Sunday) ”. 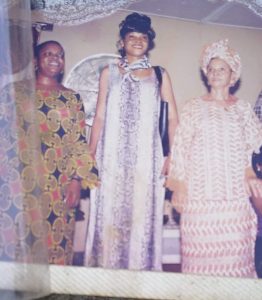 From left :Funke, Shade and Muibat

Still on the argument whether she was the second wife, she declared  ”I did not meet any wife in his house , but I met  a  male child in the house .That child  then  is in America  today and he is the one paying  for my grandchild’s school fees.”

But the woman is sad , as her voice changed , and  in a sad and low  tone said the  only child she had for Orlando and her   only  child, a son, Sunday Owomoyela  died  five years ago . She  added ”that was why they brought me  back home. My son, a soldier  died five years ago. He had a  set of  twins, but only one, Taiye  survived ,and he is with me here .If  you see Orlando’s grandchild don’t look for Orlando again,  the boy  is 10 years old , he could beat the  drum very well. His twin brother  Kehinde has died ,  he returned to where he came from”.

After spending many years in Lagos , Silifat  who should be in her mid 60s relocated to her family house  in Owo to continue her life. According to her , her family advised her to come back home after spending most of her lifetime in Lagos. The family members now set up  a small scale business for her where she is selling  hard drinks , and shots for her customers.”I am in my father’s house in Owo now”, she told this reporter.

During the time Orlando had problem on the drug saga , Silifat said she was not around then  but ran back to Lagos to sympathize with the late Musical icon,”I traveled to the North but  when I heard  the news on radio I rushed back home . I heard that he was arrested for cocaine and I knew he was not selling cocaine”.

On the death of Orlando ,she said  ”It  was Folashade  Lagundoye  who had my cell phone number that   called me to inform me that  Baba had died .We ( wives)  all observed  the widowhood rituals  together even two months after the outing   I was still there in his  house at Agege” . She spoke on her relationship with  the other Orlando’s wives and  said ” other wives  love me ,myself,  Auntie  Muibat , Funke  and Shade  are the remaining four wives Orlando  left behind ”

According to Silifat , seven women had children for the late Musician , and she is proud to say they all live peacefully , she  said ”we have never had any quarrel in our lives , we were very close , no rift among us”

SHE IS NOT ORLANDO’S WIFE, SHE  ONLY HAD A CHILD FOR ORLANDO—-Anonymous

After the last interviews with the late Orlando’s three  surviving wives viz: Caroline Muibat ( the most senior wife), Funke  (second wife)  and Folashade Lagundoye (last wife)  who are all living in their late husband’s house at Agege Lagos, a woman , Silifat  who claimed to have been the  original number two wife of Orlando’s seven wives came out to debunk the claim that  someone is number two wife and said she was number two of Orlando’s wives. Silifat  spoke with authority and boldness. She gave a graphic details of  her relationship with the late musician  dated over 50years  and said she had a child for him who was 52years old before he died five years ago.

When this reporter contacted  one of the family members of Orlando , a woman, she said  ”though Silifat  had a child for Orlando but  she was not living with Orlando, and was married   out of wedlock as the late Orlando  wedded all his wives”.

Another person, a man  who claimed to have known the late Orlando very well said Orlando was known to be a polygamist  but this woman should have been living with other wives if she was truly engaged with Orlando.But in African  Culture  the moment    a woman has a child for you she  has  become your  wife”, he added ” this woman called Silifat was one of Orlando’s dancers , and if she married Orlando out of wedlock we can say she is one of his wives” .

An old man  who is in his 80s begged for anonymity   defended Silifat and said ”one does not necessarily need to live with a husband before she is called   his wife. Remember  that Silifat once lived with Orlando  and she could have been the first wife to me but when she could not cope with  the politics in the polygamous home  she  left. Aside that she observed  all the necessary roles and rituals a wife must perform   during and after the death of Orlando . So she is number two as she said , no jupiter can change that. Is it compulsory to live with other wives in the same house?”, he queried.

The last may not have been heard about the late Kennery Musician, Orlando Owoh’s harem of wives , who knows   another woman would come out again to claim her rightful position?. Time will tell.