He was in tears and  groaning in pain as he spoke on phone ” I am in pain. I am living in hell. When I visited LASUTH on my appointment date two weeks ago the doctors sent me back home and gave me two months appointment to come back. They accused me of going to the press .Now I need help!”. 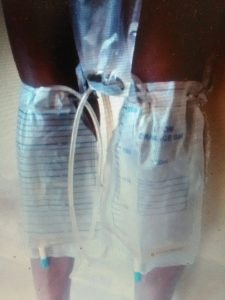 I go out  covering this with my cloth  everyday

..….LASUTH DOCTORS HAVE MERCY ON ME

……… I AM DYING , NIGERIAN LAWYERS, NGOS AND DOCTORS COME TO MY AID

For  Solomon Akinyemi  life has become difficult for him as he  has been in pain for the past five years after going through     prostatectomy ( prostate surgery). According to the 63 year- old- man and father of two ,he is asked to pay another 1.2million naira for the fourth surgery. He cried ”where will I get this money? These  doctors made mistake in the first surgery and had  corrected  it two times without success .Now I am going for the fourth    surgery in order  to correct it ”.

My names are Akinyemi Solomon , I live at 4, Julius Oladele Close, Arigbagbowo  Phase 2, ,Mowe -Ibafo, Ogun State. I had prostatectomy surgery   in Gbagada General Hospital ,Lagos on 26 April, 2016. After the surgery faeces and urine were coming out from where I was cut  , and the doctor asked me to be on admission  for good three months  while I  was  paying the medical bills .  I was  later referred to Lagos State University  Teaching Hospital (LASUTH ), Ikeja  , where colostomy was done for  me , they asked me to pay 180k and I struggled to look for money . 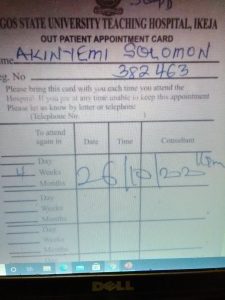 I overheard these doctors  accusing one another   for not doing the correction as early as possible . They pushed me around and were dodging me , shifting responsibility  to one another .

”In June 2017  colostomy surgery was performed on me .I stool through my side ,and catheter was  put on me. I  cannot eat when going out until I come back no matter the time for faeces  would be coming out along with urine. When going out I would wear pampers because urine and faeces could come out at the same time. I wore pampers for two years and when it got to a stage I could not afford to buy it again so if am going out I would not eat but anytime I  get home I would take little tea, and at two o’clock I would eat little till the following day, that is all  .They told me they wanted to correct the surgery”’.

”In February, 2020  this year again and I was taken to the theatre  and was operated on  but urine was coming out from my anus , it didn’t pass where it should pass. I spent another three weeks in the hospital  and was instructed not to come down from the bed. So I was in the bed for three weeks .I was discharged again but before I got there the  hospital had closed due to COVID 19.  They said they would send a text to me, and promised   they would correct the surgery again ”.

WAITING FOR THE FOURTH SURGERY

Akinyemi said “I had an  appointment  for another surgery on the 26th of October  and I was  asked  bring over one million naira  to do it. .When I got to the hospital  two weeks ago the doctors were avoiding me like plague. They accused me of going to the press to expose them, and in annoyance without mercy gave me another three months of appointment!”

”There was a time   I overheard these doctors  blaming one another   for not doing the correction as early as possible , they pushed me around and were dodging me , shifting responsibilities on  one another .

”The catheter has been in my body   since 2015 when it was passed into my body .The doctor who operated on me in Gbagada was said to have traveled out

Solomon said he hardly sleep, and had not been comfortable for the past five years. His words “I  can’t sleep ,I only sleep for  one or two hours , the rest hours would be pains , and pains .I would sleep for one or two hours then wake up listening to the radio by force because of the pain. I have vowed not to commit suicide for God will blame me. The sight of my openings are gory for me to see not to talk of others seeing it. My wife is a school teacher ,and her salary  is nothing to write home about as she teaches in a private school”.

He displayed the hospital cards .” I have all the hospital cards. I am bringing the cards for they could deny seeing me. When I get there in the morning I would leave by 6:30 pm , it’s not that they are going to give me drug. I have been taught how to treat the wound and  I  am treating it at home ..”.

” My name is Adenike Akinyemi  I am the wife of Solomon .We were first advised not to go to government hospital because of some instances like this which were either not reported or underreported  but believing we have experts and experienced doctors we opted for the government hospital aside that we  cannot afford the bills of  private hospital for the surgery as and  for fear of quacks and believing that Government hospital has the equipment and medical experts in the area made us go to Gbagada General Hospital for the prostate surgery. Imagine the fatal error , after the operation he spent three weeks in the hospital where the doctor tried to correct the surgery, and we still paid!. This man does not sleep at night, he cannot do any work not to talk of the excruciating pains he goes through everyday since 2015. I am begging the Lagos State government and the LASUTH  management to come to our aid .We have no money again .We have exhausted our savings. We have sold our landed property in Lagos cheaply n order to use it for his surgery But see what happened now. .Our children are not working .

DAUGHTER  CRIES OUT TOO

Miss  Olayinka Solomon  who is the daughter of the  man said ” it is disheartening to see my father crying everyday like a baby at night . He cannot eat or drink water like any other human being. It is almost five years  he has been on this, his prostate is not cancerous according to the doctor’s report but see what they have done to my father, from surgery to complication .I  am pleading to the LASUTH to call experts in surgery ,good surgeons and correct this error .Yes , I know doctors bury their mistake but this one is not yet buried , so therefore they should correct the mistake .We have no money to pay, the LASUTH should find solution to it .We are not suing  anybody but please we don’t have over one million naira to correct the surgery again” She pleaded to the Lagos State government and Commissioner for Health to wade into this matter. She said ” I am not accusing anybody ,We are not saying they did this or did that but here is a human being groaning in pains everyday. Have a look at the gory pictures when he is not dead .I am jobless and my sister is a Youth Corps Member. Please help us . We are poor and we cannot afford the bill LASUTH asked us to pay again .

Mrs. Duni Akinwale who is a sister to the patient said ” we have borrowed and borrowed money . Does it mean the poor has to suffer  and pay for  the negligence of the doctors?. Is this how he would be abandoned by these doctors who caused damage on him?”.