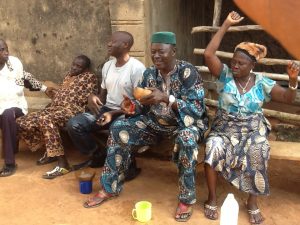 ( Epileptic man  that foams  from the  mouth. When he  arrives in the morning he remains gentle but in the night he threatens his wife saying  ‘Go if you want to !’. The next day he   begs his wife for forgiveness]

As the commercial bus  drove past , the palm -wine trees on both sides of the road  were the cynosure of all while the aroma of  the palm- wine wafted in the air. As the vehicle was running fast the trees too were running backward while  the scent increased.Funny!. 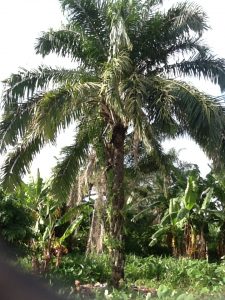 Some of these palm-wine  trees are tall while  some are of average heights  of different shapes while  their palm-fronds with their green leaves showed how healthy  the trees are  in  the   environment.  The  fresh breeze coming from the areas was felt as the sound of the ‘slapping’ of the leaves could be heard- no thanks to the evening breeze. From afar off  one could see different sizes of gourds attached on the palm-wine trees. 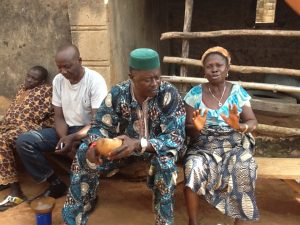 Prince Oladosun, Halimat and others

A man   unconsciously  cried out  ” Je nlo de’mu mi , agbe mi yio ti kun” [Let me go and ‘offload’ my palm wine, my gourds would have been filled up] , while everybody  in the  commercial bus burst into laughter.

Another passenger responded ” I have left  Lagos   where we  drink ‘chemical’, and I am going back home to drink fresh palm -wine”, he added ”I take two kegs of palm- wine to Ibadan to sell every week end”.

Other  passengers debated on   the advantages of palm -wine over alcohol. In  a jiffy,  the topic of  the local wine  turned many  passengers to overnight ‘Medical doctors’, ‘Nutritionists’, Chemists’ ‘Pastors’ and ‘Counselors’ as each brought his own views on the wine while the argument almost resulted to exchange of hot words and fisticuffs.

While the argument continued the vehicle  arrived its destination ,  Ila Orangun town.

PALM -WINE IS OUR BUSINESS

Four elderly men coming back  from the farm with  their gourds foaming from their mouths were sighted  . This reporter approached one of them for interview   who was jovial and turned the interview to a comedy , as he went  into action, singing ” Ila ko n’ise meji, emu n’ise won” [Ila has no other business but palm- wine tapping].

Another one boasted ” Have  you tasted it? .Have you drank our wine?. Have you been to  our  forest to see our gold?. You will marvel  seeing how Ila Orangun town is  blessed with precious ‘gold’ . We  are  the biggest supplier of  palm- wine  in the South -West of  Nigeria, if you are in  doubt then go and ask”.

One  Nosiru Shiitu  who lives  in the town stated ”Our wine  is different  from the chemicals you people take  in Lagos .Our wine  is fresh , undiluted  and medicinal. It cures malaria fever, we mix  it with other herbs and roots and use it for one thing or the other”, he boasted.

It was a Friday  around 6pm , the sun had gone down and everywhere was bubbling as  civil servants  had returned home, farmers and artisans too had retired  home and  all went out to cool down with drinks. Some were in the Beer Parlor sipping their beer with pepper soup and bush meat while others in Palm- wine joints cooling off.

Different types of cars, motorcycles and bicycles were packed  on the streets while long benches, wooden  and iron chairs were used as seats in Palm -wine joints. Some however  sat on  concrete cement    as the sight of gourds, plastic kegs and cups with calabash cups (aha) were offered. Customers were served , those who were anxious to drink served themselves and told the woman how many they had taken.Here, the literates and illiterates discussed all manners of topics from social to politics.They threw banters not minding their status, religion, or sex.

Stories of all kinds were told, two hunters spoke about their adventures, one narrated  how he met a Fairy (Iwin) while another old man described   how he killed a tiger  with his dane gun. An old man who had fewer teeth in his mouth   caught attention of everybody as he narrated how fought in  Germany. He described Adolf Hitler’s bunker, and threw  everybody  into suspense . The old  man gave the graphic  details of  the German war   and when he was   highly ‘ charged’  he    started   gesticulating and  punching   the air with his  fists as he was   expressing his  views to  drive  home his  points .

In another scene  some young men   were  dancing to  the African Kennery, Orlando Owoh’s music  blaring from the giant hifi speakers  placed in strategic positions. Palm -wine is  what  brought   them  together!. 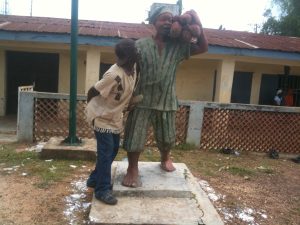 BoN   posed with a statue in Ila Orangun

The ancient town ,Ila Orangun is popular not because  of the political gladiators they have  or because of the politics they practice but it is popular and well known as the only  town in the South  west that  has the highest number of  palm wine trees and  also trade in the palm wine business .
Virtually almost  all households   in Ila Orangun sell palm- wine and it is said that the best palm wine   is from the ancient town.
One of the prominent sons of the town, Prince Olusegun Idowu Oladosun said  “This town generates 80per cent of her earnings from  the proceeds  of palm wine.There is hardly any household that do not trade in palm-wine  from natives to  non -natives. My forefathers were palm wine tappers. From my   great grand mother down to my mother were  also palm -wine sellers.We  brew  palm -wine, it is our own industry and our great source  of income”.
A palm -wine seller, Halimat  Olawole  who  is in her 70s, said “I inherited  this business from my parents . They were both  palm wine tappers and  sellers. Our own palm wine is the best in the country, we don’t mix  our palm wine with chemical. My forefathers were palm wine tappers. When they   traveled and settled down  in other places like Ile -Ife  they were  doing the same business till they died”, she continued ” my father’s  name was Gbadamosi ,  my father had no  other job than  tapping palm wine. And his wives had no other job than selling palm wine” .
Prince  Oladosun described  the town that it  has no other medicine than palm wine ( Ila k’o l’ooogun , emu l’ogun Ila), he said ” the only job we have here is palm wine tapping from time immemorial and  we are  also into farming”.
Apart from being our business  , palm- wine  cures all ailments Suleiman Oluwarotimi said , raising his voice .He said ” any child  that is sick and given this palm wine must be healed if  he did  not  recover then  we believe the baby  is a bastard.”
For Aremu Joseph   who is non native (from Ekiti) but had worked and retired in  Ila Orangun have this to say ” this is how we drink it here , I am from Ekiti state. I am happy to have been caught here  drinking it, palm wine is good  for your health  but one should not abuse it and then  drink to stupor” , he cautioned .

Another non indigene , Bamidele Adeagbo  said “I am from Idanre in Ondo State .My father was a palm wine tapper  , my father once told me a story that the keg Ila people  has is called their hernia and this used to annoy them . I  fought over   over it  several times  until  we later knew it was just a joke, but an  expensive one”.

As they were happily drinking , a man reminded others  not to leave the keg standing upright as Ogun could appear to them, he then narrated how Ogun in annoyance beheaded some palm-wine drinkers when he met the gourd standing as if it was filled with palm wine, and when he met it empty he beheaded all of them and since then it has been the practice to be placing empty gourds lying down instead of standing or sitting .

A lady who was seen assisting her mother serving palm wine Silifatu Azeez, said “I am assisting my mother to sell palm wine  and I  am understudying it  in order to continue the business when she is old .The business runs in the family”. While the mother interjected ” Any job you are doing and cannot leave it   for your children to continue  is questionable”.

PALM -WINE’s TABOOs
But  are there   taboos for Palm -wine tappers?  . Yes , there are , two old men chorused. Among the most important taboos is   “Thou shall not taste a pint  of   palm wine  before climbing the palm wine tree, whoever does this will be blind! “. However  this was punctured by an elderly man who said ” it is not good for a palm wine  tapper to get drunk before climbing the palm tree!”, he explained further, ”You  see we have seen a lot of people in the past who got drunk and when they got up there jumped down from the tree top not knowing again the high level they were”.

Another man said ” You must not  smoke cigarette while tapping” , Why? ”he could miss his way while looking for matches!”. All these taboos are for safety reasons, according to the men who said they adhere strictly to these taboos.

Chief Yusuf Olaboye described the Ila Orangun as a rich cultural place where songs are rendered  for  palm wine , with his melodious voice he sang in praise of the palm wine :
Ope wewe lemu re ndun, Mo ba’La roko. Ila a muludun,
Mo ba Ila roko oo     (The wine from the little palm tree  tastes fine , I will go to the farm with Ila people . Ila makes the town to be merry , I will go to the farm with the Ila people ),
Ila Ko n’ise meji Emu n’ise won( Ila has no other business than palm wine business).

Yes, this is Ila Orangun the home of Palm -wine, the place of    epileptic ‘victim’ foaming from  the mouth.(‘Akiwarapa  abito fun fun lenu’)

Ila Orangun is respected for their crown  which they said its original and not controversial , since it is believed that he ( Ila Orangun) is a direct son and crowned Oduduwa son, no wonder they sing
Ila l’ade wa, nwon o w’Ade ka ( Ila is  where  the crown is , they don’t need to search for  crown elsewhere ).

( The epileptic man that  foams from  mouth. When he  arrives in the morning he remains gentle but in the night he threatens his wife ‘ Go if you want to !’.  He begs his wife for forgiveness the next day)