Today , 10-07-2020 marks the posthumous birthday of the legend,Dr. Hubert Ogunde.  Taiwo Abiodun  writes about his museum 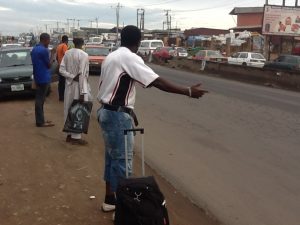 ON MY WAY TO OSOSA TOWN

At exactly 7 a.m  I  stood   along  Owo/Benin express road  waiting for  a cheap transport fare  or free ride  to Ososa  along Benin -Lagos  express road. Since there was no enough money with me to travel  so  I had to go for Soole ( illegal  and unregistered vehicles). I waited for  about six   hours   while the Sun  beat a hell out of me, for I was  no longer  receiving the   Vitamin D  from the scorching sun that reared its ugly head .I was anxious to travel to Ososa  until   a commercial Bus  coming from Abuja stopped and the driver beckoned on me  . I told the driver that I was going to Ososa , we negotiated and I was allowed  in.

When we arrived   Ore/Lagos express road   I asked one of the passengers ”Where is Ososa Village, how and what time  would I get  there today?” A passenger   yelled from the back seat  ”Please Mr. Man don’t call our town a Village.Where are you from? .Who the hell are you?.You must be  very ,very stupid . Idiot .Who are you and what business do you have there?”, he rained insults on me  . I responded ” Come Mr. Man I am from Owo , my town is popular , even it is in the Bible, it is  called the land of Honour , what do you mean?”. Another  passenger behind interjected ” Come if  the name of your town is in  the Bible  mine  is also in the Bible, we are Jebusites , for we are from Ijebu and Ijebu is in the Bible”. I thought of what to say again and I replied  ” mine is a combination of the two, I am from  Ijebu -Owo , they all burst into laughter . I won the debate.

I quickly turned the ugly scene into a joke . Although the  passengers felt offended for calling Ososa a village. I slept off . Suddenly I woke  up as one of the passengers tapped me  and told me   I had reached my destination. Lo and behold  I saw the big artwork of the man I  was looking for his Museum and  I screamed ” that is where I am going ”Hubert Ogunde’s Museum”. The passenger who insulted me earlier on  said ”There you are ,  I am going towards that place too ”.

We both alighted from the Bus and waited for okada .I opened the floor for discussion .Now I could now see how hefty he was.His teeth were  brown , his eyes were red and his voice   cracked as he spoke with me.I thanked my God that I did not fight him for he could have beaten a hell out of me. 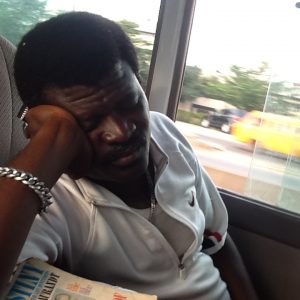 During our discussion I told him I remembered that Ogunde  used to come to Owo in the 60s to 70s to stage plays.I told him how I fell in love with Culture and Tradition  .I spoke about how  esoteric  Ogunde was . I told him about his films that were never seen in  home videos , how he waged war on  the Witches in  his film like Jaiyesimi, his films and   Yoruba plays like Yoruba Ronu, Aiye,Jaiyesimi, his  plays like Towards Liberty, Nigeria, Mama Eko, Kehin Sokun,  Beggar’s Love Orisa Nla and many more.We became friends . He asked the media  I worked for and pitied the condition of  service of most Journalists and how they are badly treated.  He asked me to give him some money to buy a bottle of beer , I quickly gave him since I   needed his services and I was taking pictures of the giant artwork of the legend. I then started singing one of his  songs:

If you are driving towards Lagos /Benin express road you will see the giant artwork or painting of of the late Hubert Ogunde. Again if you are driving towards Benin /Lagos you will see another one facing your direction. The name Ogunde is synonymous with Ososa. He made the ancient town popular and known all over the world .Today is his posthumous birthday as the legend clocks 103. 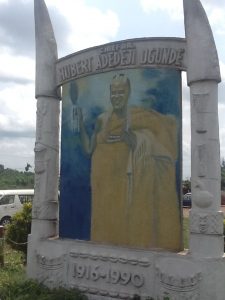 Today marks his 103 posthumous birthday.Born on July 10, 1916 to the families of Jeremiah Deinbo and Eunice Owotunsan Ogunde.Ogunde died on April 4, 1990 in London. 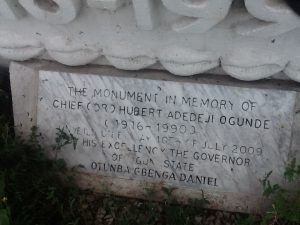 When I saw the artwork  of Ogunde I was excited and I went to take his pictures and also mimicked him by folding my arms,  smiled  as he did but some things were missing – I  had no beads on my neck and wrists, I had no fly whisk with me and I had no loincloth wrapped  round my waist,above all  I have no gap tooth. I wish the great man were around I would have had an interview with him. 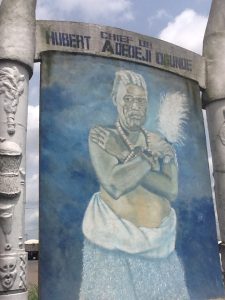 Immediately I saw a commercial okada rider , I stopped him and left for the Museum. 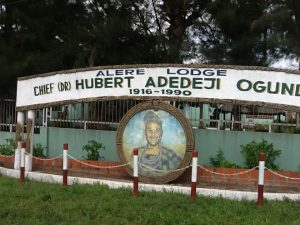 The museum is on acres of land . It  is unique and master piece.It is the richest private  museum a man single handedly established.It has over 20,000 materials ,  infact the worth in value is unquantifiable  . Students, professors and researchers of Yoruba Culture,Arts and Historians must make it a duty to visit the place. Those who have not been here should make it compulsory to visit the beautiful and where one can see what it takes to be a good Yoruba artiste .

In his compound is Ogunde’s  giant human – size statue beating his drum depicting what he was doing while alive .Where this giant statue is erected is where the doyen of Yoruba theater man was buried. The compound is full of  sculptors, carvings and artworks in remembrance of his works .This is the house of the late Hubert Adedeji Ogunde lived and used as Film Village .For his contribution to the Nigeria theater he was  honored after his demise some years ago and was among the 100 Nigerians who positively contributed to this country .Today, the children of the late Ogunde  have converted  the house into a tourist  center by turning it into a museum where people have  been coming from all over the world to have a look of his works. 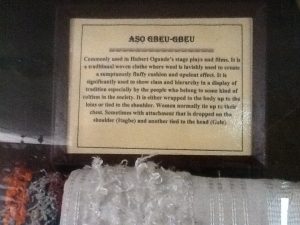 According to one of his children , Bayo Ogunde who was once interviewed by this reporter, many people have been coming to the museum to have a look at their father’s works.
Bayo during an interview with him said his father though was acting plays that are esoteric and mysterious but was not fetish and did not belong to any secret society . He said ”He was only acting mysterious stage plays  but  he was not fetish, and all was a stagecraft , my father was a dramatist, he captured what was going on in the society especially village ,the  good and bad . He knew all the Ifa incantations because his grandfather was a powerful Ifa priest and   he got it from  grandfather who was the head of oracle in Ijebuland”.

Bayo added ”All was just an act .He only used modern technology  , he got all his crew from England .He had a studio there and he used celluloid then, while everyone in Nigeria was using 16mm but he was using 35mm
Contrary to many people’s belief  that the legend could be a member of secret societies but Bayo  denied it and said ”he was never a member of Ogboni, he participated in Rosicruscian , Graile Message”. He added  ”We had a church in our compound , my father  was a member of Cherubim and   Seraphim. He was a devoted Christian ”. 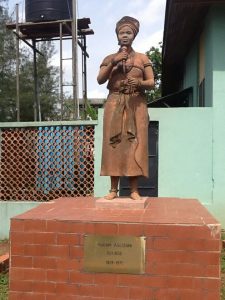 He described Ogunde’s days as tough as he criticized  the Colonialists. He said” In the early days he was jailed in the early 40s with Herbert Macaulay while he was agitating for freedom for Nigerians , and was  speaking out against the colonial masters then , the colonial masters were using the public as their nest, the colonialists  were not happy when my father said they should be paying more to the Nigerians .He did a  stage plays  and were called Bread and Bullet, strike and hunger and Tiger Empire , for they were paying them a penny.He was jailed because  they said he was instigating Nigerians against the colonialists. 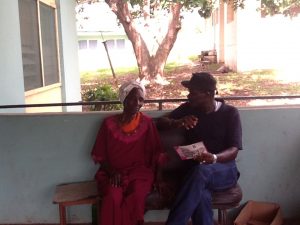 Mama Ibidun who was among the living wives of Ogunde was able to say little due to her old age.This reporter met her some years ago and she  said ”I remember we used to act with Ogunde in those days.Then there were real stories,as we do research. Ogunde was a great man, he was a wonderful husband and great”, Mama was full of praise for her late husband 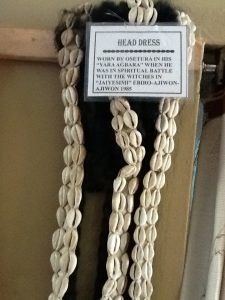 Bayo said ”All the items in  the museum  are what that he made .Do you also know that he was also a musician? He waxed many records , the fact is that everybody knew him as a dramatist not many knew he was a musician,he recorded more than 96songs .The small vinyl , and songs , and we are putting all his costumes , the items he used , we are putting them them there for the world to see” 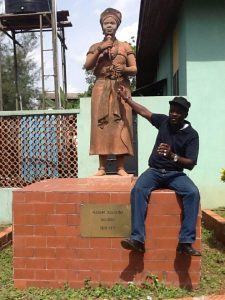 In the compound is a giant statue with names and dates, one of them is the statue of one of Ogunde’s wives who died in early 70s in an auto crash.She was going to a location, according to reports  when she was involved in an accident.

When this reporter saw the statue, he burst into tears, remembering the song Ogunde recorded in her honour; 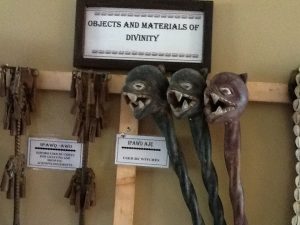 On his wives, Bayo said ”He had many , and I can count four  that are still living  , Alaba Jr, Ibidun, Ayepupa, Oludayo, Aira, Oludayo wives
About his Children , Bayo said ” he had 24 children ,most of us acted in his plays but now we are all involved in different business , some are in theatre arts”, but Bayo has this to say ” but dad left his shoes as he was , none of us or Nigerian artistes  can wear his shoe” 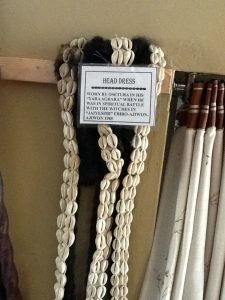 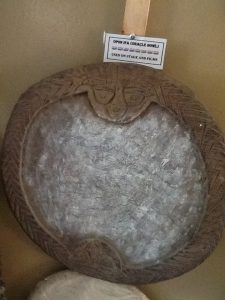 ”Adesewa  was not buried here  , we have  it there  because she died early.She was 40 years old  , we never expected it , she died young , there is also Owotunsan our father’s mother whose sculptor is there too.

Idowu Ogunde who is the custodian of museum said ”I am always here to attend to visitors.We have a lot of stories here .My father was a legend.I was young when 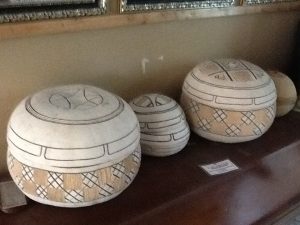 Seeing my father’s statute I feel great. He was honest If you see a hard working man you feel great .He said to me ‘do what you want to do without expecting’.
When he waxed Yoruba Ronu , he was called to play for the opposition party and Fanikayode and Akintola , but he went ahead to stage a play on how Awolowo was betrayed , in the hall they started going out one after the other .The second day these people came with a box of money but he rejected the money and did not dance to their tune” 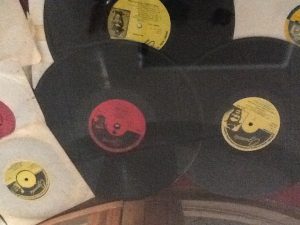 If Ogunde were around today , he would have waxed records to correct the ills in the country especially among the Yoruba leaders. 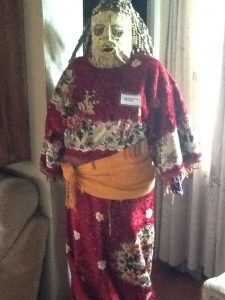 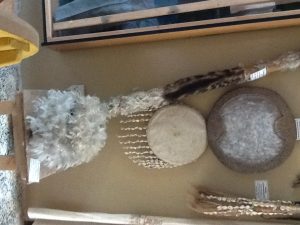 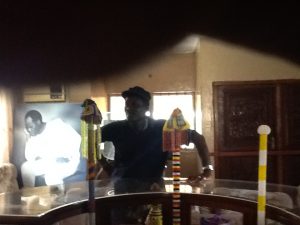 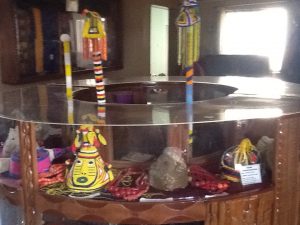 Taiwo Abiodun posed with the royal staff and beaded crowns

How are the present stage plays today? , Bayo was asked and he responded ”It’s nothing to compare with .There is nothing left now.Nobody does any rehearsal or stage plays or research , nobody does that right now .So I can’t compare them , they are incomparable”
This reporter then asked him ”Who was Hubert Ogunde ?”, hear his response ” He was a great man. Like he used to say he was God -sent . He acted his part very well and left”, Bayo said

When I was going back home to Owo  and the driver was  on high speed as he was on 130 kilometres per hour  and I played Ogunde’s track for him:

I wept  seeing the statue of Adesewa