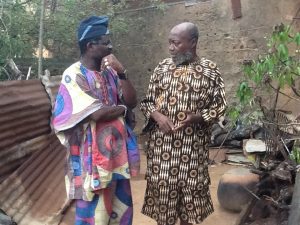 …….Politicians should swear with god of iron

…….As a Councilor  I didn’t steal money

………Why they call me The Boy

In Oshogbo , Osun State, he is one of the most popular Community leaders .He is loved, feared and respected because of his faithfulness, truthfulness, humility and sincerity .To liars and dishonest people the  Community leader is not loved after all the Yoruba proverb says Olooto eniyan ko n’leni. He is fearless, blunt and speaks the truth , according to him, Esu Deity  does not love a liar and unfaithful person. He care less  about  worldly materials .He assists the needy and in his own way a Philanthropist .That is the life of a six footer  Pa Omokayode Idowu Esuleke  .Esuleke who worships Esu in Oshogbo. He is the Baale of Esu . He professes Esu as his religion. He worships Esu as a god  .His mien and his manners continually expresses    him as an important personage.

Esuleke lives in a  bungalow with his family. On his table are various  books he has published . In some corners of  his house are oil lamps burning , and these lamps  must not quench!.

Going round the the compound is a botanical garden where he planted  shrubs, herbs and roots meant for his profession . There are some    clay pots  on fire where he  produces some of his traditional medicine because he heals as a Traditional doctor .

As he was strolling around on that day  with this reporter the  shouts of The Boy! The Boy!! rent the air, as both the young and the old greeted him. In response, the  highly respected septuagenarian  responded by waving  back. In Oshogbo Community he is loved, respected and honored.  He is   versatile in his field and     the academic  community  had  honoured  him  with the titles of Professor and Doctor. He is and loved by his community. He is  popular and humble .He is kind and a man with large heart. He does not  believe  in lying  or deceit no wonder he is feared by unscrupulous  and people with shady character and loved by honest and sincere people. That is the man, the Baale of Esu in Oshogbo, Pa Omokayode Idowu Esuleke who is the Baale Esu Agbojeniyi of Oshogbo land. He  is the head of all Esu and Egungun worshippers , and   Chairman Board of Traditional Council in Oshogbo. He is well respected and revered .   While everybody was swearing an oath with Holy Bible and Koran Esuleke who was to be sworn in as a Councillor sworn with Ogun , the Yoruba god of Iron . 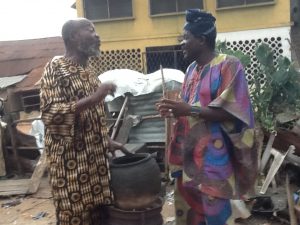 Pa Esuleke said his father  had 23 wives while his mother was the last wife , however Esuleke whose mother was the last wife (23rd) emerged to be the first and only surviving child of the large family.
Esuleke said  his parents were traditional  worshipers , he said ” my father was  powerful  physically and spiritually .He too was the Baale Esuleke , he worshiped Esu . He  married 23 wives and my mother was the last wife. While I am the first and only  surviving child .My late father was so powerful that if  he sent  any of his wives  on errands to fetch water and the woman  felt reluctant  she would have a miscarriage .Or when my father was   angry and only say  ‘Ha! me?’ to any of his wives the woman would suffer miscarriage. But when my mother conceived , a powerful Juju man was consulted and he revealed to them who and the manner of human being I would be. The man asked  my  parents to  give me the name , Esuleke .I inherited the worshiping Esu from my father , he was the (Spiritual head)  Baale Esu , and  Esu worshiper”.

DRAMA AT THE SWEARING -IN CEREMONY

Some years back , the old man , Esuleke caused a stir ; when he was to be sworn- in as a Counsellor  in Oshogbo, while other political officers – to – be demanded for the Holy Bible and Holy Koran to swear an oath with but Mr. Omokayode Idowu Esuleke’s case  was different as he shocked everybody when he demanded for cutlass which symbolizes Ogun , the Yoruba god of iron , this was at the swearing -in ceremony of  public officers  when he was among the Councilors  to be sworn -in , in Oshogbo , Osun State few years back .Esuleke rejected the  Holy Bible and  Holy Koran when he was asked to pick , he then opted for  a cutlass .He told this reporter  ” I believe in the Yoruba gods that are effective unlike Holy Books that are slow to react , punish or easily forgive  so  when we were asked to swear an oath I demanded for Ogun the Yoruba  god of Iron , and I was given a cutlass to swear with to the amazement of others .Throughout my tenure in the Council in Oshogbo I  did not steal a kobo while my action forced others to be  loyal, and money was not missed or  reportedly got lost .The record is there  , you can ask”, these were the words of a Septuagenarian who also bears a fearful name , Esuleke ( from Esu) as he said he worships Esu and he is the Baale Esu in Oshogbo.

WHY I AM CALLED ‘THE BOY’
For Esuleke ,his hair had covered his facial marks which could not let him be easily recognized .Esuleke is popular   among his colleagues and among the youths In Oshogbo , he is known and called ‘ The Boy’, but in real sense of it he is a grandfather but  because he plays with everybody thus  his humility earns him the nickname ‘ The Boy‘, he is a man of the people and  like a drama  as he goes about one could see young men and women greeting him and calling him ‘ The Boy’ which did not annoy him but instead thrills him as he would wave his hands  in response .Asked why he called himself ‘The Boy’, Esuleke  said he does not believe he is old , ” whoever claims to be an old man will not enjoy the support of the people, and whoever is looking for his mate should go to the cemetery”, he stated with a laughter .

WORSHIPING  ESU
In his bungalow which is made of mud-bricks are burning oil lamps that will never quench as the flames go up in all the corners and rooms , he said , pointing ” This is one of the Shrines of Esu , we also have that of Masquerade .While we have other pots where we prepare our herbs too. My compound is full”, he said as he was showing this reporter his  Botanical garden .