Two teachers: Mrs.Aladeniyi  Folashade, Mr.Femi and a parent , Mr. Ordu Ogbonnaya are presently remanded in prison when they could not perfect their bail yesterday .The three were arrested  for fighting.Investigation reports that Ogbonnaya went to lodge a complaint about his son’s school’s uniform which led to fracas at Ogo Oluwa Group of Schools, Uso , Akure -Benin Road .

According to investigation , Mrs Aladeniyi  who is a classroom teacher warned  a pupil Samuel Ogbonnaya to stop wearing the old uniform to school and when the boy got home he told his  father.The father, Ogbonnaya Ordu then went to school to report , and  it later turned into physical combat , in the process blood flowed. The school authority then  invited  the police and the case was reported at Uso Police Station .

When our reporter got to  the house of Folashade  at New Church , Fajuyi street Owo she was in bed and she said she had just been discharged from the hospital.

Again, our reporter  visited the school premises in Uso where the teachers work and met Femi and the School Bursar who gave the graphic  details of the story.

Ogbonnaya was met at home with his two children and his wife , he too explained his own side of the story.

The Police confirmed the story and said the three will  be charged to court. 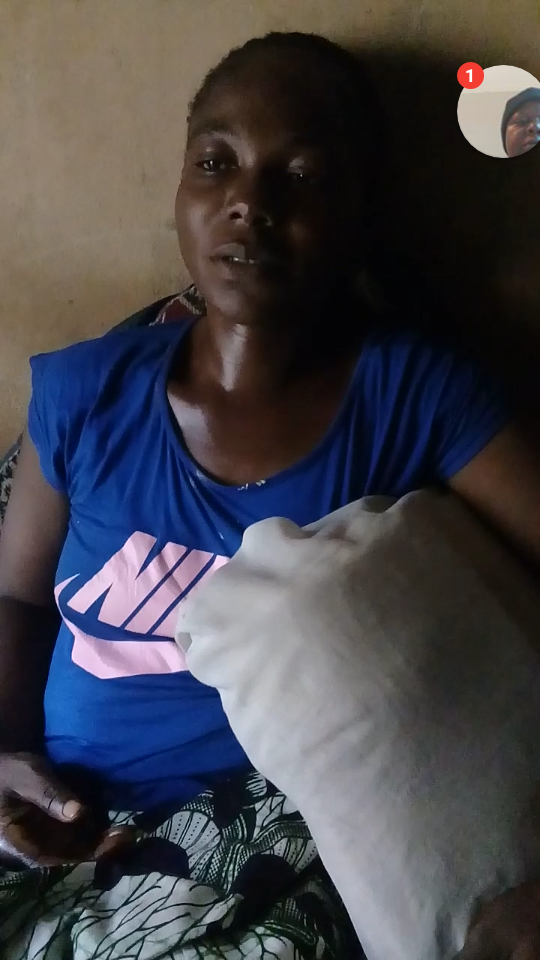 ”I was in the class on Tuesday  when  I  saw  a man in front of my class ,  he called me to come outside and I too asked him  to come in, he then asked  me whether I am Mummy Korede, he asked ‘’why are you threatening my soon’’, I asked ” how ?”,  he then   dragged me outside the school compound  and tore my clothes ,he  beat me with his elbow while the school  children were shouting ”‘Daddy Samuel  had killed our auntie ,that was how a teacher came from the secondary school section to rescue me for in our Nursery and Primary school we are all women working there .The  man  held  the teacher’s clothe and gave him head butt, he    wounded him. We called the police ,reported the case at the police station and the   DPO took me to his  office where I fainted , later I was rushed  to the hospital  and then to  General hospital .They have just discharged me from the school”.

”After leaving my class I was called by one of our staff in Primary section  and I was told a man came to  attack one of our staff here , on getting there I saw the man who was very furious   , very furious in manner and in  anger . I saw the kind of beating he gave the woman , and I tried top stop him , but he he was trying to fight him back, trying to  forge his way …I said how can he come to the school and fight one of our staff ,  as I grabbed him he also grabbed me back ..I said you cannot beat this woman its not possible, I held him so that the police would meet him here  ,  along the line   when he knew he could not go  , he then knocked my mouth .

And he started spitting the blood on his shirt .It was a stain of blood where I was being knocked by the man , he is Mr.Ogbonaya,  he has two children in that primary section. Immediately they took us to the police station

School Bursar narrates her own side of the story

My name is Mrs .  Olorunfemi Mopelola, I am the school’s Bursar. I was in school on Tuesday and while   in the office   one of the pupils ran to me and  shouted ’’ mummy, mummy Daddy Samuel has killed our anuntie o ‘’o  and I rushed to the class and met   the man beating the woman [ Mistress]  Mrs Aladeniyi  Folasade .We took her to the police station the woman, Mrs.Aladeniyi  now  fainted then we took her to the Health Centre later to General hospital, Owo where she was admitted . 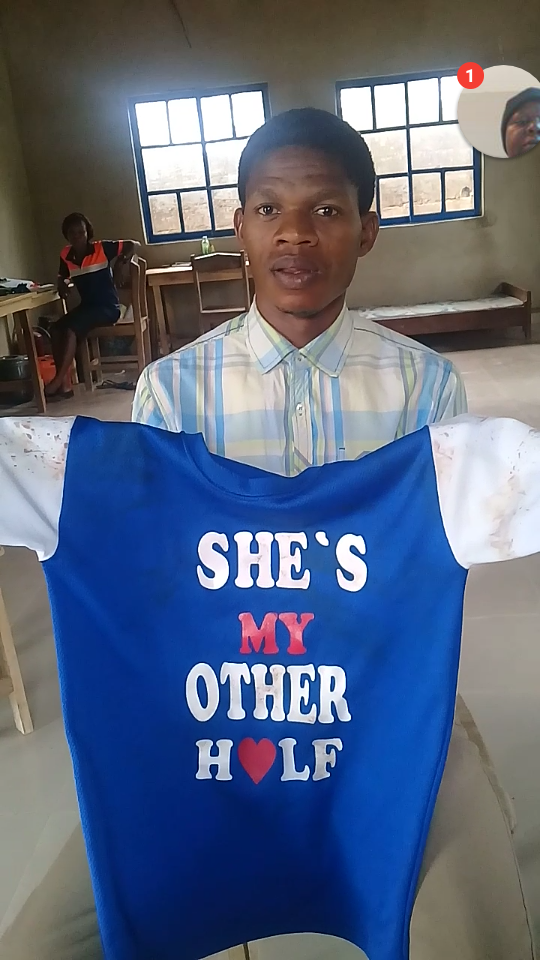 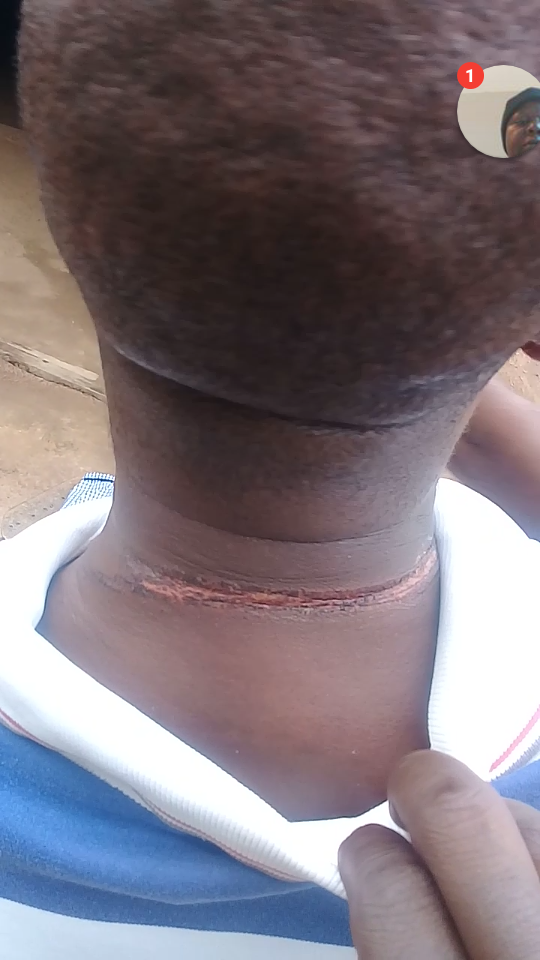 ”I  have two children at Ogo Oluwa  Nursery and Primary school, and on Monday when    my child , Samuel  Ogbonaya arrived from school, he said one of their aunties beat him  on the ground that he wore new uniform [ which is the old uniform the  school is  phasing out  . According to him , his teacher  said he should not come to school the following day.

I used to buy the   uniform from school, and for the fact that  this one has torn I went  to the market to buy the old one , they are still using it along side with the new one .  And since it is the same old  uniform they are still using .And on Tuesday the following day  I went   to the school and  I met Mama Seun the  school bursar and asked her why  they  are  beating my son and he said he was not going to school  unless  we go with him. I met mama Seun the bursar who denied  they were not chasing them out .

I went with him and showed them the torn old one, I pleaded to them that I had just paid 14,000 naira their school fees .I  told Mama Seun that I wanted to tell the teacher that I had no money to buy the new one now.I said let me go and explain to  the teacher but Mama Seun the bursar said no.On reaching there, my son said they sent one  Nove to call him and their teacher   started beating him.

I told the woman that I wanted to see her[ Mrs.Aladeniyi] the teacher , I explained to her that I had seen Mama Seun who said nobody was driven away because of school uniform but the woman  said I had no right to talk to her and should leave. I told her it is the part of the money I paid that they used to pay her salary , and I said I love the school that was why I was there and that the school met my standard .

She asked me to leave the class , we started argument  and she asked me to leave her office, I was dragging her hand before those people ran inside ,,  ..I didn’t beat her because I   know the implication they would say you beat somebody’s wife .On getting outside , I saw one of them called  Femi who just rushed me without asking anything , and I said can’t you help me out  and the lady too grabbed me . You can see my shirt .. the way they  tied me ,I was choking … … I was chocking, I am a Christian I will not lie even though I am going to court , I just tried to hit the boy with my head , immediately blood started rushing ,when they saw the degree of the blood rushing ,,,,, luckily the police people arrived and took us to the  station and I made my statement , we waited for the owner of the school, they said his brother , a pastor came to bail us .

I didn’t beat the lady , some of them  can frame up just anything.

However, the three showed evidence of their wounds, while Aladeniyi said she was injured and was hospitalized, Femi showed his bruised lips and teeth while Ogbonnaya showed his wounded neck to taiwoabiodun.com

The three were charged to Court and  had been remanded yesterday since they could not pay 20,000 naira in  fulfillment of  their bail condition.