I am in love with Yoruba Culture 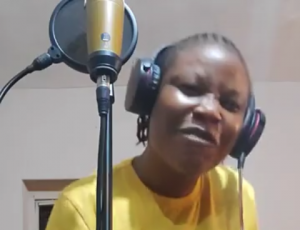 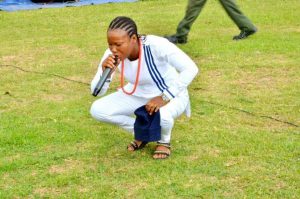 A MULTILATERAL COMBINATION OF TALENTS

Watching her from afar off one could take her for a man as she  was  dressed    in  Yoruba traditional  male’s   attire  but her feminine voice   and features  revealed her gender.  She is a stage wizard. She is a  multi-lateral combination of  talents.  While on  stage her  skills and talents are displayed:  chanting, singing, dancing, reciting poems and panegyrics   with eyes shut as if in trance. She  squeezes her face , tightens her lips, grinds her teeth as she  clinches firmly  on  the microphone  and would  suddenly go   on her knees and  immovable as if electrocuted. Her gap tooth  , complexion, voice and humility could melt a man’s heart.    She is excellent in the usage of Yoruba proverbs, idioms and aphorisms.Her words cool frayed nerves. She is rich in Yoruba composition , a gifted Oral Artist and  she chants Hunter’s poetry (Ijala Ode), poems and shower panegyrics  at ceremonies like wedding, naming, house warming, burial among others.

She responds to questions with proverbs and  would  render  chants with her infectious smile .Not only this, her humility is superb inspite her talent and wealth of experience. She knows the panegyrics  (oriki ) of almost all the Yoruba towns ,names, professions  and what have you. She does not need to think twice  or guess before she showers your oriki on you. This is the life of a 24 year-old  lady who is from Owolanke family in Oyo town. 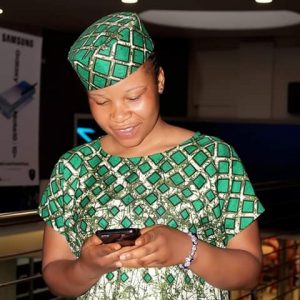 ”She is a stage wizard .She is a  multilateral combination of  talents. While on  stage she exhibits her stage craft as  she  chants, sings, dances,recites poems and panegyrics   with eyes shut as if in trance.” 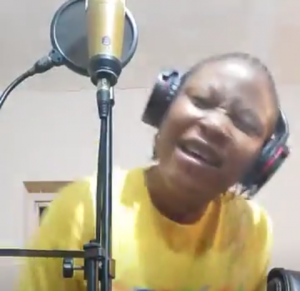 AT THE PALACE OF ALAAFIN OF OYO

Okoto Akewi is a household name in Oyo. She has become a brand .She is well known at  the palace of  Alaafin of Oyo .  She is a computer wizard .  Who has the gut to wake up Alaafin  of  Oyo Oba Lamidi Olayiwola  Adeyemi III  up in his palace?. Who will be in Iku Baba Yeye‘s compound and be making ‘noise’?.’ 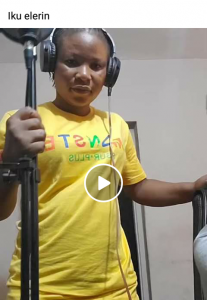 Who dares go to Alase Ekeji Orisa’s palace and be shouting on top of his voice?.No one  , no one can try it except only and the only one  the Okoto Akewi also known as Omo Iku Elerin  who with her velvet voice would sing, chant and praise the Iku Baba Yeye , Alase Ekeji Orisa ,the second in command  to God . According to her she goes to the Palace everyday to chant for Alaafin of Oyo.”I have been doing that since my secondary school days .When  I was in Oyo College of Education ( Special) I used to go to the palace during our Cultural week. For the past six years I took it as a duty to be going to the Palace daily to perform, you know  our Monarch loves Culture and he is  the father of Yoruba Tradition and Culture. .  ”, she said. 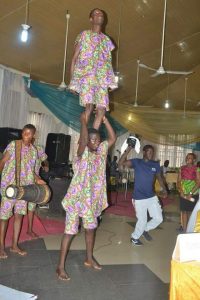 ”Who has the gut to wake up Alaafin  of  Oyo Oba Lamidi Olayiwola  Adeyemi III  up in his palace?. Who will be in Iku Baba Yeye’s compound and be making ‘noise’?. Who dares go to Alase Ekeji Orisa’s palace and be shouting on top of his voice?.No one  , no one can try it except only and the only one  the Okoto Akewi also known as Omo Iku Elerin  who with her velvet voice would sing, chant and praise the Iku Baba Yeye , Alase Ekeji Orisa ,the second in command  to God”

She wakes up the Alaafin of Oyo , Oba Lamidi  Olayiwola Adeyemi  III every  morning  with her golden   voice. When she opens her mouth and sing everybody listens .When she chant panegyrics (oriki) and shower praises on her clients they open their wallets to appreciate her .Her words is full of wisdom . She is talented, an enigma , an Historian and a promoter of Yoruba Arts and Culture and has made it globally accepted .Her voice  has spread and  gone  international as she receives calls from United Kingdom,Australia , America and all over the world chanting and raining praises on his clients. That is the  lady in Oyo who is the raving moment shaking the Ewi Industry .Welcome to the world of  Ogundele Nike Suliat  aka Okoto Akewi Omo ekun elerin. 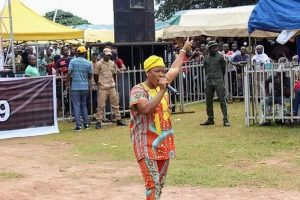 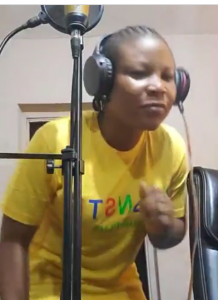 I  started chanting panegyrics at age five.  I am now  24 years of age  .My parents supported my work  because  it  is  a congenial occupation in the family   .My grandfather was a Hunter chanting Ijala   while my late  father was also in the  same profession   but for  one reason or the other   he stopped and went into business. He died about one and a half years ago.Only my mother   that is alive today  .I started chanting   while in primary school .I continued in  secondary school, during the Cultural programme in School I   used to go to the Palace to participate in the  Cultural activities .

At my NCE level I was  always invited to  perform .So when I completed  my NCE program, I went fully into it”.

Asked to tell the meaning of Okoto Akewi, she laughed , then shook her head as if she remembered an episode and then said ”It has deeper meaning, it is pregnant with meanings”,she continued as she spoke like a Philosopher  ,”you know  Life is like a game, Okoto ( Apex of a snail that cannot stand upright, a brown seed that rolls  ) it is a piece of brown seed   that rolls when played , it is like life , unstable and you don’t know what its result would be.It is unpredictable.Life is unpredictable , full of disappointments. That is Okoto Akewi.I have faced and experienced some things in life and I decided to have the name for my group”.

WHY I WEAR MEN’S CLOTHES

Asked why she wears male’s clothes all the time , she defended herself ”I love  wearing men’s clothes because  it makes me free, allows me to swing sideways and prance around on stage. It makes me  to be free and   easy while  on stage”.She beat her chest and said ” I cannot count the number of male’s clothes I have , I have a lot and I love them all”.

OUR CULTURE IS RICH

Okoto Akewi said  she didn’t know  the  profession would gain world acceptance  as it is now , she said ”I  never knew it will be generally accepted like this.I was just playing with it just doing what I enjoy doing most until it became part and parcel of me. Today many invite me to parties, naming ceremonies, wedding ceremonies and burial ceremonies ..I enjoy doing it” 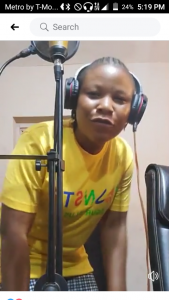 She pleaded to Yoruba people and said ”Our culture is going down and we need to  make sure it does not go into extinction .I  thank God for  everything is going on well, thank God things are working fine.We  are from Oduduwa and our Culture is rich, we should take our Culture to  higher height .North, South, East and West , home is the best, we should not abandon our culture for foreign one” 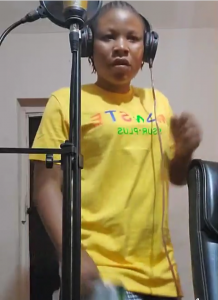 She gave the importance of Chanting panegyrics , according to her ”when we chant oriki,  or praise  you will be happy, it soothes your nerves.When a wife is angry let the husband shower oriki on her, and their differences ends, no more fighting .It is our tradition and that does not mean we are idol worshipers”

SOURCES OF  MY   WORK

Apart  from having Ijala  background, she said she goes from town to town asking elders, doing research on every Yoruba town’s panegyrics , stories and history . She said ” I travel to places, to towns  and all areas in Yorubaland  asking and seeking knowledge . 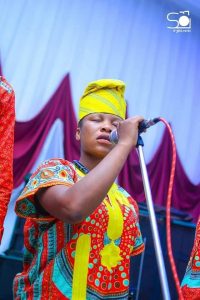 HOW I  MAKE MY MONEY

Asked how much she charges Kabiyesi Alaafin as she goes to the palace to chant, she replied ”He is my father and the father of Yoruba Tradition and Culture, I cannot charge him but what he gives me is more than charging him. When I chant at  the palace of Alaafin of Oyo , Oba Lamidi Adeyemi , father of Yoruba Tradition and Culture , Kabiyesi would just give me money, huge one, he would not count it , huge amount of money, huge money. He loves  Yoruba Culture. Kabiyesi is a great Oba. If not this novel  coronavirus  I would have been   at the Palace by now chanting  .For public performance they hire us and we are ready to go to anywhere even we are ready to go to America if invited. We do charge them but I will not tell you how much I charge(burst into a prolong laughter).

Okoto Akewi said  although she enjoys the profession  but faces challenges at many of the parties she is invited to. She said “when we are invited to perform at occasions    musicians would not release microphone  for  us to use , they see us as  are  sub entertainers , they don’t want to release  microphone  for us to use .I have been to an occasion where I was to   sing or chant but was not allowed  as the musician refused  to  give us the opportunity or release  the microphone .I  remember an occasion where we had been paid but did not perform yet the man  who invited us  did not collect the money back .So what I normally do is to   tell the  Celebrant  to inform the musician to let them know when we are to perform”. 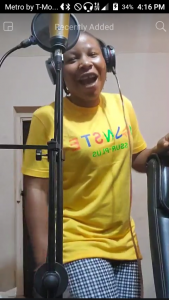 ”When I chant in the palace of Alaafin of Oyo , Oba Lamidi Adeyemi , father of Yoruba Tradition and Culture , Kabiyesi would just give me money, huge one, he would not count it , huge amount of money, huge money. He loves  Yoruba Culture.Kabiyesi is a great Oba. If not this novel coronavirus  I would be at the Palace”

MY FIRST BREAK EVEN

She speaks about the first money she made ”the first money I made was  in 2017 when a man sent  100,000 naira (one hundred thousand naira) to me  appreciating my work .I cannot mention his name .He was the first man to do that he lives in America, the man said he appreciates my work. Another  man gave me 300,000naira  to appreciate my work”.On what she does with the money , she said  .The first instrument  I bought is Gangan, the Yoruba special  drum. I bought costumes for our  Entertainment Group we wear for outing .”

I AM  GOING BACK TO SCHOOL

Okoto Akewi said she would soon go back to school  to study Yoruba as a Course she said ”I have National Certificate in Education (NCE)  in Computer Science from College of Education , Oyo Special, I am going to Obafemi Awolowo University , Ife  to read  Bachelor in Arts degree in  Yoruba Studies in order to have more knowledge in Yoruba Culture ” 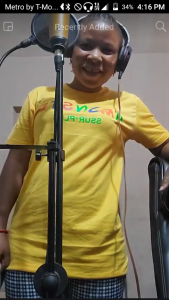 As she finished the interview she gave a parting gift by pouring oriki on this Reporter ,