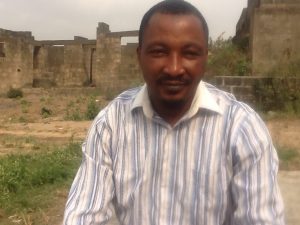 ………I arrested 20 robbers one night

……The real meaning of Otta

At home he  is gentle like a lamb but he  is as brave as a lion  and as strong as an ox when there is a cause for it.  He is a man of few words. Yes, he  looks calm and peaceful and almost monastic. But don’t underrate him. Although his look could melt a woman’s heart while  his appearance and soft voice  could make Miss World   fall yakata for him and say ‘I do’ . Still  he is not that simple and easy.

But wait, there is more to this man than his features. He is a generalissimo.When the light- complexioned man removed his shirt and showed incisions from his head  to toes then nobody will tell you  to fear  him  as  you will not only pee  in your pants but will also doff your cap for him and give him more respect and shout ”Shon Sir!”. Yes, the fear of Akinrogun is the beginning of wisdom to  criminals.

Call him a warrior . Label him a Generalissimo.Tag  him a local liberator or ”saviour” , the Obafemi  Awolowo  University graduate  of  Home Economics is ready to give you  Egba stories  without opening a book!. Despite his simplicity he talks tough, he is an Historian as he knows the Awori, Egba History like the palm of my hand .Known and respected in Sango area of Ogun State. This  is Chief Adeniji Olatoye Ismaila, the Akinrogun of Egan .

Here is a man who acts his name , Akinrogun ( Akin who sees war). He  is a warrior whether local or state a warrior is a warrior .He rescued  his village from being plundered by the so called ‘enemies ‘. Again here you  meet Chief Adeniji Olatoye Ismaila  .

He introduced himself  ”My names are Chief Adeniji Olatoye Ismaila the Akinrogun of Egan.  I  am 48years old (now 50) I became Akinrogun  of Egan  in 2007 .

I BROUGHT PEACE TO SANGO

According to Akinrogun, he was born and raised in Abeokuta ( Totoro) , and his  village is Lapeleke .  He introduced himself  ”I’m a painter and a designer  by profession .When  I came to  purchase a land  here in the year 2002   a group of people (names withheld) started disturbing  us . We all came to this town not knowing that it is the land of   our forefathers, but when these people  (names withheld)  continued  disturbing us  then in 2006 we went to Owu to inform our leaders that we were facing war with the …….( names withheld)  they then implored us to dig into history and confirm that we the Owus owned the land and should know what to do . Baale Idowu Jacob who was the leader then tried his best for the community .I went to them and   introduced myself that I am from Ololo household family in Abeokuta , and also Lapeleke 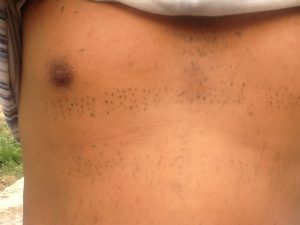 Incisions all over my body

Akinrogun went down memory lane to remind us the war he fought, he said  ”it was no war , no peace ”. The  two oppositions fought with all manners of instruments. Akinrogun said “the  fight between the Owu and….. (names withheld) was serious then, our opponents  shot a lot of bullets and used juju, but we overcame them , and that was in the year 2007. We  too fought with juju, guns, and  we advised  our people to go home and research on  what it takes to fight a war. We told them  to  go and reinforce spiritually from their father’s families whoever has , in the end our opponent’s  king  fled , he is dead now”.  Akinrogun boasted  ”later when we became Chiefs we were relieved and peace  has been reigning since  then.”

He claims that  the ….. ( opponents) were  deceiving people that they are offering sacrifices but disturbing them , he said “they pretended to be offering sacrifices but used it to foment  trouble , thank God that Egan town and Igbo Olowu are peaceful today , if we want to  offer any sacrifice or rituals we do it in the midnight when everybody had returned and retired home! , and if any of the Bale is dead and there is need to offer sacrifice and rituals we do it in the midnight so as not to disturb others ”

Asked whether he has juju, he exclaimed ”don’t you know the meaning of Akinrogun? Whoever  takes the title of Akinrogun must have juju, money and connections”, he stated.

The  Warrior said he has only one wife, and says he does not unnecessarily get annoyed , he said ” position, power and money are powerful tools that push one but one has to be careful in life for him to  live long.”

Does his wife fears  him?, he replied ” Yes, she has to because of all my activities”, he responded.

I ARRESTED ROBBERS IN THE DEAD OF THE NIGHT

He recalled an incident some years back ” An incident happened in a midnight and   I was called   to come to their rescue.I was in my Boxer pant only and was not prepared but  I know there is God in His highest coupled with our innocent  and sincerity for we did not betray anybody , and God assisted us , we caught the robbers  and handed them over to the police . They wounded some people, they used cutlass on me but it had no effect on me.

”They were  about 16 armed robbers that   invaded our place. I wore my boxer , called my colleagues and went after them . With some of my members  we went out to  face them. I thank God that we eventually arrested them after a lot of exchanged of bullets .They shot me several times but their bullets had no impact on me. We arrested the robbers in the end  , infact it was a gallant fight” .

WHO IS AFRAID OF AKINROGUN?

Asked whether he is not feared with the incisions and manner of arresting criminals, he replied “My wife fears me , my friends too are afraid of me.You know position, status, money and juju could push someone but I have to be careful  if I want to grow old”.

On  the story of Egba , he said he is rich in the Egba’s  History because  he is from  a royal house.  He started:

”Many, many years ago  when the Dahomey waged  war and wanted to take the Yorubas as slaves   the Egbas resisted and fought back. The Egbas  came from Igbalefa, those called Igbalefa are Ake, Gbagura, Oshinle, Owu  and Keeta . They all came together fight the Dahomey , they fought the war for years  and killed the King of Dahomey in Oke Ore , that is why till today we have  the powerful warriors, babalawos and powerful men are there till today. And that is why they observe ‘Ose’ every Monday  there. The meaning of ‘Ose’ is that the Babalawos would gather together there to meet the gods  that assisted them to kill  and  beheaded the Dahomey King . After the war,the Warriors left . Who is Awori? There is nothing like Awori. Who is Otta? there is nothing like Otta . It is  the  people from Kogi state, Oyo and  and other towns  that would come here  to trade that is buy and sell…..the Kogi would say    ” A ti n’lo ta, a ti n’lo ta” (we are going to sell or trade). Go and read the History of  Yoruba, it is  in their archives for you to read. It was when the Egbas gave the Aworis some space or piece of land ..They were given 500 meters in Sango and it is from that 500 meters in Sango  that we have the local government  of Otta . All Iyana Iyesi, and Ilobi etc   are owned by the Egbas. But now we thank God  the Egbas rose up to claim their right..

”We have Oba Igbalefa in Iyana Ilogbo, The Owus  have reclaimed Sango, half of Sango belongs to Otta and half of Iyana Iyesi belongs to Otta , and Awori also have theirs because it was Egbas that gave them to be farming there , and when they become old and have children they were no longer customary tenant , they were left there to be enjoying their lives”.

Asked where he got all these stories , but the man said ”thank you , if a child does  not witness event or history  he would  hear tales or meet the story teller, which is the father of  history  ( Bi omode ko ba ba itan , a ba aroba, aroba si ni baba itan) because I was very close to the elders and wise old men who are historians and Griots. It is a long story but take it like that.My father was not a king but he was the  father of a king. I am from a royal family.”