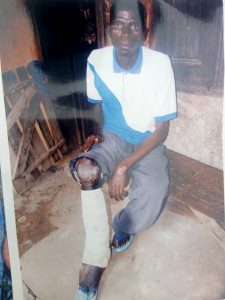 ……In coma for three days

…… My Fiancée  deserted me

…..Don’t let me be useless in life, he pleads

For  this 40 -year-old man , Ojo Ganiyu Ade life has been miserable for him. According to him, he has been in agony for the past seven years .He  has been eating from hand to mouth since the year 2013. Reason : While in Lagos he was involved in an auto crash in 2013  on his way to work , he was still receiving treatment  but could not complete it  and unable to  also  fend for himself due to the auto crash that had incapacitated him.

Ojo  narrated his harrowing experience to this reporter  ” On that fateful day I was in a public transport in Lagos going to work when I suddenly heard a loud bang and that was all I could remember .  I later found myself on the hospital bed at Igbobi Orthopedic Hospital . I  saw my shattered bones, my two legs had broken and twisted. I was told that I was in coma for three days before I came back to live”.    According Ojo , he is  from Owo, ”I live at no 13, Ododasa st, Owo, Opposite Mobile Station’

”At  Igbobi Hospital I  spent one year and four months after I had undergone  two major  operations  on my leg. When I could not continue to  pay the hospital bill  the doctor advised  that I should  turn to an outpatient  and be coming from home as the feeding and admission  bill   issue would be deducted from my hospital bills .

FIANCEE RAN AWAY AS LANDLORD EJECTED ME

He continued his pathetic story ”I began to go to the hospital from home , but I had barely spent one  month at home when my landlord ejected me from my one room apartment . Not only this my fiancee ( names withheld) deserted me .She came to the hospital to see me twice and that was the last time I saw her for   I did not see her again .I therefore  accepted my fate . Today I have no wife and no child at the age of 40”. When my landlord evicted me I went to church where I stayed for some months before I came back to my home town, Owo” 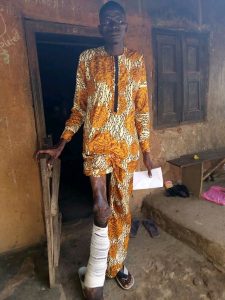 AT THE FMC, Owo

”When I got to Owo , I went to the Federal Medical Centre , Owo to continue my treatment. Last year the  doctors  in charge of my case said they  would  do skin graft  for me   and was told that the medical expenses  would cost    220k  but when there was  no money  so I started   going to Pharmacy  store  to purchase what I needed for the dressing and was doing it on my own .that was how an stopped  going  to the hospital .Recently when I was having excruciating pains  and went to the FMC  again last week , on the 8th of May the hospital bill  has gone up to 505k according to the doctor. The doctor said  I would need  skin graft  and another operation on the legs”.

Help , I am dying  – Isah Husainah

Help , my sister is dying

…….Her Fiancé ran away

For this woman , no other words comes out from her mouth than ” Help !, I am having pains, pains and pains”. For   Hussainah in the morning it is pains , in the afternoon it is pains and at night the pains would not let her sleep according to her Cousin. “She  groans in pain everyday , she cannot eat properly or drink water with ease as a result of the pain” . .Accoding to information gathered from her sister, Husainah has been like this for the past three years.

The Community head of Unaun , Owo , Prince Olanrewaju Abegunde said he is sympathetic with the woman condition  but does not have enough money to assist her, he  said ” Hussainah’s sister has been crying begging for financial help in order to take her sister to the hospital” . Prince Abegunde continued ,” though the woman has no energy to talk  as she groans in pains , she said her  illness started three years ago when she discovered a lump on her breast and  went to a private hospital ( names withheld ) to operate it in Lagos but immediately after the operation she started feeling pains again from same breast.No one knows whether it is Cancer or not. She showed all various of laboratory  tests she has done and she is still having pains”.

” We have no  money to take her to the hospital , and we have appealed to  many people but no help””, said her sister .

Prince Abegunde said ” I am begging the good-spirited Nigerians to come to her aid before she dies.She lives in OWO , Ondo state .She is undergoing pains, she needs help”.

According to her Sister, Hussainah  is 30 years , she has no husband , ” You see, since over three years she has been suffering like this no man even looked at her, she is just 30 years of age .Please help her before it is too late, she has no parents and we are  poor”

To reach the woman