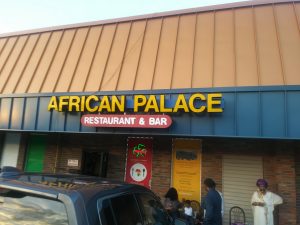 Parked at the frontage  of the Restaurant  are fleet of  exotic cars . On the facing board of the  building  is a  big   signboard  and boldly  written on it is    AFRICAN PALACE   RESTAURANT &  BAR . While the artworks of  Caribbean   Cuisine  artistically displayed  on the door  could make one  salivate as one glances at the  artwork . 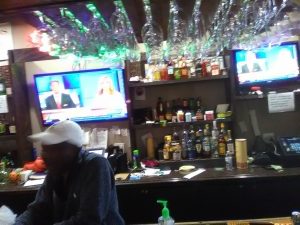 Assorted wine glasses  , Wines and Whiskies at the Bar Section

A quick glimpse of the restaurant  welcomes you to the well -designed and well- arranged banquet hall .The Restaurant furniture  in the Banquet Hall are well -crafted   wooden chairs. The beautiful sparkling lightnings brightens the Palace  coupled  with different  disco colors that would  remind you the Children’s rhythms of Twinkle , Twinkle Little Star…... The lights are all sparkling and producing  different  colors with  effects .The sittings are  well arranged  and  colorful  while the aroma of their food wafted in  the air as the sliding door to the kitchen was slightly opened.

Looking around one could see people of different nationalities , of different colors  and races asking for African food!.African food?, Yes! with  affordable prices. No wonder  African -Americans are yearning to go to Africa their fatherland  from where their ancestors came from.What makes African Palace Restaurant   tick is a four letter word : L…..O….V …..E  for African Food . 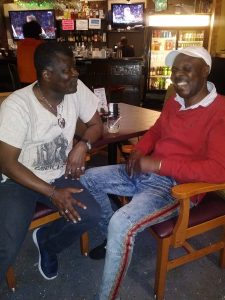 BoN during an interview with Osun

At the  Bar section  are assorted drinks (not Ogogoro) , in fact the  bottles are of  different shapes and colors  while the contents are of different colors and taste.  A self- professed Born Again Christian who claims 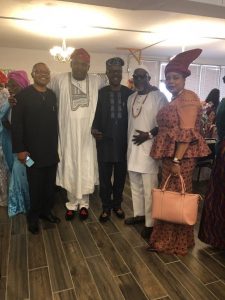 he does  not take  alcohol  could be tempted  if he glances at these well –   designed  bottles or could be  attracted by the  beautiful colored contents calling his  attention to  gulp a  pint. Not only this the Wines also could make  one  ask for more with the way the  well- crafted bottles  with different designs  are displayed .

On the shelves are  Vodka,Gin, Rum, Tequila, Whiskey,Brandy, Beer, Vermouth,Mezcal,Irish Whiskey,Pisco, Canadian Whiskey,Schnapps among others. What of the glass cups ? A set of over 150 wine glasses  are beautifully  arranged upside down under cabinet   and the  setting  could make you beg  to be arranged along with it! .Yes, they are  on top hanging , shining., but no, they will not fall off!…That is African Palace for you, where everything is enticing or attractive.

According to Prince  Gboyega Agaun ( aka LOBO)  who describes the beauty of  the Bar  and said the setting of the wine glasses alone  could make one ‘commit’ if one is a non -drinker , he added ” In African Palace you have different types of Glass wine like Cabernet, Burgundy, Bordeaux, Zinfandel Pinort Noir , Rose and Chardonnay  which are meant for different types of wines like White, Red , Sparkling and Rose wines.You see, I love hearing the clinking of these wine glasses which thrills me” , Agaun said as he was counting them on his finger tips .  The Prince  who has been patronizing the restaurant for years is from Owo  in Ondo State , Nigeria . He said  ” this is where we entertain visitors from Nigeria, United Kingdom and all over the world , it is a super and good place to be , and I mean it because you would be satisfied with all what you need ”

Engineer Samson Adekunle  Obanigba who has spent over 30 years  in America  and now in St.Louis said he  does not bring visitors here to entertain only  but also  sees  African Palace as a place for   business meetings.He said ”apart from eating here this place is also used for  Club meetings ,  engagements ,ceremonies   and parties.  My  sister In-law used this Hall to   to celebrate   her birthday , so also my mother in law . 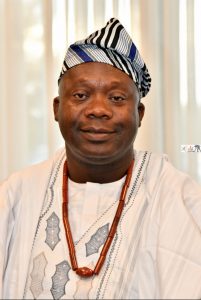 This  place is a good place to be  with their neatness and high standard of good quality food , it is super excellent “. 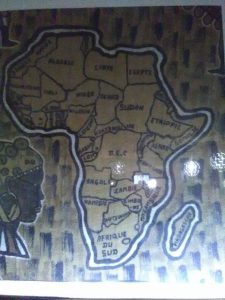 No wonder the name African Palace Restaurant is popular in St.Louis , State of Missouri in America.The name African Palace is synonymous with Kofo Osun. When you mention African Palace then they will mention Kofo or Koffi. The moment you enter African Palace you have  arrived your native land  or  home!. If you are from any tribe in Africa then walk in and ask for your menu. A man from Osun state  in Nigeria who begs for anonymity said ” I come here every Wednesday to take home  Oka  with Obe gbegiri also called abula. I am from Ogbomoso in Nigeria. The food here is fantastic and I no longer  miss home again”. Julius (surname withheld) is another  customer that patronizes the restaurant, he is  from Benin in Nigeria .Julius said ” I eat ogha, ogbonno , along with periwinkles and pounded yam here infact this  place is a -must for lovers of African food,this place is home away from home. A South African man who visits African Palace said ” I fall in love with their suya, the way Koffi ( Kofo) prepares it  is spicy , it is delicious. ” 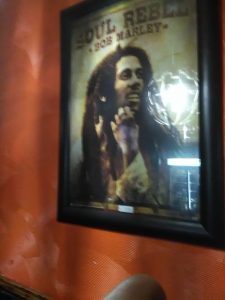 Yes the restaurant is always   full and busy from Tuesday to Sunday. On Friday night the workers are as busy as bees . Why? the answer is it is Reggae Night. On Friday you are welcome to the DJ lightnings as  one could see the disco ball  or mirror ball or glitter ball which reflects lights  in many directions. The   Dee Jay is ever  ready to give you all  types of Reggae music(Roots, Rock , Makkosa, Punky)  with his electronic base speakers  booming from all corners of the dancing Hall. African Palace  have the latest Reggae Music in the world.Here Jamaican and Reggae Music  lovers are seen with their dreadlocks swinging on their shoulders  or descending  down their backs while you heard  them speaking their patois .They greet you shouting  One love with their clenched fists , or give knuckles touches as a greeting while others would scream Jah Rastafari . Attend  a  Friday Reggae  night and you would beg the Dee Jay not to stop the  music.

While Waiters, Waitresses go  around with smile asking customers what they would like to order from the menu , carry out is also available.

Ronnie Jones describes African Palace thus “I love African Palace . I had never  tasted  African food  before now.  One of my co-workers suggested I tried  it out for he  always bring African food in for himself. Not only this , their Suya  is a specially prepared meat is quite good. Taste their food and you will come back again”, I must have it at least twice a week the African -American who married a Nigerian boasted, and added ”  I enjoy the Friday Reggae Night, this is a place I always go to defuse my tension and relax by dancing to several Reggae music”

A  visitor  from Nigeria  came  looking for one Kofo Osun for a  private discussion . One of  the Servers   asked him  to exercise patience .The visitor was shocked when  he was introduced to the man who had been serving   customers and  pacing ups and downs, the visitor could not believe.Why? He expected  the manager to be in his office, shouting and  commanding .’That is the  Koffi  you are looking for , the owner of the African Palace.” 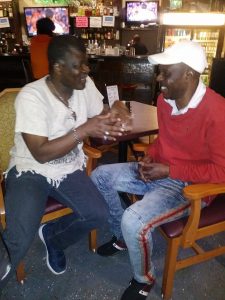 The visitor was shocked to his bone marrow seeing the Managing Director serving .Unlike in Nigeria where the owner would cross his legs wining and  be ordering and supervising his workers , but for Kofo, he along  with his co-workers worked side by side and crack jokes.

Kofo is a man of few words. While some call him Brother, others call him Uncle ,but he is called ”Koffi” by Americans, African-Americans , Indians, Mexicans and other nationalities,  who pronounce his name Kofo as Koffi , a Ghanaian name. But whether you call him Koffi or Kofo he does not blink an eye , he would only tell you that ”that is how they can pronounce it ”. Kofo is from Owo, Ondo State , Nigeria.

Kofo  is about five foot 10 inches tall. He is handsome and with an oval face .He is  charming and loving .He smiles always  like a man who wins millions of dollars from Casino always .Yes, some call him a Philanthropist , others call him a role model.He is approachable as many testified and gave testimonies of his generosity  .

When approached , he with full smile started his story “I have  spent 32 years  here in America and I thank  God for His mercies on me”.He continued as he gave reasons why he established the Restaurant, Why he named it African Palace, his love for his home town and why he established a sister African Palace in Akure , Ondo State , Nigeria.The  reason behind his Friday Reggae Night , .Listen to him in this video.