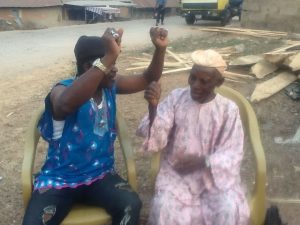 Not many people  know his name except his appellation ‘Obè Àkùko’. The Octogenarian speaks  how he came to Owo, his nickname and many others. Taiwo Abiodun reports

EXPERT IN WATCH REPAIRING
His name was   household name in  Owo , Ondo State in the ’60s till early 2000 , for he was among the best few  watch repairers in the ancient town.  In his shop located at the  Late Pa Oladoyinbo Ojomo’s house opposite St Patrick’s Anglican Church, Ijebu-Owo, where one could see different types and sizes of ancient  wall clocks, table clocks and wrist watches for repair where the high and the low come to repair their watches.
He is a man of average height, rich in Òwò proverbs and poetry . Not only this ,the  octogenarian could speak Òwò dialect fluently despite the fact that he is  not  a native. Popular and loved by the old and the young because he is jovial and had never been angry.
He was so popular that if he contested for the  post of a Counselor he could win. When hailed ”Obè Àkùko’!, Obè Akuko!! Obè Akuko !!!” his response would be”You will partake from it”. “You will be great” .You will not faint”, “Your wife will not run away”, ”you will not fall down like coconut”  etc .

But then  if you try to abuse his simplicity , degrade him and  shout ”Obe opolo”[toad’s soup], then he would reply you thus  ” You will keep it for your father. That is your father’s delicacy ”.
He always  wear six or seven wrist watches and that was the way he advertised his business.Mind you all these watches had different time , some were not  even working . Ask him to give you one  of the wrist watches  he would promise to give but  you will never be given. That is the ever jovial and smiling man who harbors no-ill feelings against anybody,  Obè Àkùko 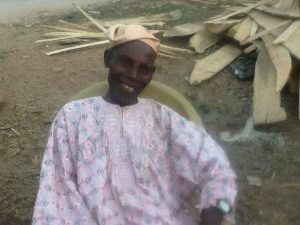 MY NAME
The 80 -year -old man said “My names are : Alfred Wadai popularly known as Obè Àkùko. I am from Ohodua in Ishan ,  South – East Local government . I was born in 1939 but I don’t know the day for my parents were illiterate and did not know the date either .

” I learnt the watch repairing skill from an Ibo man when I was young and  after my freedom in 1955 I came to Òwò. I did the work for over 50 years before I pensioned myself .Today things have changed as nobody repairs watches again. I am married to one wife. I have one head and as God created Adam for one wife so I am “, he said as everybody in the vicinity burst into laughter. 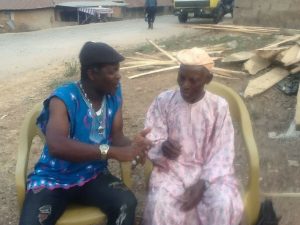 STORY BEHIND  Obè ÀkùKo
On how he earned his nickname , the 80 -year -old man gave a roar laughter and started his story: “One day, I think it was in 1965 I went to the late Òwò billionaire , Chief Jide Fagboyegun’s poultry farm to buy a live chicken and people who saw me on my way back home were shouting on top of their voices” Obè Àkùko!, Obè Àkùko!! Obè Àkùko !!!” , in a mockery way. They  were curious and   asked  what I wanted to use it for, because I was not rich and buying live chicken then was exclusively for the rich .
I replied them ” Wa  jobe, Aye a ye, Waa dagba etc” .Since then I have been called Obè Àkùko and only  few people know

IN LOVE WITH DATES

Obè Àkùko was fond of writing the dates he rented an apartment on the back of the door of his room , he said ” Any house I packed into I always write the date at the back of the door. I was once living in Baba Bayode’s house ( Baba Sola) at No 12, Èhìn-Ogbė before I relocated to Ìjèbú- Òwò because business activities in Èhìn -Ogbè was dull for they soon go to bed between 6:30- 7pm ”, he continued ”but for people living in Ìjèbú it was jolly , jolly and I said I must come to Ìjêbú that was how I went to live in the late Pa Oladoyinbo’s house ( the father of the present Kabiyesi Ojomo Oluda ) at Ìjèbú where commercial activities were at the best and they sleep late as workers would come for their watches. I was not driven away or ejected from their house or any house in Òwò throughout my period of my tenancy”, he said with confidence .
WHY THEY CALL ME EUNUCH
For Obè Àkùko who was serious and dedicated to his job , because he ignored women , he was blackmailed and called eunuch , he said ” in those days ladies called me eunuch because I did not chase them or go after them or press their    ‘organ’ “.
HIS RESPONSES WHEN PRAISED

Whenever he is praised or hailed as ‘ Obè Àkùko , ‘ he will respond by saying ” wa a jobe”,( you will eat sumptuous soup), ”we nii jabo”( you will not fall), ”Òrò re ti dayò ”( your case has turned to joy ) , ”Waaaaye”( You will survive) etc.But when you shout Obe opolo (toad’s soup) be ready to hear his  response like ”Your father will partake in it”.

WHY I BURNT MY MATTRESS AND BED

According to Obè Àkùko, he is no longer a tenant in Owo where he spent all his life . He with all gratitude to God and full of humility said ” one of my children built a house for me in GRA, and when I was packing in I burnt my mattress and bed , and moved in with a new set”.
As he said this he gave thanks to God. He stood up , looked at everyone as he was hailed by this reporter , and he responded in Òwò dialect” Wàá dàgbà, Wàá jobè, wéé níí wè sú Òràn, Wàá gbóóó” etc.( You will grow old, You will eat sumptuous soup, you will not be in trouble,  You will grow old).
As the old man was  walking back to his residence, those who met him along the way and those who were in their houses and heard his voice continued hailing him saying , ”Ooobe Akuko! Oooobe Akuko!!”, the old man too was responding  ” Waa jeun pe, aya re ni salo, waaa dagba, weee ni we sun oran”, [ meaning You will live long, you will grow old,your wife will not run away, you will not be in trouble ).
But when a rascal boy  cried ” Oobe opolo,Oobe Opolo‘ (toad soup!, toad soup!!) he too responded ” waa gbede B’are, waa jeee”[ When he was greeted toad soup, he replied ” You will keep it  for your father, you will eat it ). What a wonderful and a witty  man loved by everybody.