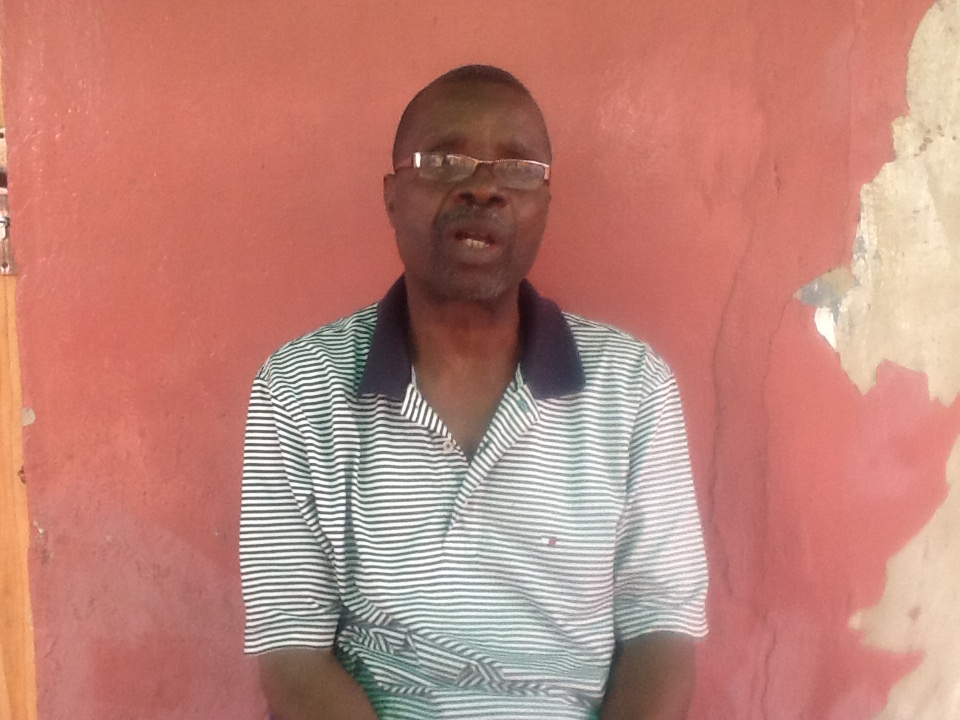 Prophet Olagunju
“I have not taken my bath since 2001”
Cleanliness is next to Godliness the saying goes, but this is not so to Prophet Wale Olagunju the Presiding Bishop of Divine Seed of God Chapel Ministries, Ibadan. The man of God , Olagunju claims that God instructed him not to bath since 2001 , and he has therefore not.
The Man of God who lives with his family but sleeps in another room to avoid having sex with her wife , he said “since God instructed me in 2001 to avoid sex, stop bathing , I have then separated myself as I sleep  in another room . It is God that instructed me to do so”.
Asked when he would have his bath. He responded ” when God asks me to go and bath. Am I smelling ?, No” , he answered.
Asked whether some critics would not take him for a mad man, he again responded ”
In Church
On his table are various newspapers where his yearly predictions were published. He packed all his personal effects in a room where he sleeps .
He admonished those who faulted his predictions early this year that Obasanjo will quarrel with President Mohammed Buhari, ” now you can see what happened sometimes ago as all Nigerian newspapers are awashed with OBJ’s letter he wrote to President Buhari”, he said.
The man of God said ” I made a mistake voting for Buhari, he is not our Messiah but then NIGERIA needed him to wrestle power from Jonathan .I voted last during the late Obafemi Awolowo’s election and that was in 1979, but thinking President Mohammadu Buhari would perform , I voted for him see what he is doing now, he has derailed”
I have not taken my bath since 2001″Yes , precisely 16 years and that was 2001 to date I have not taken my bath and the instruction is from God almighty .I move from mountain to the church and my office ..seeking the face of God in holiness .
“People cannot run away from me because I am not crazy .I am not a mad man . I live a normal life , if I don’t tell you I have never taken my bath you will not know”
“On my nails ,everything is okay ,look at my nails now .If I wear my shoe you won’t see it like this , that is the point”.
The man whose predictions always come to pass every year said he is a God – sent …
2018 PREDICTIONS OF PROPHET WALE OLAGUNJU

1. God Almighty warns Nigerians not to rely on current set of leaders but on Him as the only solution to their myriad problems as they are not the Messiah that will take the country to the promise land.

2. God says Nigerians should continue to pray and rely on Him as the much anticipated Messiah that will rescue them from the task master and take them to the Promised Land will soon emerge.

3. God revealed to me that President Buhari is still carrying terminal disease and if Nigerians failed to pray for him, the stress of office will lead to his collapse and this might result in sudden death. God warns that the President should commence serious Prayer now to avert the type of incidence that terminated Yar’adua’s regime.

4. Before year 2018 runs out, God revealed that Nigerians will demonstrate serious hatred for the Buhari’s government. This is going to be a confirmation that God has completely rejected President Buhari and his APC led government.

5. God revealed that Nigerians will surprise Buhari and APC with their votes come 2019 general election.

6. God further revealed that because of many innocent blood shed by the Buhari’s government, he should commence the preparation of his handing over note in earnest as he will lose the 2019 presidential election should he venture to contest it. God says, the tag of Ex-President has already been placed on Buhari.

7. God says He will raise adversary against President Buhari and his government from all angles such that the campaign to remove him from office will be so tense. God says this will be because he (Buhari) disappointed Him by his failure to carry out His instruction.

9. Nigerians should commence serious prayer for Chief Olusegun Obasanjo now so as for him to witness the inauguration ceremony of the next Executive President of Nigeria.

10. God says it will take divine influence to save APC from losing out in the 2018 gubernatorial election in Osun State.

11. Prominent leaders who are holding Nigeria hostage will pass away and new generation of leaders will emerge but Kanu of IPOB will not be among the said leaders. This is going to be a sign that Nigerians will not go to war, but God revealed that break up is imminent in the country.

12. God Almighty says he will open the eyes of the Yorubas to discover that the North is dominating the country and this will boost their morale to take a bold step of breaking up the nation.

13. God revealed to me that he has anointed one Pastor Kalejaye as the next General Overseer of The Redeemed Christian Church of God.

15. God further revealed that the moment the imminent break up occur new lease of life, light and glory will commence over the nation Nigeria.

16. The days of the current Inspector General of Police in office are numbered.

17. God revealed to me that He has rejected the so called Bishops and Pastors who have led His church in Nigeria into pathetic state.

18. God further revealed that He has rejected them because they failed Him in holiness and are using satanic influence to deceive people with miracles.

20. God of heaven says INEC will disappoint many candidates in the 2019 general election.

21. God says for the above reasons He will raise a strong end time victorious army to fight end-time victorious battle in the 20th Century, warning the youth to prepare to make themselves available and not to follow the ways of these expired leaders.

To be continued next week