This reporter  ran into  this man in a Beer Parlour drinking heavily out of frustration. He narrated his story below 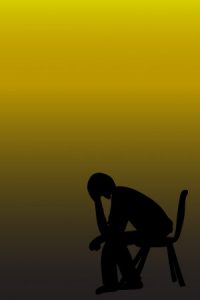 ” Some years ago I  registered with   a fake name in an hospital . I kept avoiding  a woman each time she passed   by me .  Each time  she tried  to smile at me I would   frown my   face and pretended as if I didn’t see or know her. I wore my dark goggle to avoid being seen or identified  by anybody while I was praying silently within me.   ”Next person!”, the laboratory  Phlebotomist called me  and I went in. The Phlebotomist brought out a syringe ,  drew my blood  for blood work and asked me to come back for my result three days later.

”On the day of  appointment,  Thursday, I went  back to the hospital to know the  result as advised . The Phlebotomist  called my name  and advised me  to join  the queue going for Counseling . I asked ”what type of counseling?. But you asked me to come for my result, what counseling again?”. He  smiled and advised me to sit with the 20  other patients  sitting on the bench . I reluctantly obeyed, expecting  to see  the doctor. From there we were led into a big  Hall . Lo and behold I  now met the woman I had been avoiding  since I had been coming to the hospital face -to- face  .

” The woman stood on the dais with her stethoscope dangling on her two breasts .She politely  addressed us all ” Don’t be afraid , HIV does not kill again as it used to be   but you have to be taking your medication as instructed. Look at me , I am a medical doctor and I have been living with  HIV since 2001 and still alive. It is when one does not take his medication that it  becomes    full blown AIDS. So whoever tells  you it’s going to kill you please educate him  and  tell  him  there are many diseases that kill faster than HIV/AIDS”. She then pointed at  me and said ‘Mr. X how are you?’, I did not answer her because I was still dodging her and I did not write ‘X’ on my hospital card . I  registered my name as  Kadukadu K . Again, she called my name and pointed at me , and said ‘I am talking to you Mr. Kadukadu K who is now  Mr. X’,  I reluctantly smiled and answered her .

”That was how I now met Dr. Kayefi again after 10 months of meeting her in an hotel where she came  for an Health programme. I now recollected the whole episode  and  knew where my story began and ended.

”It was one evening about two years ago ,when  my company sent me to attend a Seminar in an  hotel . Another Workshop  was being held in same Hotel under the Ministry of Health. After the end of the  first Workshop many interacted . As a woman was passing bye , she was being called by another  woman who I believe was her colleague. The mere mention of ”D. Doctor” scattered my brain , and apart from that she possessed all the statistics I wanted in a woman —brain and beauty. I abandoned the second  segment of our programme and did not leave for home that evening since I was still a bachelor .

”I called the doctor and told her how I fell in love with her, and we exchanged numbers. She smiled and told me she needed to go but I invited her into my room, Room 322. In the evening she came as promised  while I  made effort  to have sex with her but she refused . She  said  since she is a Medical doctor she  knew the implication of such a thing. She in all honesty and sincerity said we were both strangers to each other and did not know each other’s  HIV status.  I  pleaded to her  that I wanted to romance her and cool my ‘tension’ . With my sugar coated mouth  she succumbed to my demand and undressed. We had a good  romance and no sex as  agreed  .We went into another second round of   romance again . I held her tight as usual but before you knew it I had forced myself in  , and  she screamed   ‘Whaaaaaaaat? No, no.But Why? Why?. U made a big mistake and a big risk. I thought you are matured enough to hold on and romance only. Poor you.Damn you. What if I am HIV positive?’. She left and we were just calling each other on phone without meeting as each of us claimed we were busy at work.

”When I became sick , and stooling  with   rashes on my body  , I  was asked to do some tests  including HIV. That was when I ran into her at  the hospital where she works but I  kept  dodging her .

”After counselling us , she called me to her office and said ‘I have been seeing you for the past three weeks coming to the hospital  but  each time  I tried to approach you, you always avoid   me and our profession respects confidentiality” .

”She continued  ‘I have been battling with HIV  since 2001. And when we met  10 months ago I told you I was not in  the mood .Infact if  I wanted to have it I would  have used condom’. ‘She asked how many ladies I had slept with but I kept quiet and did not answer her .I told her my fiancee is in Norway  and  I was planning to join her soon. She advised me  to let her know my status .

”According to her , HIV no longer kill as she too had contracted it but  had three lovely children who are negative. She said ‘I contracted HIV through my husband who later confessed and we got married at last for I had no choice then and didn’t want to infect others. He died about two years ago and I had been using  vibrator to ease my tension  since I don’t want to go into any relationship . Don’t blame me , its your fault and moreover I don’t know whether you had it before meeting me. Go and tell your fiancée and if she is still interested in you fine, but mark you I cannot marry you for I had all my three children by cesarean operation.’

As she was talking  her phone rang .She rose  and said she had just been called to a meeting .

This is a true life story .It happened in 2007.The man is still alive