Since the Prince has become a King , he is no longer called a Prince but Monarch, Royal Father , Kabiyesi, Oba ,Alaiyeluwa , Igba keji Orisa  therefore  his lifestyle has changed while he has to abide with many rules and forgo many things , taiwoabiodun.com writes 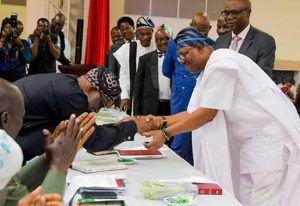 Haaaa eewo ni o,  Agbedo. Nba. No, no, Oba Alaiyeluwa igba keji orisa MUST not prostrate to greet ANYBODY again. Haaaa , eewo Orisa ni o,it is forbidden .He has prostrated for the last time to the Omolowos and Chiefs .  Whether old or young , and no matter your position in the society an Oba must not prostrate for you. 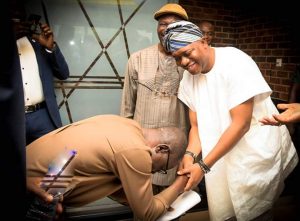 The Ondo state Deputy governor bows too,  it is compulsory

Picture above shows how the  Ondo State governor, Arakunrin Rotimi Akeredolu  bowed to greet the King-elect. The deputy Governor also did the same thing.Let the head of State come , he will bow down to greet the monarch if he cannot prostrate!.In fact his family members must now bow irrespective their status.If you are a Clergy man , or a Professor you must respect the throne and the crown, yes you must bow or prostrate to greet the King!

The  Oba –elect had prostrated and greeted the Omolowos and the chiefs for the last time when he was announced as the winner.

Se e raye? See life! Before he became the Oba he was bowing down to  his boss, the State governor Rotimi Akeredolu , now the reverse is the case!. That is tradition for you. Let the Head of state come to him, Olowo will not prostrate for him,That is our first class traditional King in Yoruba land.

In response to these  greetings   the Monarch would either   shake hands with the highly rated personalities if he wishes or raises his fly whisk to acknowledge their greetings.

The moment he became an Oba , he  will  no longer prostrate to greet anybody even his own mother who is in her 90s must kneel down to greet him. Now the old and the young will prostrate (if men) or kneel  (if women) down  to greet him. Remember Ebenezer Obey’s song   ” A ki k’Oba ni n’aro,  idobale laa k’oba oo toto oo Oba Owo ooo’’( You prostrate to greet the King).

Before Prince Ajibade became Oba he was free to  leave his head  open and  not wear a cap. But now as he has become a Monarch he can no longer leave his head bare open.And just any barber cannot barb his head 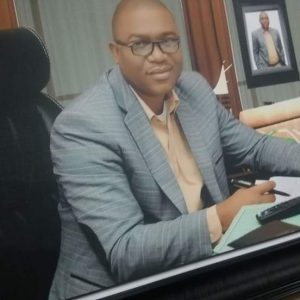 No cap here but now must cover his head always

again.He will rather call the Barber to his compound to cut his hair. He has become Alaiyeluwa , Kabiyesi Alase Ekeji Orisa ( second to God). It is believed that no one should see a Monarch’s head  whoever does that will remain wretched for life. No wonder all Monarchs wear cap at least to cover their heads. While some even wear their caps in the church  but few others  would not believing that God should be honoured .

Oba’s  words have become ase, thus whatever he says  will  surely come to pass and whoever he prays for  or curses, all  will come to pass.

It is mandatory for him to be  wearing beads  called akun or akon on his  ankles or wrists  and also on  his neck .It is not just any beads  any  but special beads that befits  his status.

The royal father must not just  sit  on any chair .His special royal seat is carried to wherever he goes as he must not sit on any chair in the gathering .Meanwhile he is now restricted as not all functions  will he  be going. 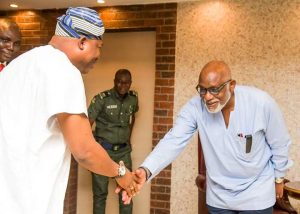 Yes, position has changed, wears his cap and the gov bows, it is compulsory

Haaa! Oba must not eat in the public , this is forbidden. Kai! Eeewo ni o. So therefore Olowo  can no longer  eat in the public places or go to the eatery to eat. This is a taboo for one should not see the King’s mouth or see how he puts a morsel of pounded yam or amala  into his mouth.

Fly whisk and Beads: These are royal signs .He would be going about with  a  decorated beaded fly whisk (irukere)  and beaded walking stick ( opa ileke) now, he would raise it up to respond to  greetings. And he must not dance in the public  except the traditional festivals like Igogo festival.

He will no longer go out alone as he would have his ”Guards’’ and his chiefs who will be adjusting his agbada and be saluting him while others would be blowing  special traditional trumpets and showering panegyrics ( oriki) on him.

He is no longer the  Ajibade Gbadegesin but His Imperial Majesty ,  the  Olowo of Owo, the  Ogunoye III.  He has become Orisa.All hail the King!.