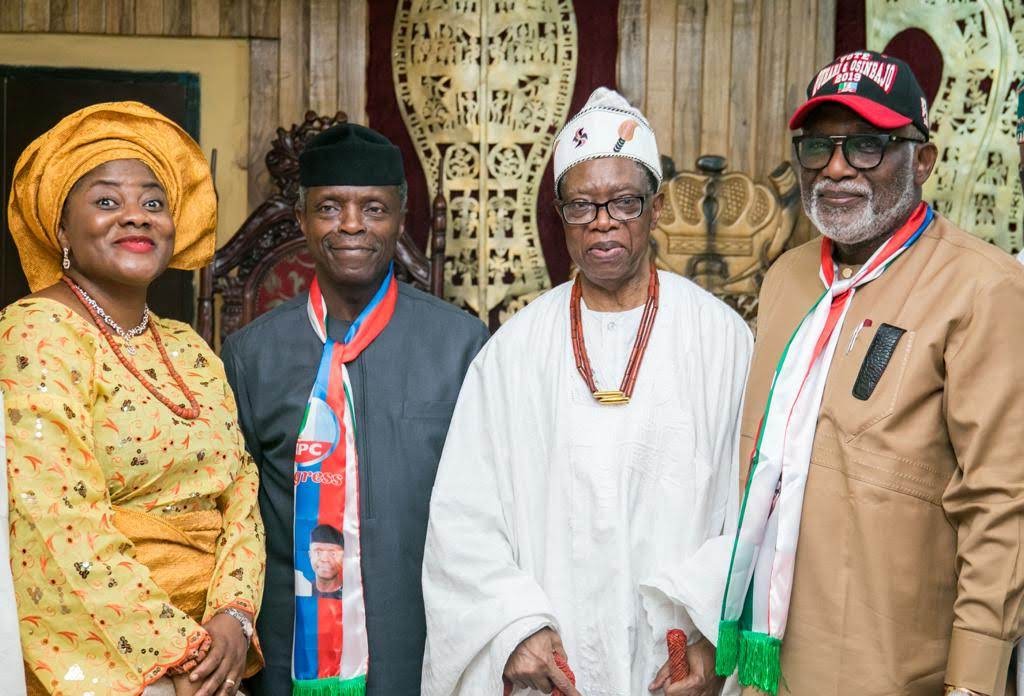 (L-R) Olori  Ololade Olateru-Olagbegi, Vice President (Prof) Yemi Osinbajo(SAN),His Imperial Majesty Oba DVF Olateru -Olagbegi III (CFR) and  the Ondo State Governor ,Arakunrin Rotimi Akeredolu(SAN)    These  great  four legal luminaries were  in Owo recently. But do you know they have many things in common.
HIM Oba DVF Olateru-Olagbegi III
While the Monarch ,Olowo of Owo  Oba (Dr.) D .V.Folagbade  Olateru -Olagbegi III (CFR) is a Lawyer and was a lecturer  and  former  Secretary,  Council of Legal Education [ NBA]. He was former General Secretary Nigerian Association of Law Teachers. Now a first class traditional ruler in Nigeria .He is the  head of Owo  community.
He is a Christian .He attends The Redeem Christian Church of God (RCCG).He  does not miss Holy Ghost service which is  hold every month along  Lagos /Ibadan express way.Our father at his age also has grey hair full of wisdom.He wears cap to cover his head as tradition requires.
Professor Yemi Osinbajo (SAN)
He  is a Law professor and  he taught for many years .  He also holds many chieftaincy titles  .He is a staunch  Christian. Osinbajo  attends The Redeem Christian Church of God (RCCG) and does not miss  the monthly Holy Ghost service    along  Lagos /Ibadan express way.
He has grey hair on his head. He wears his ‘Awo’ cap always which has become his trade mark.

Arakunrin Rotimi  Akeredolu (SAN)
He  is a Lawyer. He  is said to be  once a teacher  and he holds many chieftaincy titles too. He is a Christian as he attends church service regularly .He has grey hair on his head. He wears cap  possibly to cover his ….head.

Olori Ololade [Yeyesa] Olateru-Olagbegi
She  is a Lawyer and  presently a senior  lecturer at Adekunle Ajasin University , Akungba -Akoko, Ondo State. She is the Yeyesa of Olowo of Owo , the highest traditional  title for the Monarch’s wife. She is a Christian as she attends The Redeem Christian Church of God(RCCG) and does not miss Holy Ghost service held every month at Lagos /Ibadan express way. She might possibly  be growing grey hair but since Olori does not leave her head open. She covers her head as the custom requires.
These four legal luminaries  are all happily married with children.

The only difference is that Olori is a female.