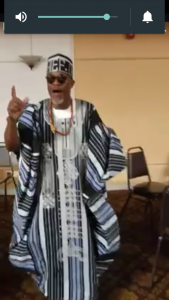 As my   cell  phone  rang I picked  it and looked at the Calling Line Identification . It was very unusual for the caller to call  at that unholy hour.  The caller was not strange but the  voice was unusual for  he was not in high spirit as he used to be . He  now spoke in hushed  tone .His voice was cracking  and shaking , infact his voice was  hoarse and his words  were incoherent .  ”Babalawo of the Nation I called you last night  but you  switched  off your phone. Brother Gboyega  passed on last night”, the caller said. I responded  ”Repeat what you said Lobo  , and he repeated it as he now  spoke in Owo dialect ”i brother Gboyega Aruwajoye Chief  Oloja  ti ku o”, he then burst into tears . I screamed ”Whaaaaaaat?”.  I then switched off my phone.

I was devastated . I was rattled. I was dumbfounded. I was shocked. I began to sweat ( in the cold weather) like Christmas goat who sighted  a kitchen  knife. 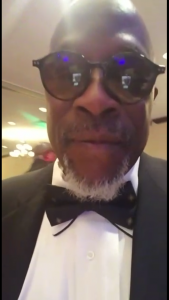 I screamed  ”Ah! akuko ko l’ehin Omokunrin”. I broke down and wept. I could not sleep again. I   could not call Lobo Agaun my friend who passed the information to me   to ask him questions . I could not do anything . I was furious and within a second I  was temporarily insane. I visited the loo six times  thinking it was a bedroom. I  ran out looking for the car key . I dashed out calling Ronnie to open the garage having forgotten that  she has  gone to work and the car was not in the garage while the key I was holding was not a car key but door key. I thought of driving  to the family house at Owaluwa  to sympathize or commiserate with the family  but I later  discovered where I was .Haaa, this is not Owo , Owo is far  from here .Kai , this is America !. 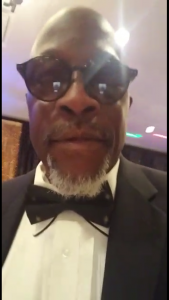 John Donne  said it all that Death be not proud , though some have called thee Mighty and dreadful,for thou art not so,For those whom thou think’st thou dost overthrow,Die not, poor death ,nor yet canst  thou kill me. One day , yes  one day the gragra of this monster called Death will  be put to death one day. 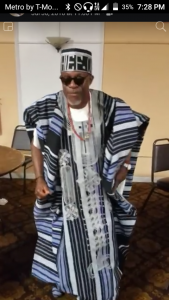 Iku a pe eni a npe 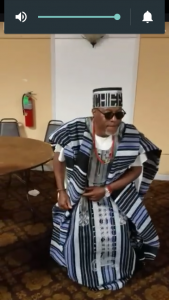 No, he did not die from this pandemic called Coronavirus as rumour began to spread and people were asking the nature of  his death. I know this very well. He has been sick for a while and anybody could fall sick. Infact sickness will not announce itself while death too will never tell you he’s  on the way.

I remember when the late Chief sighted me the first time in St.Louis in an Hotel where the World Council Association of Owo Indigenes  held their Convention two years ago  , he  cried  ”Babalawo of the Nation ,Bobo T, T Bobo where is your opele, where is your Ifa?”he jokingly asked   and added  ”thank God you are here your talent will be rewarded here. Don’t worry you will enjoy your stay”  .When the story of Dele Udo’s  was published in Nigerian  and foreign newspapers;  Reunited after 37 years   of which World News Day  published and received loud ovation , Gboyega  and Agaun celebrated it alongside with my wife at African Palace for  they knew the lady, Angelle Udoh who patronizes African Palace Restaurant in St. Louis .That was when  I started adjusting to the environment

Few months ago when  he arrived from Owo after the Olowo of Owo’s installation, he spoke glowingly about the royal father, he asked me to come have an interview with him, he  swore  and said ”Olowo did not collect a dime from  me , sincerely speaking  I appreciate him”. Gboyega was rich in manner, he was a man full of ideas.He was witty .He was a lover of people and he was loved too. He would never  talk ill of anybody instead he would say ”settle it, settle it” and that is all. 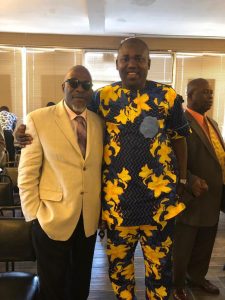 He is now free , free from all struggle after all did a French proverb not say ”Life is like an onion that one peels crying ”, he is no longer peeling onion, crying . He has joined the Saints. All the struggle  has ended , he no longer struggle like us -the living , and who knows the next person to answer His call, so Marcus Aurelius was not wrong in his words that ”The art of living is more like wrestling than dancing”.

Gboyega is no more in debt , he has been freed while the living continue , he has transformed or metamorphosed to the spiritual world and  it is the living  who are still in debt as the Book of Common Prayer of Church of England is quoted ”In the midst of life, we are in debt”. 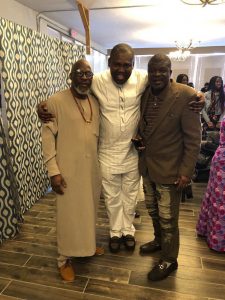 Gboyega, Agaun and Babalawo of the Nation

Did Samuel Johnson not say ” It matters  not how a man dies , but how he lives?” Chief Oloja lived well.No man has ever reported him of any fraudulent activities. His yes was ‘yes’ while his no was ‘no’.

”Babalawo of The Nation please tell Ronnie to let us  meet at African Palace or should I come and pick you up?”, he asked many times .And at African Palace he would ask me and Ronnie, my wife to eat, drink and be satisfied. One day he told us why he stopped taking alcohol . ”You see a Police officer  stopped me , and I stopped . Later I remember that if  I should  smell alcohol it will be a big trouble , since then I had stopped taking any alcoholic drink ”, he said and continued the story ,” You see when  I stopped the en

gine and when he was coming towards me  I  sped off. I was surprised that he did not run after me”.

The Olunaun of Unaun ,Prince Olanrewaju Abegunde burst into tears on phone , he said ” Gboyega was a star, a loving friend ,  kind, humble and full of simplicity, he   could not hurt a fly . He struggled   to make a living legally in America .He was a very successful man . He maintained his dignity and protected the Aruwajoye  family name. Yes , that is Gboyega for you”.

He was full of  stories .The last time we met was when I went to  see him at ‘Home’ where he was being treated, he summoned courage and said he would be okay .Infact he was bubbling but Aisan lo see wo , a ko ri t’Olojo se.

Ronnie loved him so much that  she always called him to African Palace to  dance , she said ” He knows how to dance our American dance , he could dance and  he dresses very well ”.Gboyega would tell me that ” this Ronnie your wife is a special woman , you are lucky to have met her type ”

And the question I am asking is ”So they will bury that handsome man with white beard? .So his glittering skin and white teeth will no more be seen?. The jokes are no more ? .Well, we are all going the same way but only at different time .

Rest on Oloja , and keep on smiling after all  we will all return home whether we like it or not for the world is like a market place, where you purchase your goods and must compulsorily go back home no matter how late.

For Aruwajoye his smile would be dearly missed by all especially in St.Louis here in America where the words of George Burns come into action that ”Happiness is having a large  loving family in another city” .

Bode Fadeyi wrote ” I have known him for over 50years right from Owo in Ondo state , he was always full of life , very lively as there was no dull moment.He was always ready to help.He would be greatly missed”.

Pastor Omiye wrote ”Its with heavy heart and great sadness but with perfect submission to the will of  God  that we announce the sunset of Chief Adegboyega  Aruwajoye on Sunday March 29,2000, May his gentle soul rest in peace”.

For the family and friends let us give him a befitting burial, it is sure we shall all go one day ,after all Marcus Tullius Cicero says it all that ” the life of the dead is placed in the memory of the living , his memory lingers on in our minds”.

God giveth and He taketh.Yes , he  has an aged mother , but what do we do? .If he had become insane or in vegetable state we would be praying for him saying if …..and if he were still alive we would not be at ease seeing him groaning in pains. Let us take consolation in John 3:16 that says For God so loved the world, that He gave His only begotten Son that whosoever believeth in him should not perish , but have everlasting  life.

Adieu Chief Gboyega Aruwajoye we shall meet on the the resurrection day. Sleep on and rest well .