Exactly 14years ago when this ‘Yoppie’ motorcycle (Okada) was placed at this roundabout called CIROMA .It is named after an Okada rider ,Olumide Olatunji ( aka CIROMA) who was kidnapped at the Ojude Oba party and killed during Ileya festival in 2004. taiwoabiodun.com reports 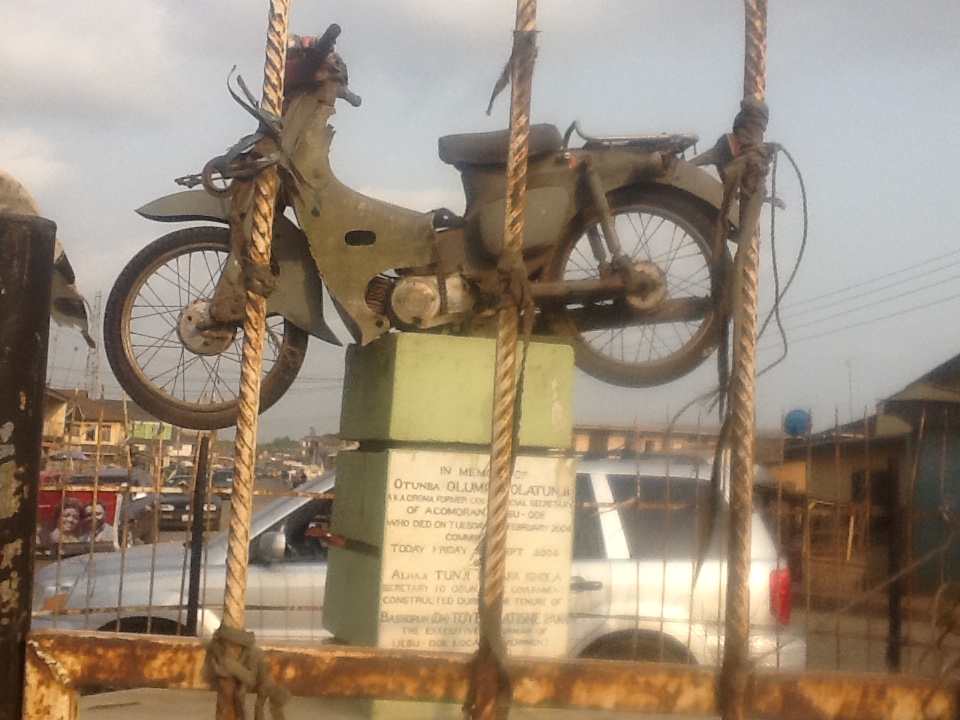 THE OKADA AT THE ROUNDABOUT IN MEMORY OF CIROMA 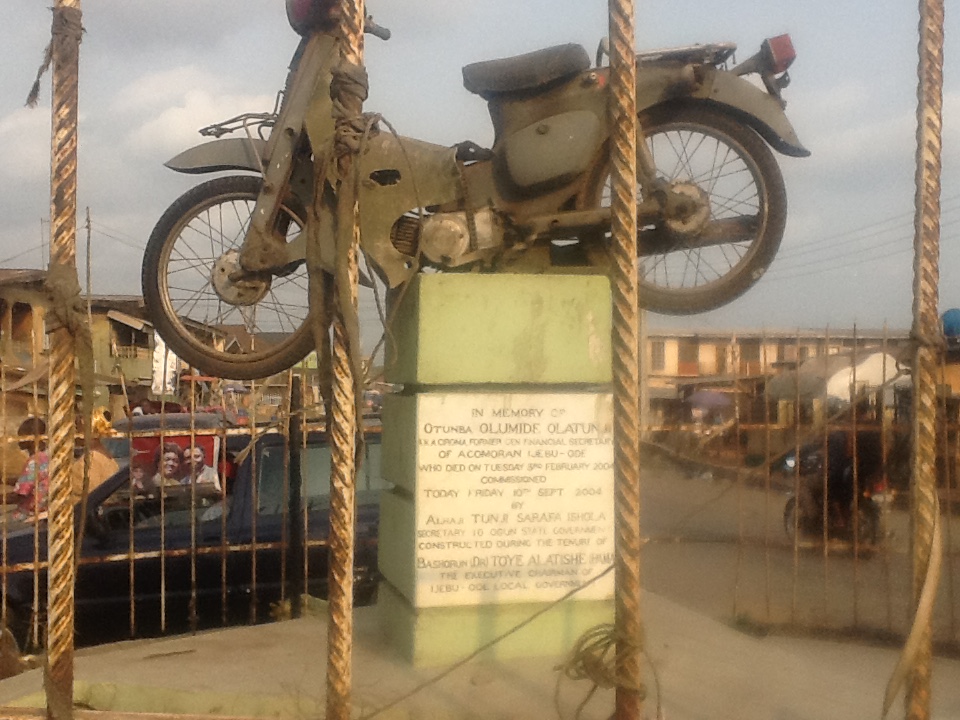 HOW HE WAS KILLED

As CIROMA was sighted by some suspected armed robbers who overheard him while calling his colleagues to come and protect the visitors and guests at the Ojude Oba party the men of the underworld seized him , bundled him into his own car boot and drove him away. His decomposing body was later found on the 10th day at Okunowa express way , Ijebu Ode.This is how an okada rider narrated the ugly story .
As Olabisi , wife of the fallen hero began to speak ,tears cascaded her cheeks and with voice laden with sorrow narrated her own story ” in 2004 September during the annual Ileya celebration of Ojude Oba festival when a popular Yoruba musician ( names withheld ) came to play . I learnt that my husband was intimated that some armed robbers were around to unleash terror at the party and he quickly alerted his Oodua Peoples’ Congress members who were also the security personnel in the community, unfortunately these men of the underworld overheard CIROMA while alerting his members on phone to come and save the situation and that was all. And he was not seen again until on the 10th day when his decomposing body was discovered in a bush at Okunowa, near express-way of Ijebu Ode”.
Corroborating Olabisi’s words , Comrade Wasiu Ibrahim one of the Okada riders said the late CIROMA was a gallant fighter , who fought for his people , he said ” it is true of what the wife said ,the late Olatunji was our leader in this community , he was the General Financial Secretary of Okada riders Association and was useful for us all. He was at the Ojude Oba festival and was intimated at the party that some touts were fighting , he was called to come and settle the rift , and that was all .He was never to be seen again. While some claimed it was some robbers at the party that bundled the deceased into his own car boot , killed him and dumped his body in the bush .They said the armed robbers overheard him calling the security men and informing them of the impending doom. We heard that was what happened”, Ibrahim continued ” he was not seen that night and the following day until his people and vcolleagues started searching for him .His decomposed body was later discovered in a bush 10 days later”.
Ismaila Abiodun, another Okada rider said the fallen hero was a peace- loving man who was ready to lay his life down for anybody , ” the news jolted us, we cried and cried but up till now nobody knows who did the wicked act”, Abiodun lamented
MYSTERY OF THE OKADA
The monument which was erected since September 18,2004 has remained sacred..Despite its location nobody ever attempted to steal it. In fact, the monument is taken care by the Okada riders – his living colleagues who tidy the place always , which according to one of them is the only way to honour the fallen hero.
To a novice or a visitor to the environment , one would think that the displayed Okada motorcycle is to warn riders of its danger that had made many lost their limbs and therefore as a warning signal to desist from their reckless riding as this reporter was erroneously informed. But when taiwoabiodun.com demanded for the reason for placing it there, he was told that it is in honor to a fallen community hero – an Okada man, who they claimed disappeared mysteriously during the Ojude Oba party at an Ileya festival in the town 14years ago.
Thus , honoring the fallen hero corrected the impression that all Okada riders are roughnecks, not serious -minded and irresponsible .

GREAT HONOUR
Comrade Olugbenga Odugbesan described the day CIROMA was buried as a memorable day ,” Infact the then ruling governor , Otunba Gbenga Daniel was there to honour the fallen hero because of what he has contributed to the community . Odugbesan said “The Local Council chairman, and the present Oba of Ososa implored us to honour him by naming this roundabout after him for his contribution to the community. This was why a brand new motorcycle (Okada) called ‘Yoppie’ was put at the roundabout for his remembrance while the roundabout was renovated , designed, painted and named after him, but instead of his real name it was his nickname , CIROMA , that everybody knew him for was written there and till today , it is called CIROMA roundabout”.
An indigene of the town,Kehinde Olugbode described the monument as great and of high value, he said “since the Okada had been placed there about 10years ago nobody has made any attempt to steal it , nobody, and that shows how revered he is” , he said .
THE MAN ,CIROMA
The late Olumide Olatunde (aka CIROMA) was a powerful young man with huge stature and was an Okada rider who rescued and assisted his people when needed. Infact he was a local freedom fighter and activist especially for his ‘constituency’ ,Okada riders’ Association where he was the General Financial Secretary.
According to Olusola Olabisi , the wife of the late CIROMA, her husband, the late Olatunji (CIROMA) was an Okada rider and also the General Financial Secretary of ACOMORAN, Ogun State Chapter, he was their strong man who used to champion their cause . She told taiwoabiodun.com of the great assistance he used to render the Okada riders when needed which made him popular , her words “there was a time when Okada was banned in Ijebu -Ode here but my late husband , CIROMA kicked against it and fought for its restoration , and the ban was lifted. He was always called whenever there was any problem which he always solved. Unfortunately, in the end he was mysteriously killed”.
MEANING OF CIROMA
When his wife was asked why he was called CIROMA, she replied “that was his nickname , you know all these Okada riders have one nickname or the other , so they are called what they want or their friends gave them , it was his friends that used to call him CIROMA.”
Damilola , one of the daughters of CIROMA said his father was humble in all totality .When asked whether she would step into her father’s shoe , she replied “Oh, I wish I were a male child I could have continued unfortunately we are all girls , and we cannot do it , we are all women. If even I wanted to go into the business my husband will not allow me “, she said as she started crying again.
UNFULFILLED PROMISES
Madam Olabisi , wife of the late CIROMA said she is always sad each time he remembers Ojude Oba Day and whenever she passed through the roundabout, her words. “I must confess to you that each time Ojude Oba festival is approaching I am always sad because I would remember my dead husband , how we discovered his decomposing body in the bush and his killers were never found”.
But she however confessed that she is grateful for the honour and respect given to her husband by Ogun State, and the local government especially his Okada Union workers,”though it was a bad day seeing my husband being lowered into the grave in his early 40s , but I thank all those who came to honour him and dedicated this roundabout for his memory ” .
She with her daughter , Damilola however chorused “nobody fulfill the pledges they all promised the family , we are hungry “.
NO MARRIAGE AGAIN
Olabisi said she cannot remarry again when asked whether she would remarry and continue with her life , she said ” what type of man will I marry again when my children are giving birth? I am already a grandmother and I don’t need a partner again, what for?” , she asked , as her lips parted with a smile,the first time she would smile during the interview.
Error
While the dates on the epitaph cannot be relied upon as the deceased’s family and friends claimed he was killed in September ( not February) The epitaph’s dates could have been wrong.
Editor