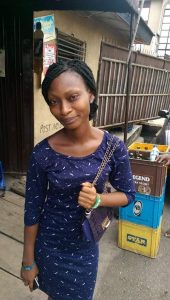 …….Pastor asked her to bring  her  Visa for prayer

…..Church  collapsed on her

……Was seven year-old when mother died

On that Saturday morning  she listened to the radio jingle of  a Church called Right Hand of God Miracle Ministry which was on  air announcing miracles. Having been out of College of Education , Ikere -Ekiti for years without a job, and was planning to travel  out with her Visa  and still a Spinster and also  looking for a responsible husband at her age 31 , she then thought her solution was on sight . That was how Damilola Coker left Owo her home town on Sunday 15th of March  and went   to Akure , about 35 kilometers  searching for the Miracle Church.

When she narrated to the Overseer , Pastor Alfred Shitu  Awise of her problems , the pastor asked her to bring her Visa to church for prayer and aside this death has been lurking somewhere in her journey ready  to strike her . He convinced  Coker  to come and   spend seven days within the church premises under spiritual incubation ( abe abo) for her to avoid death.

Coker ran back home and took  her personal effects on  that Monday morning  of 16th of March   and quickly went back to the  church as the Man of God instructed. Four days later , in the  evening of Thursday , 19th March  tragedy struck as there was a   downpour  and thunderstorm. All church members ran helter-skelter while Coker too ran out of the church for safety  but before she knew what was happening the death she was trying to avoid met her  as the wall of the church building collapsed on her . She was pronounced dead at the  State  Hospital, Akure  while her remains were deposited at the State Hospital’s mortuary .That was the end of a lady who  struggled to be somebody in life as she had the whole world in her hand. 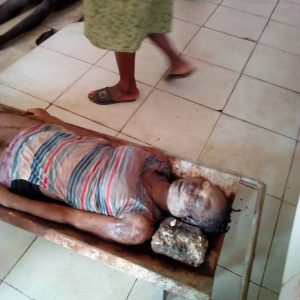 Her remains were buried at the St.Andrew’s Cathedral Cemetery , Uselu , Owo-Ondo State amidst tears as family and friends attended the burial .

.”What pained me most  is that she struggled and did not marry and had no child as she said she  did not want to be a liability on any man before going into marriage”, her sister ,Mrs. Fashola Muyibat lamented as she cried profusely during the interview. 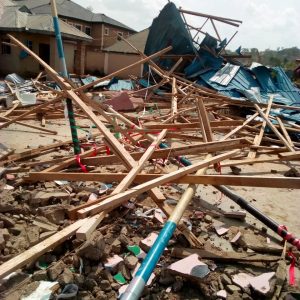 Part of the collapsed Church building

After graduating  from Ondo State College of Education  some years ago the late Damilola searched for a job but nothing was forthcoming  until  she decided to go  into business as she did not want to be a liability on any man. She   struggled by  doing petty business to eke a living . Recently  she   secured a Visa  to  the United Kingdom to better her life . She was to pay for her air ticket when tragedy struck.

From the  dust we came  and to dust we shall return

Her younger brother ,  Dele Coker  said ” we were living together in Owo here when she told me she heard a Church’s jingle over the radio that was performing miracle and she decided to go there hoping to be spiritually strong and be closer to God. 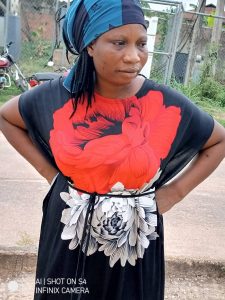 Interview with Dele and her sister

She went to the said  church on Sunday the 15th of  March . She  came back and said  the Pastor   asked her  to come back  for spiritual incubation for seven days .She told me that the Pastor told her that the  Visa she had with her needed to be prayed upon for death was pursuing her everywhere  she went and this could affect her where she was going. That was the first time she would go to the church”. Coker continued  ” my sister  said the Pastor said she should come for spiritual incubation (abe Aabo) for seven days, so she left on Monday the 16th of this month  , she packed few of her things and left for the church ,she had just spent four days.   . On Thursday ( March 19) she called me in the morning to inform me that she needed airtime  on her phone of which I sent to her. Surprisingly in the evening of that day I received a call that she had an accident . I called my sister and we both went to the Church . While there the members were acting funny until I received  a call from same number that had been calling me  and the caller introduced himself as a Police officer and told us that Sister Damy had died and her remains had been deposited at the State Hospital. The officer then invited  us to the Police station. We went to Osi Police station and the police told us that there was rainstorm that destroyed the Church  building and fell on Damilola.” 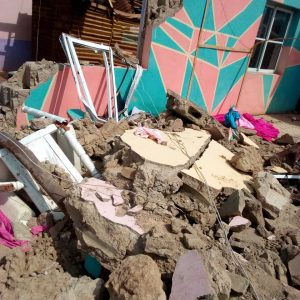 Part of the collapsed Church

THIS CALAMITY TOO MUCH

According to Damilola’s sister , Fashola said  ”Damilola lost her mother when she was seven  years old .Our mother died in 1997, she was seven years old then.We are from the same mother but different father . As I am talking to you now  her father is in his 90s , he is on admission  at Obafemi Awolowo University Teaching Hospital , Ife now unable to talk and using oxygen to breath.This calamity is just too much” .She continued ”whenever I  asked why she has not married she would say she was praying to get a responsible husband. Now she just  passed through this world without a child”. 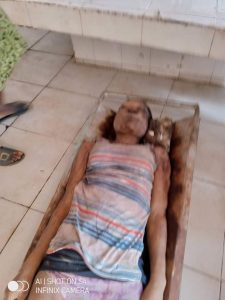 So Damilola is gone forever? 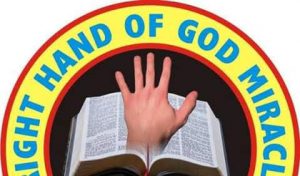 says …… I am afraid of the family of the deceased

…….It is natural disaster

When the said General Overseer , Alfred Shitu Awise   was    contacted on phone , he was sobbing  and said  ”The incident  touched me to the extent that I was  downcast .I am  now down. It is a terrible thing  that we never expected but it is a natural disaster .It hit many houses  and poles here.The OSRC even came to cover  it”. 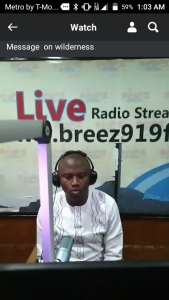 The General Overseer of the Church,Awise

On how he heard the news, he  said he was not around when the incident happened , ”it was after I  had left the Church on that fateful Thursday that it happened.They said the rain was heavy and it affected all the poles and houses. I was told  the deceased  was rushed to the  hospital to save her life .When they broke the news that the  doctor confirmed  and certified her dead we were down .They also rushed some affected  members  of other churches there. I am pleading whatever they asked me to do I will do it” .

Awise however added that he has been responsible for the burial expenses , he said ”I was  asked to buy the casket and we bought it , we  were  also asked to pay for the Ambulance and we did that too.We paid for the  vault. We paid for the report at the  Police station , we paid for the clothes  she would wear.We did all we were asked to do .Let us leave everything to God .I am not in good form , it has never happened in our church before . The rainstorm  affected over 70 buildings even in Shagari  estate which  led to many deaths”. 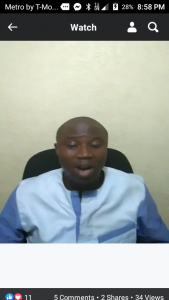 Pastor Awise said he was afraid to turn up to see the family and also  at the burial  for the fact that the family might be aggressive to him, he said ” I didn’t turn up because  they could be  aggressive and I don’t know how they will be feeling. When it happened  I ran to my brother’s place to stay .This is human being we are talking about .The family could be angry and deal with me .Such thing happened in some  other churches”.

WE REJECTED THE CLOTHES

However ,  the head of    the deceased’s family  Mr. Adedeji Rotimi said the church had not been fair to them at all , the old man said ” the Church  spent little money , infact the coffin  they bought was a cheap one and    we accepted  it like that but we rejected the cheap clothes they brought along to bury her .Why should  they send such cheap white clothe for her burial?. It is sad, even though the deceased was struggling , she was not that poor. The Church should have done their best .I am not happy at all. We bought a good lace material , under wears  and also stockings  to bury her .Who knows the dead could be looking at us, watching . To me the Pastor has not done enough. What stopped him from turning up?. Who will beat him?. We are not saying he killed our daughter but at the same time he is liable for if he claims natural disaster then let us look at the structure of the said Church. The church’s  building was not befitting and not strong at all.  Go and look at the ruins, too odd , very funny .Look at the woods they used as pillars. What type of country is this ? The Commissioner for environment should step in and stop all these hungry Pastors who called themselves men of God and are killing innocent church members”.

Pastor Awise said he is very sorry for what happened and had never for once had a bad record in his life , he  said ”when something happened people would say all kinds of things . I am on my knees begging the family to please forgive me ,It was a natural disaster. I know what it means to lose a soul. I am pleading ”.

He however  said the Church sent some members to attend the burial , his words ”We have the Church Committee   I want the members to go later I  would go to the family ,  I am not a trouble maker. I know it is painful”.

WE ARE GOING TO SUE THE PASTOR

However ,  the head of    the deceased’s family, Adedeji  said the church had not been fair to them at all , the man said ”  I can bet you that we are going to sue the Pastor and we are contacting our lawyer . Imagine the Church  spent little money , the coffin  they bought was a cheap one and    we accepted  it like that but we rejected the cheap clothes they brought along to bury her ” Why should  they send such cheap white clothe?.  The Commissioner for environment should step in and stop all these hungry Pastors who called themselves men of God and are killing innocent church members”. He continued ”Look at what happened to a church some years ago where over hundred of people died.

These Pastors would erect tent and called them Church. Here was Damy who could not hurt a fly.What a calamity.I am going to Court and I am ready to drag the case to a logical conclusion God help me.Let  both Federal and State Governments look into these structures. I am pained.”