Are you looking for the fruits of the womb, seeking for job, wants healing or wants to solve your marital or any  problem?. Go to  Egungun Festival in Ijero Ekiti , submit yourselves to  flogging by the Egunguns, or Egungun Aje or Oko Egungun and you will give testimonies the following year!. It is real. taiwoabiodun.com reports

It was exciting but painstaking .It was  fun  but a painful one. These masquerades of different ages , sizes  and status   flogged women and men , young men and ladies irrespective of  their  status and conditions  . 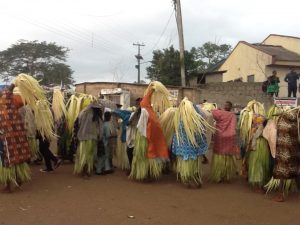 No, the Masquerades did not use their power or  force . Those   flogged   willingly and happily submitted  themselves for flogging   , yes they  voluntarily released themselves for whipping or caning by these Masquerades. These ‘victims’  happily  received  their ”blessings” in  good faith and thanked their stars for  having the opportunity of being  flogged  as they  prayed along .

RESULTS FROM THE FLOGGINGS

Yes, the following year those flogged would  come back to tell stories of joy , give testimonies of the blessings they received from the floggings from the Masquerades.Many said they had babies, got jobs, promoted at work among others. It is real , not  a story. That is how the Ijero- Ekiti in Ekiti State celebrate  their Egungun festival annually . 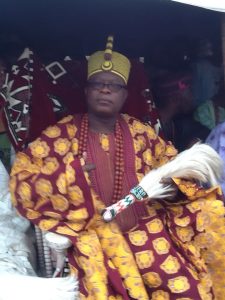 Watching the  over 500 Masquerades  comprising the young  and middle- aged ones as they all trooped out in their number with their long canes. They were all ‘dressed’ in their palm-fronds and covered their faces with different types of well -carved wooden masks. It  was interesting .

On that day they   shook the town to its foundation as they were  everywhere , they danced round the town with their canes .They  ran  around like a spirit-possessed man,they  pursued their  spectators and  visitors     while the the metals on their ankles would be making sound .At a time they all gathered and said  loud prayers in their native language .This has become an annual ritual as individuals pray for the town.
For Ijero Ekiti, the Ogun/ Egungun festival  lasted for seven days  as the   townsmen or natives  irrespective of their religious  belief went into frenzy in their wild jubilation believing their  ancestors  have come from the world beyond to deliver them  and solve their problems . Visitors, natives from far and near were present to witness the historic festival which   had been in practice for over 1,000years.
According to Joshua Oyewande  Olukolade , one of the community leaders  ” the festival lasts for seven days and it has been on for over 1,000 years.It brings the sons and daughters of the town together , people  come from United Kingdom ,  United States of America and from far and near to watch and especially for prayer which is efficacious .Now I came with some of my friends from Enugu to witness this historic festival”. 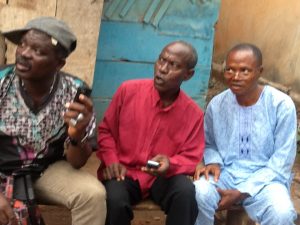 EGUNGUNS ARE OUR ANCESTORS FROM HEAVEN
Narrating how it started, the town’s monarch and head of the community Oba Joseph Adebayo Adewole the Ajero of Ijero stated ”This festival is called Ogun/ Egungun festival, we spent two weeks in preparation for it for the farmers would be at home to observe Ogun for they use Ogun’s implements like cutlass, hoes, and iron materials in their farm .That is why the Ijero sons and and daughters would come home  to celebrate and another means of  re-union of families. And our new calendar year starts when we ends the Ogun festival. Some communities only worshiped masquerades whereas we do  worship both Ogun and Masquerades together and it is only Ijero that observes that in Yoruba land!”, the monarch boasted .
On the Egungun festival the monarch said “For the Egungun festival we believed our forefathers came from heaven to stay with us for seven days and after the seven days they go back to heaven where they came from. And when sending them off all sons and daughters, visitors and friends would raise their voices to high heavens and  pray, ask for whatever they want   and for the progress of the town.The significance is to celebrate our ancestors and assess ourselves, improve on ourselves and move forward.” 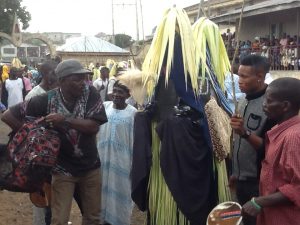 Abiodun during the interview

EGUNGUN AJE OR AKO EGUNGUN
Among over 500  masquerades is the most powerful one called ‘ Egungun Aje , or Ako Egungun  which is known to be very powerful and highly efficacious in prayer .According to the custodian of the Egungun Aje ,High Chief Samuel Obafemi the Aasan of Ijero  of Ijero Ekiti, ” I am the custodian of Ako Egungun  also known as Egungun  Aje , and in Yorubaland  it is only  the Ijeros that  have  this type of masquerade which is in Ijero Ekiti here .It has been existence  for over 1,000 years and ordinary person cannot wear it , whoever wears it has to be from the family of Egungun Aje or Ako Egungun and must be initiated into it .The Aje Masquerade (Ako Egungun) has and  holds a long spiritual cane he uses to cane people to receive  blessing”. According to Obafemi  , it is a blessing if one is caned by the Egungun for  it is believed the cane  has  both physical and spiritual healing thus many begged him to be flogged by Ako Egungun“. 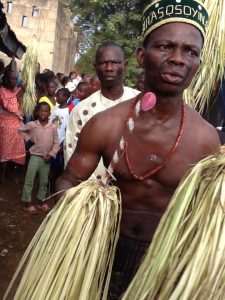 Corroborating Obafemi,  Oyewande said ” Yes ,it is true  , we call the cane Esisan and is being used , and the people holding them are families of Asosanyin .It is the biggest  masquerade and his cane is believed to be effective for any blessing so people even begged him to cane them.There is no bitterness in flogging people with it rather they offered themselves to be caned .It is believed that when one is caned by Egungun Aje this year  he would be praying to be caned next year .If it is a woman looking for the fruits  of the womb and she is being whipped by the masquerade that means her prayers has been answered for she would bring her baby next year , many can testify to this, go and do the research  ” , he boasted .

HOW EGUNGUN AJE CAME TO BE
On how Egungun Aje came to be , the monarch explained ”in the days of yore when children were falling sick and  were dying our forefathers brought Egungun Aje out to come and rescue the town and it cured people and released  them from bondage. So those who  fell sick were healed while progress came to the town  and it waded off calamity from the land.That is why we have been celebrating and worshiping Egungun Aje , we also called it Ako Egungun ( husband of all the Egunguns ).
On that evening the arrival of Egungun Aje charged everywhere as there was huge cries of happiness of his arrival while many ran to him to be whipped with his cane. Many begged him to cane him. A young man , Yemi Olutayo said he offered himself to be caned to receive his ( Aje Egungun) blessing .” I am glad for having the opportunity to cane me , it is a physical and spiritual blessing .I know he has answered my prayers  and my life cannot be the same again as things will improve for me next year”. 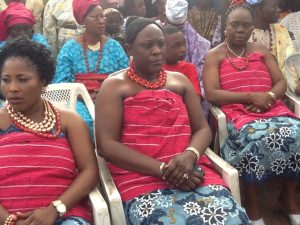 VIP women in the town at the festival

Princess Iya Seyi ( aka Iya Sewooo) said ” I struggled to get to where Egungun Aje is but  the crowd was too much , but I have prayed with his name to let me grow old and let my business flourish “

They all waited patiently till 8pm for the arrival of Egungun Aje or Ako Egungun to remove his mask.They raised their voices and prayed .And immediately the Egungun Aje removed his mask, they all jubilated believing their prayers had been answered.

As if they were congregation in the church the over 20,000 people who thronged the place raised up their voices and started praying in the name of Egungun Aje , to the surprise of this reporter .
Dr.Femi  Ayo Ajai , who came from Aramoko Ekiti said ” it is a belief and I must confess to you all their prayers had been answered .That is why people come all the way from America, London and all places to receive blessings from Egungun Aje .I have never for once missed this festival ,It is interesting and adventurous”.
At 8 o’clock in the evening  ( Sunday ) over 20,000  spectators including the monarchs from the neighboring towns and  chiefs  waited to receive prayers from Egungun  Aje  and everywhere went wild .Prayers were offered and immediately the  Egungun Aje removed the wooden mask  from his face to be seen , it was all over .And while many dispersed others were glued to where they were standing, praying!.

Who knows Egungun Aje might answer your prayers , so make sure you do  not only witness the Festival next time but also allow the Masquerades to flog you and be free from your bondage.