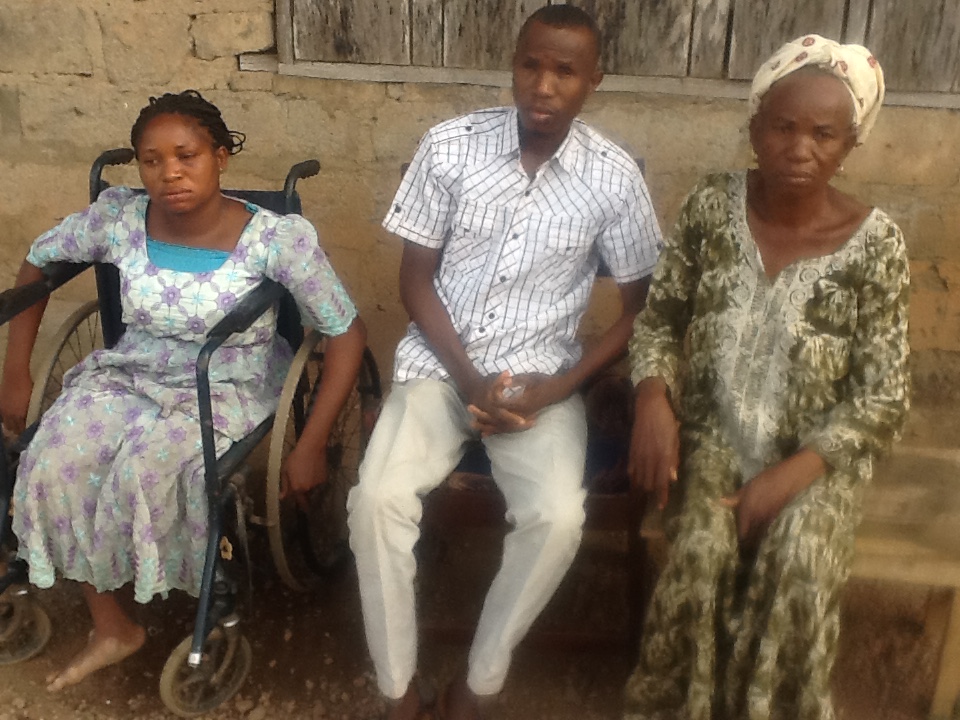 Agony  of  a  mother
Madam Comfort Olore is plagued with litany of woes. First, her first set of twins died at infancy ,another set of her twins left one behind and the last set of twins also left one behind. Not only this, among the two set of twins left behind one is now totally blind and was operated on its stomach while the other is crippled , all from same mother .Taiwo Abiodun reports
As the blind handsome Kehinde used his hand to search way for himself to come into the living room simultaneously his younger sister , Taiwo too crawled from the inner room with her withered legs .It was like a movie , not funny but pathetic!
Their mother arrived later from the market with two tiny tubers of yam to prepare their food for the day, and one could read poverty written on her face .
The mother who said she had been called names narrated her ordeal:
Mother
” My name is Comfort Olore I am over 60 years old . I am married to different husbands. I have three set of twins , the first set died at seven months ( premature). Another set came and when they were three months old it was only Kehinde ( now blind) that survived while the last set of twins came only Taiwo ( now lame) survived again.
”I have three other children living in Iyere, Ondo and Lagos but they are not financially okay. I have relations but none assisted me”.
She declared that she needs help , “I sell pap and that is the only source of our livelihood , but no money to buy corns now . I want assistance from good- spirited Nigerians”, she begged .
Will your daughter Taiwo not marry?, ” Some men do come to Taiwo but they couldn’t spend, they are stingy

while those who come after sometime would run away , I believe it could be because of her condition( lame)”, she said with emotion .
Asked whether there is spiritual undertone with what she is experiencing as many thought she might be a member of a secret society , but she declared ” I don’t belong to any society , I go to church”.

“My name is Kehinde Asojo. I am 30 years old . I finished my secondary school at Adeyeri Grammar School, Owo, and I have distinctions in my subjects .I tried to further my studies when I gained admission to Rufus Giwa Polytechnic but due to financial condition I couldn’t go and I went to learn welding in Benin .My father died in 2010. We sold my father’s land and used the proceeds for my medical expenses in the year 2016 when I had a gastro intestinal operation , I couldn’t go to toilet and thanks to some doctors and good- spirited- Nigerians at the hospital ( FMC, Owo) who contributed money for the operation .
Strange wire
Kehinde has been crying over the pains he is having from the stomach where he was operated on , he said ” last November I started seeing the wire used for the suturing of the operation coming out and showed it to my mother.I didn’t go back to the hospital to report. This operation was done in the year 2016 .I am in agony , I am in pains .I have lost my two eyes as a result of glaucoma.
“I had a girlfriend before but I lost interest when this problem came .I have been like this since 2014. I wish to further my studies and go to Special school but who will assist me 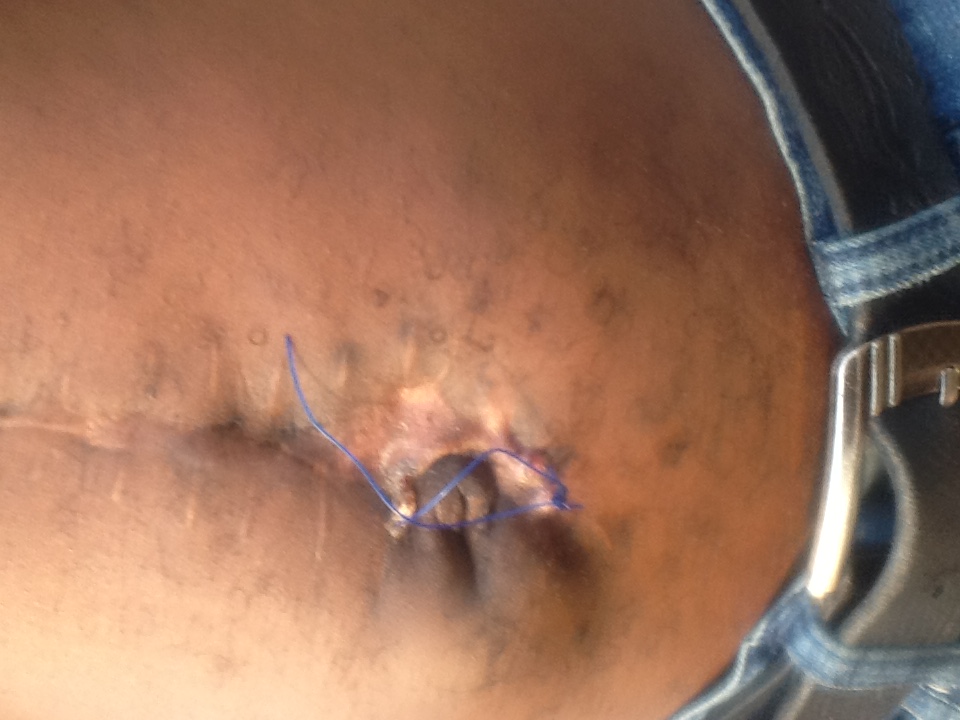 Taiwo’s tommy:The operation was performed in 2016, and the suture or wire  coming our  November 2017, he is in pain.

She  grabbed the edge of her skirt , crawled to where her wheelchair was and mounted it in the corner of their living room without a furniture.
“I am Taiwo and I am 24 years old, my Kehinde has died long time ago.I am not of the same father with the blind Taiwo. My condition was not like this when I was born ( her mother argued that she was like that). This wheelchair was donated to me by one sister called Titi. Things are not easy with my mother as she struggle to meet up our needs.I was learning knitting before but my boss was very hostile to me that was why l left.”
Taiwo wishes to learn a trade if assisted.
The family lives at Express- Ikare junction, Owo, Ondo State.