…..Why I changed to Giraffe

…..I was ‘arrested’ on River Mississippi Bridge

…...Ha!  what I saw at the Bank of Mississippi River 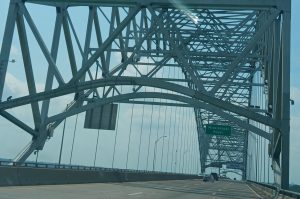 I  was   glued to my seat  and  my mouth agape when  I sighted the    rigid-frame bridge .   It was awesome .It was  massive . And when that early  morning sun  beamed  on  the bridge,  the steels    shone like millions of stars  in the sky while   the silver color    showed   the aesthetics   bridge design  . I was almost blind  when  I fixed my naked  eyes on the shining  bridge. The   bridge   displayed  its beauty as the car moved slowly over the bridge . I sighted  pool of water on the road but  always  disappeared  each time  we got closer- not knowing it was a mirage .I then  recollected   that  we were taught about it  in  secondary school. Yes, the bridge    is   as  strong  and solid as the rock of Gibraltar .

On the Mississippi Bridge

I WAS ‘ARRESTED ‘ ON MISSISSIPPI BRIDGE

As I was  dancing to Bob’s  Marley music , suddenly I was    ‘arrested’ by an invisible  ‘Police’ but  trust me , Bobo T, T Bobo , BoN, Babalawo  Of the Nation , I quickly  chanted some incantations and then   ‘metamorphosed’ into a  giraffe .

I stopped peeping through the window glass and I unstrapped my seat belt and    stretched out my neck  through the  glass  window  to have a look  at the   ‘Police’ . Lo!  and behold the river   was   calm and cool  but moving slowly  and babbling . When I saw the beauty I appreciated the  aesthetics work of Arts . The  Structural  and  Civil Engineers who   designed  and   constructed   the iron bridge  did a brilliant job. The abutments , ledgers, the bridge shafts, barrier rails, deck, parapet etc were well constructed and built . 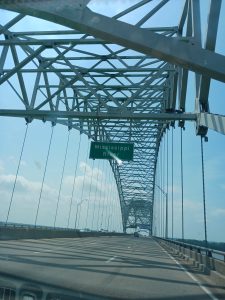 However , the river  was     deceitful with its calmness and coolness . As I  was  looking and appreciating   the beauty and   the construction of the bridge I sighted    the  signboard of Welcome to Mississippi River,  and I screamed ” Oh my God ! so this is the popular River they taught us in  elementary school. This is  the  wonderful River we all sang its song when young”. This is the third -largest river basin in the world I  thought in my mind  ”I wish our River Ògbèsè and Odò Òsé  in Owo  are as popular like this”. I unconsciously    started the song: 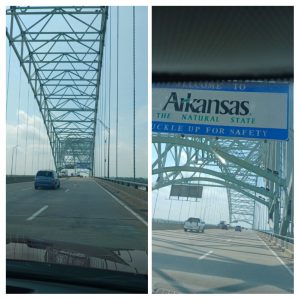 Part of Mississippi bridge that   connects Arkansas and Tennessee 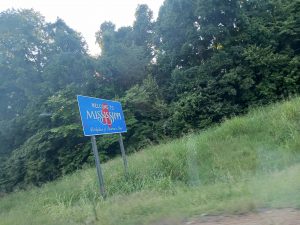 I sang, clapped and shook my body to the rhythm while  Ronnie who was behind the wheels sang along with me . It was hilarious. It  was  interesting. It was fun. 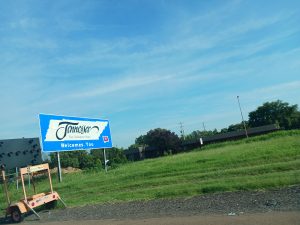 At first I thought  of  coming down from the car and be jumping up and down to dance. Yes!,  I had wanted to  display my acrobatic skills and tricks. But when I remembered where  I  was   and I kept my cool. I behaved or else….. Olopa a kan arrest me ni  and nothing go happen .If you like call yourself Bobo T, T Bobo, BoN, Babalawo Of the Nation, nothing concern dem o. Again I  stretched out my neck to view  the surroundings.  But there  was one thing I noticed: there was no sacrifice (ebo) placed by its banks . There  were  no black  clay pots with palm oil and eggs .  There were no calabashes wrapped with white satin clothes , infact there was no white clothe  that covered   any object and there were no sacrificial meat or bones placed by the riverbank. I  became  restless as I stretched out my neck ( remember I am now a Giraffe) again to see whether I would  see chicken or  pigeons with their stomach  ripped  open   and  filled with palm oil and cowries. There was no slaughtered dog or duck with palm fronds  and no broken clay pots with cowries. 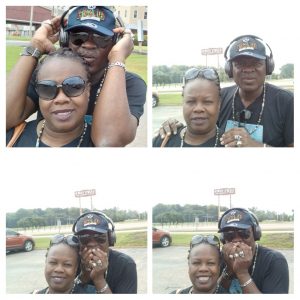 Tokotiyawo a lu bembe. All in  Tunica

I stretched out  my neck  to take pictures of  man or woman bending down to  pass excreta or  urinate into the river  but none seen .  No dirt  or refuse dumped around the place .The bridge was very  clean . Looking afar off one could see the boats and canoes that berthed .Here, there were no Area Boys parading unnecessarily on the bridge and nobody was running after our car punching our noses to buy  plantain chips or video CD .Nobody even ran after our car to clean the window glass or shield screen .Not a single  soul was sighted on the bridge walking .  I stretched out my neck again as I turned to Ostrich to see whether I would  see  any law enforcement officer  who would stop us and ask for our papers, but what I saw were Video cameras capturing everything !.

Later Ronnie asked in smattering Yoruba language  ” What is River Okese? And Odoo Hose?.” I laughed and told  her  that it is River Ogbese and Odò Òssé but   not as she pronounced it. We all laughed. I boasted that River Niger bridge is also as strong as this  Mississippi River.

As I sighted the river I could see  that the bridge linked  two states : Arkansas and Tennessee  where the popular American Country Music Singer, Dolly Parton was born . We drove into the Tennessee town and  had wanted to go to  Parton for an  interview  but no time.  However,   Ronnie promised to do that next time. Yes1,  I would have loved to ask  Parton about the Tennessee song  she sang .

MY TENNESSEE MOUNTAIN HOME
Sittin’ on the front porch on a summer afternoonIn a straight-backed chair on two legs, leans against the wallWatch the kids a’ playin’ with June bugs on a stringAnd chase the glowin’ fireflies when evenin’ shadows fall
In my Tennessee mountain homeLife is as peaceful as a baby’s sighIn my Tennessee mountain homeCrickets sing in the fields near by……..

As we arrived  Memphis  the home town of Elvis Presley  the King of Rock & Roll, I reminded Ronnie that I needed to take pictures of these states and show it to my readers that we passed through  the three states while going back home to St. Louis .

I   TRANSFORMED  TO OSTRICH AGAIN

As we passed the same bridge on our way back to St. Louis,  I used my magical power and  turned to   Ostrich, the Father  of all birds ( Ògòñgò Baba Eiye)  . I brought out my  camera and took some shots and videos. Walaitalai I took pictures  and asked questions . I asked who discovered the Mississippi river? .Now if I say it is Bobo T, T Bobo or BoN, or Babalawo Of the Nation that discovered it they could stone me   saying it has been there before I arrived.

But back home  in Nigeria  we would say and write that Mungo Park discovered River Niger . Was the river not there before Mungo Park arrived? .Then it was Lander Brothers  and so on. I told Ronnie that  I would write home and tell them how I discovered Mississippi , she laughed. 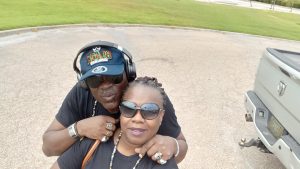 Now my throat was dry. My throat was demanding for  beer to push down the  smoked    turkey  lap Ronnie bought . Oloun ooo my  throat was asking for what we kept in the trunk . Walaitalai , Oloun ngbo my throat was saying” Bobo T, T Bobo , BoN, Babalawo Of the Nation go and take your Gin or Beer from the trunk”. But  if I dare took them and drank…… hhmmmmmm, if the car smell of kain kain, hnmmmmmm. Again, when I remembered that this is not …..eria I  quickly talked to my brain and  exercised patience . When we got home I slept off like a log of wood .

The following day   Ronnie said ” Last night  you   you were   snoring  and   uttering speech,  talking  about Mississippi  and that is called somniloquy. You  were  singing that song:

How will you feel if the late Elerewe is your Father, Brother,  Cousin, Uncle or your friend?. Tell me!

We  have all  heard -rumour or no rumour  .You know them . He knows them. She knows them.  We all know them . They know them. Their  children know them . The elders  in the community know them  even  toddlers know them. The killers’  family and friends know them . All Owo people both  home and abroad know them .The killers of Elerewe live with us. They live among us. They sleep in the community. Yes, Walaitalai  they are not ghost!. I repeat , they are not strangers, Laiye nwon kii ise alejo! . Asiri ti tu. Akara ti tu s’epo but time will tell. The fact is that many are afraid to tell the truth . All is a matter of time. Five years’ time, 10 years’  time , 20 years’ time the killers will reveal EVERYTHING!.

Let them run. Let them hide. Let them be assisted by millionaires. Let the power that- be  assisted them. Let them believe in their juju. Let them hide those AK47 guns  they used . Let those  guys  who corked and released the bullets   hide . Let them go to Church. Let them go to  mosque. Let them invite Marabouts to their homes. Let them spend money . Let them use all connections in this world . BUT GOD IN HEAVEN , WALAITALAI ALLAH  and ALL THE 2001 gods OF YORUBA LAND WILL NOT FORGIVE THEM. ALL THE IRUNMOLES WILL CURSE THEIR FAMILY MEMBERS.

The killers of Elerewe live with us. They live among us. They sleep in the community. Yes, Walaitalai  they are not ghost!. I repeat , they are not strangers, Laiye! nwon kii ise alejo! 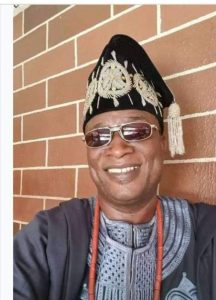 This is a special announcement for everybody :the late Chief Elerewe will be buried  on the so so and so date at so so and so time . Walaitalai , there is no date fixed for the burial. Bury ko, bury ni.

Elerewe continue to fight those who planned and killed you . Appear to your killers in their dreams . Chase them with sword and axe (Not cutlass) .You are still the Elerewe of Owo Kingdom .

Let one or two of the killers come out to confess. Let them quickly report themselves to the Police and have peace  of mind. Yes, I know some of the killers are reading this article. And God cursed Cain.. …..he later became a Vagabond. The rest is History.

To those who killed Elerewe  of Owo Kingdom don’t forget to target me o, olori buruku gbogbo, idiot. I owe you only one bullet even one stroke of ponpo is enough for me, who will not die?.Shiorr!

Four years ago we both said ” WE DO”.

Home away from home