How much do you earn per month? Are you on Federal or State  Level 14 or 15 ? . Does your pay check up to this beggar’s pay check? .Okay , this beggar claims he makes 30,000naira per day after a  hectic day’s job from his begging .

It was a sunny afternoon in Abule -Iroko, Ogun State  when these two young boys were sighted.  The older one was pushing the younger one on a wheel chair.As they were on their business trip  they were also laughing and cracking jokes along in their Hausa language.

When approached for interview they did not hesitate to answer.

Asked their names the older one said ” My name is Danjuma Shuaib, we both came from Kano. This is my brother , he is Musa.” 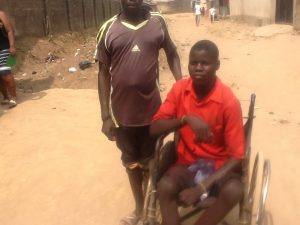 Asked where they came from and the two chorused ”Kano”.

On their marital status , Danjuma said he has two kids while Musa too claims he also  has  two  kids all in Kano, as he used his fingers to describe the number of his kids.

”What of yayamata? ”(wife), they both said they left them in Kano.

The two co-beggars claimed they have houses in Kano  and had been living in Alagbado area of Lagos/Ogun State for sometime.

However, watch this video and  listen to  the conversation between this reporter and and the beggars.

HOW TO START THE BUSINESS

On what it takes to be a beggar, just buy a wheel chair, then look for someone to push you around for a fee, that is all. Before you say Jack Robinson you have have made a fortune .After all it pays to be a Beggar