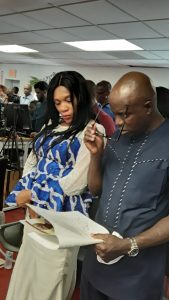 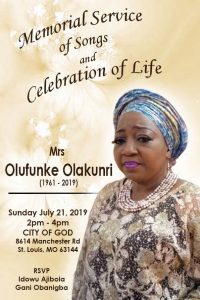 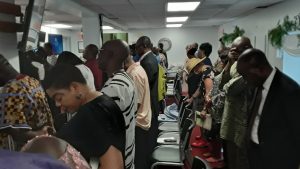 …She survived cancer 20years ago

She was my mentor and mother –Gani Obanigba

Yesterday, a Memorial Service of Songs and Celebration of Life was held  for Mrs. Olufunke Oyeyemi Olakunri at  The Redeemed Church of God (RCCG) City of God at 8614 Manchester Rd, St.Louis , MO 63144, America .

The  programme which was organized  by Gani Obanigba who was a brother in-law to the deceased was attended by many people from family members to friends and acquaintances.Pastor Niyi Aruwajoye the officiating Pastor implored everyone present to accept Jesus Christ as our Lord and Savior, he said  ” we came with nothing and will surely go empty handed ”, he counseled.Pastor Akin Aruwajoye also added that ”since no one knows when he is going it is better now to repent because we will all die one day”.Pastor Omiye consoled the family and friends and implored everybody to be strong.

The service  which started at 2pm did not close until after 5pm as everybody  was discussing about how nice the  the   woman was. A member of the family described how she survived cancer of the breast 20 years ago but fell cheaply and painfully into the hands of suspected herdsmen or killers, no one is safe again, she concluded.

Some songs were rendered as many used handkerchief  to clean their misty eyes . Among the songs are   On the resurrection morning , Soul and body meet again , No more sorrow, no more weeping , No more pains …. A woman could not sing along as she kept on looking at the pictures in the program and weeping profusely.

Mr.Gani Obanigba who is a brother –inlaw to the late woman described the woman as a nice, humble and a great philanthropist  who will not allow anybody to suffer.

According to Gani, ‘’ I called her my mother , mentor and God-sent. She facilitated my coming to America  and I shall for ever be grateful to her”., he said . 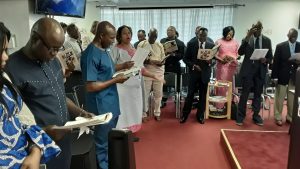 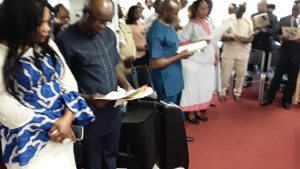 Pastor Idowu  ,described the woman as a rare gift to humanity whose life was brutally cut down.  He said ”She used to call me Uncle, Uncle and I too would call her Auntie , Auntie. She was a wonderful individual , woman of  accomplishment. She worked hard , blessed people and was a  strong pillar of the family”’

When Seun Obanigba held the microphone and was   about to speak about her , she broke down as hot tears cascaded on her cheeks, she could not talk.,

Born on June 11, 1961 in Akure to the families of Chief Reuben Famuyide  Fasoranti  and Frances Oladiwura Fasoranti who were both teachers .

She went to Ondo state Polytechnic where she obtained her HND in Accounting in 1983.

After her National Youth Service Corps in Omega Bank now Spring Bank . She later went to Lagos University to read Law, she was a pioneer student at Nigeria Law School, Abuja

As a seasoned Banker she worked with Citi Express Bank, Great Nigeria Insurance  and rose to the positions of Secretary in these companies .

She was generous to a fault,

She married Mr. Idowu Olakunri of the Elerewe Dynasty of Owo on February 15, 1985, and the union was blessed with two daughters ; Oyindamola  Weider, Oluwafeyisike  Omosehin  and grandchildren . Olufunke was survived by her husband, children sister  and many family members

May her soul rest in peace.

Those who were present at the event are ; Dr. Layi Olagbegi, Pastor Omiye, Pastor Niyi Aruwajoye, Chief Gboyega Aruwajoye, Dipo Okunrinboye,Mr and Mrs Kofo  Osun, and many others ,