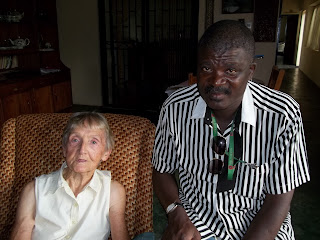 This morning I am wearing Black. This morning I am mourning .This morning I am in a sober mood so nobody should talk to me. This morning I am grieving  so nobody should call my phone . I am crying not only for myself but I am crying for the entire nation for not appreciating this woman . Come, sebi they gave out   Nigeria National Merit Awards  and gave   Post humous awards?. Why did we forget the couple: the late Tai Solarin and his wife, Sheila? .Are we ingrates or have we  forgotten the couple? .What a country! . So we have forgotten her kiakia niyen?. Nigeria we hail thee. So they did not deserve national honours or is it an act of  omission or commission ? . Next year they should be awarded , and if they are not honoured , I  along with Mayflower students both ex and present will protest. We will march from Ikenne to  the National House of  Assembly in Abuja .

She was a library. She was a  Griot.  She was rich in stories infact she was an encyclopedia of stories. She was never tired of me. A phone call will put you through. She would not tell you the time to come . No scheduled time .Unlike those so called  arrogant  millionaires who would be flaunting    their illegal or ill-gotten wealth and pacing up and down in their living rooms to show you how wealthy they are , no!, not for Mama . Mama Sheila as she  was fondly called would invite you into her sparsely decorated  living room .Her dressing was simple .She was modest in everything .

I vividly remember the late Abayomi Ogundeji who was the Editor of Sunday Desk  in the days of  The Comet Newspaper  who asked me to go to Ikenne to do a story on the late Tai Solarin’s anniversary . It was my first time to visit Ikenne and Mama welcomed me  to the fullest and answered all the questions I asked .First impression last longer , they say. Since then I have been their family member . And when The Nation newspaper  was launched  in 2007  the  then Sunday  Editor Mr. Lekan Otufodunrin would  say ” Babalawo Of the Nation  let’s have your Tai Solarin story, you have become their family member”. That was how I  covered the Solarins’ story till when God said  e don do for me at The Nation newspaper.   Mama was ready to give me all stories .   Ask her any question she was ready to answer.

WHAT I MISSED IN HER

I missed her if you don’t miss her. I know her worth and value . She was witty,  she was  an egghead and was full of wisdom. She taught me many things before she left. I was one of her students .  The education she gave me for the 10 years I covered her story from the defunct The Comet  newspaper to  the biggest and thriving Nigeria media House – The Nation newspaper was great.  She taught me what others can never have. She taught me what University education cannot teach you. She  was to me like    Socrates and his followers or disciples.  During my  journey in life I came across her and she was super. If you go to a rich man’s house he would feed you with food and wine but go to Mama Sheila she would feed you with knowledge and wisdom. She was  one of the few greatest Nigerians I  ever met.

I am in Black  dress, mourning

I remember that day . It was  Black Sunday . I repeat that that day was a Black Sunday . Today it  echoes, the messages ,  the telephone calls , my actions  .Yes I can recall all . It was a nasty Sunday . Yes , I didn’t go to church  that day .I remember it was around 2 O’clock , yes 2 O’clock in the afternoon . I could recall the time, date and all what happened .Today I recalled  that  day, the sun was shining and  the temperature was  very high. I was drinking my black coffee , yes I could remember . Then I was laughing hysterically   when I remembered something , Yes  it was  … no don’t let me tell you,  when suddenly my phone rang. gran gran gran , and then started  dishing out  my favourite Bob Marley Music. I allowed the music  to go on. It stopped.  Again the phone  Nokia 3310 rang  and I picked it  . Who could that be? . A voice came through  ,”Babalawo , do  you have Tai Solarin’s children’s cell number? I heard that Mama Sheila is dead , please help us to confirm’’, that was the voice of  Kofo  Osagie, a colleague from education desk  from  the office .  Immediately   I heard the name Babalawo  I knew it was from the office, for that is what they call me. I suddenly became cold. I stopped sipping my coffee. I became cold . Tears went down my cheeks . It was a day that my heart was punctured .It was the  day I missed one of my favourite family members I was never related to by blood. Yes , I sank into my sofa chair and screamed ”Oh my God”. Then I was a full staff  at  The Nation newspaper , then I was already the family member of the Tai Solarins. They all knew me ,my face was not unknown to the household except    Tunde  whom  I never met till date. Mama said  Tunde is a private person. But I was very close to Corin, who is a younger sister to Tunde.

I   was   shivering like Christmas goat and unstable like a floated leaf on waters. My   cell phone   almost dropped from my hand as if I was suffering from Parkinson syndrome. I   called Corin’s   line   the first child of the Solarins. ”Confirmed ”, she replied in a text message  and I wept like a baby. This was  the second time I  would weep in my life .The first  time  was when my mother died at 79 .

Few hours later   I started receiving   calls from  home and abroad asking me the full details and her last hours  as if I was there when she breathed her last.  .

I used to ask her many questions from sense to non sense , civilized to  uncouth,  foolish or wise yet she would  not turn me down. I have asked about   her  romantic life when she was young,  the medical problem she ever faced and she told me it was cervical cancer. I told her that I am a friend to her parrot as I sighted the parrot in her house,  she too told me that we were the same thing. I asked  her why she did not use walking stick , she replied ‘’ I don’t  need it’’. I have asked  her  why she kept  Ghanaians ,Togolese in her house , and she replied   ‘’ what is wrong in that  Taiwo? . They are okay’’.

Anytime I mentioned   the former Head of state General Babangida  she would say ”I cannot forgive him, he contributed to my husband’s death. Babangida   incarcerated my husband for months  just because  he was fighting for a just cause. Where are the leaders of yesteryears? But has he come here to tender apology?’’, she  asked.

I asked her why she did not go to Church on one Sunday morning   when I went to interview her, she responded  ”And why did you come  here on Sunday morning when you know I should be in church. Church? I don’t go to Church. I am an Atheist .I am always busy ’’. And when I told her it has been long since I went to church she was excited and   gave me a parting gift  , a book titled  Humanism By Barbara Smoker. Apart from this I have  other  eight  books she always gave me anytime I went  there for an interview ,these books are in my library.

Mama Sheila was one of the greatest Nigerians I ever met during my sojourn in journalism. She was a millionaire but chose to live a simple life. She fought for the Nigerian masses. She had wanted everything to be better  but today things are getting worse. Her voice was powerful. She was listened to . She criticized the government both the Military the Civilian. She admonished the greedy politicians who increased poverty in Nigeria.

She could have wished to go back to England and live  but chose to  live and die  in Nigeria. Can we have another Sheila again? . She had wanted History Subject to be brought back into the School’s curriculum. To  Mama , the military only came to destroy the country     while our politicians are just selfish and amassing wealth and impoverished the Nigerian masses.

Mama Sheila knew we would  all die and not go with   wealth. She knew that life is ephemeral. She was modest in everything . Her life was simple . While our millionaires wear expensive rags they called clothes , my Mama , our Mama would wear clothe full of wisdom , put on the cap of  knowledge . All these and many more will be in my Book to be published soon.